Accessibility links
Can Working Moms 'Have It All'? Ha! In the late '70s and early '80s, Enjoli perfume commercials extolled the era's ideal Superwoman — a perfectly coiffed working mom who could "bring home the bacon" and still be sexy for her man. Three decades later, that ideal remains elusive for millions of women — including reporter Jennifer Ludden.

Can Working Moms 'Have It All'? Ha! 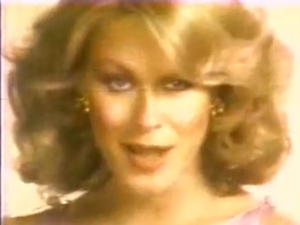 I still remember sitting enthralled, on the brown shag carpeting in our den, when the Enjoli perfume commercial came out in the late '70s.

A perfectly coiffed mother morphs from bathrobe to business suit to evening gown, while singing that she can "put the wash on the line, feed the kids ... and get to work by 5 of 9." Superwoman personified. I was in middle school and it spoke to me. And somehow my housewife mom reinforced that era's ethos that I could "have it all," which must have been the ultimate act of faith, considering her own life.

She'd been raised in an Iowa farming town, an ambitious egghead whose own mother had always scolded her to put down the book and pick up the vacuum. Senior year at her small, Catholic high school, Mom decided on secretarial school, part of her plan to escape to somewhere — anywhere — else. One day Sister Superior called my mom to the school office and showed her how 12 years of straight A's had earned her the rank of valedictorian. Then she showed her that the next-highest grades belonged to a boy, who would be going to a "real college." The nun moved him up to the first spot, and my mom down to salutatorian. Mother remembers clearly that she and her parents accepted this without question.

My mother did become a secretary. Years later, we would make her get out a stenographer's pad and marvel at how fast she could still write down whatever we said in that funny-looking hieroglyphic called "shorthand." When I got married, she passed on the pretty pearl bracelet her boss had given her at her going away party, just after she'd announced that she was pregnant with me. Pregnant women, of course, were not to be seen in the workplace.

And that was it for the next two decades. She scrubbed the floors, ironed our sheets and underwear, and drove us to band practice, until divorce — another big '80s trend — forced her back into a job at the prevailing minimum wage of $3.35 an hour. (Another lesson to me that I'd better be darned sure I never depended financially on a man!)

We have obviously come a long, long way (baby), as The New York Times' Gail Collins reminds us in her engaging book When Everything Changed: The Amazing Journey of American Women from 1960 to the Present. And yet ... today when I watch that old commercial about balancing kids, work and husband with gusto, I am torn between laughter and a bitter sense of betrayal.

Is your company breaking new ground as a 21st century workplace? Do you still feel stuck in the '80s ... trying to live up to the promise of the Enjoli Woman? Please Share Your Story

"It backfired! No one can do all that," says Lynne Casper, a sociologist at the University of Southern California. Casper actually sings the Enjoli song to her classes — "I belt it out" — to convey the 1980s attitudes toward work and family. She says today's students may not grasp it at first, but it prompts them to talk to their mothers and grandmothers.

I guess you could call me the poster child progeny of the Enjoli commercial. Per its most famous stanza, not only do I bring home a good portion of my family's bacon, on most nights it's actually my husband — oh, yes! — who "fries it up in a pan." (As for the third part of the jingle, can we please dispense with the ridiculous notion of morphing into sexy-slinky on a work night?)

But it's also true — and I cannot be alone in this — that I had no clue how insane this juggle of full-time work, parent-teacher meetings, sick days and school plays would be. My mom certainly couldn't have warned me. She still marvels that I get both myself and the kids out the door to school all dressed, since she had the luxury of sending us to the bus in her bathrobe. Most of my friends, like me, were busy building careers before launching a family. It seems so many of us have learned the hard way that — as one of my colleagues puts it when she speaks to young women — "You can have it all, just not at the same time."

If you want to pick up where Collins leaves off, journalist Sharon Lerner has written a stinging account of how public policy and private businesses have failed to adapt to working mothers. The War on Moms: On Life in a Family Unfriendly Nation comes out in May. Read it and weep at European family-friendly policies, like Sweden's guarantee that parents can work reduced hours until their child is 8. Or read it and be grateful, perhaps, that you have it a lot easier than many others.

Since this elusive quest for the perfect work-family balance seems to come up at every dinner party or play date, I imagine I'll be looking at the issue more for NPR. So I'd love to hear about your situation. Is your company breaking new ground as a 21st century workplace? Or do you still feel stuck in the '80s ... trying to live up to the promise of the Enjoli Woman?