Accessibility links
Despite Sex And Abuse Scandals, Catholic Church Still Central To Irish Life The child and sex abuse scandals that rocked the Catholic Church in Ireland harmed the church's standing in the eyes of many Irish. But the church is so deeply woven into the fabric of Irish life, it is difficult for many people to distance themselves from it. 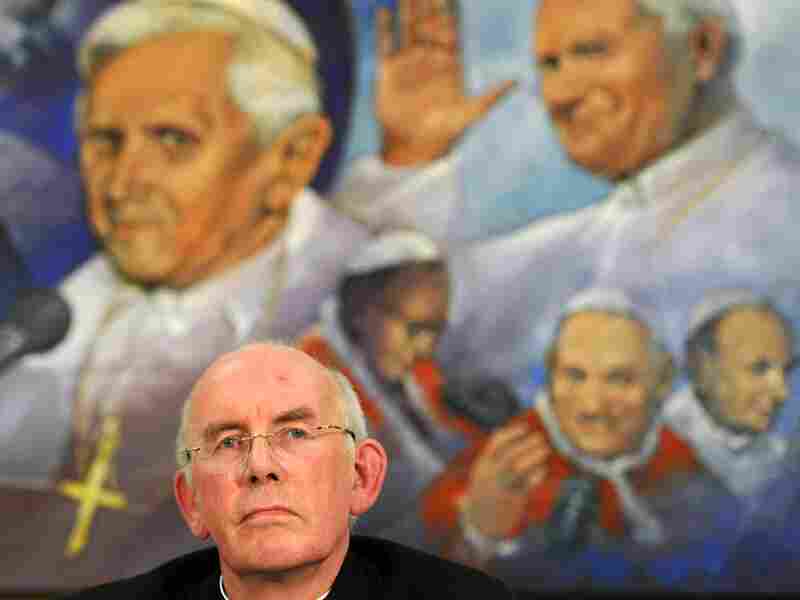 Cardinal Sean Brady, the head of the Catholic church in Ireland, said Monday he would not resign despite admitting he helped the church collect evidence against a child-molesting priest — and never told police about the crimes. Brady is seen here at a press conference following meetings with Ireland's bishops and Pope Benedict XVI last month at the Vatican. Christophe Simon/AFP/Getty Images hide caption 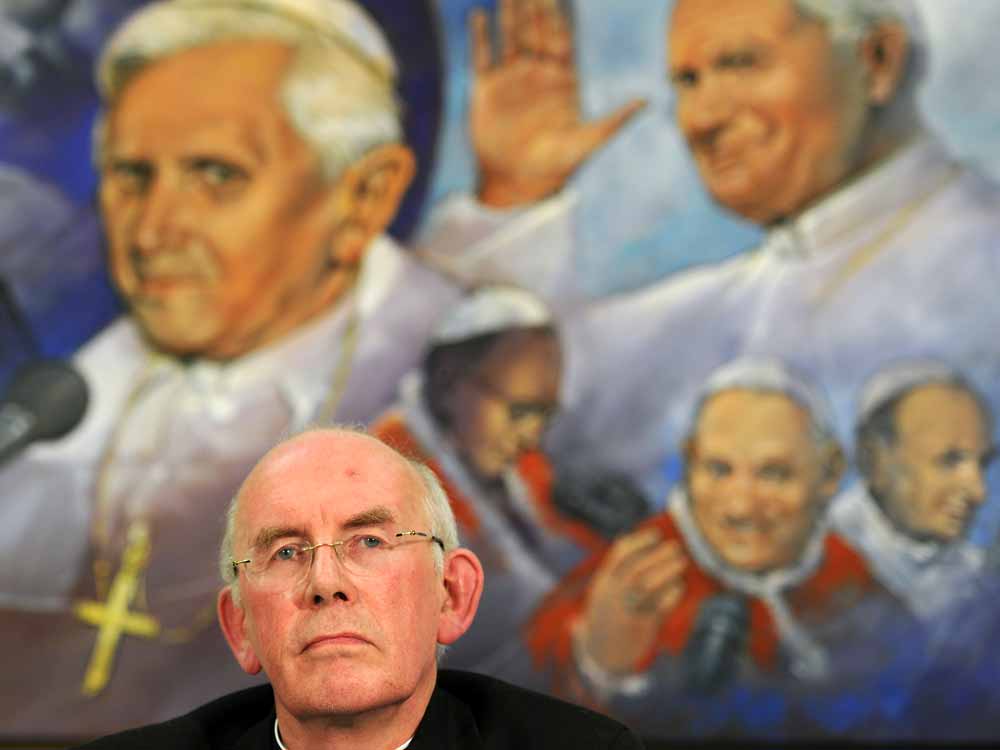 Cardinal Sean Brady, the head of the Catholic church in Ireland, said Monday he would not resign despite admitting he helped the church collect evidence against a child-molesting priest — and never told police about the crimes. Brady is seen here at a press conference following meetings with Ireland's bishops and Pope Benedict XVI last month at the Vatican.

For 33-year-old Paul Dunbar, the child abuse scandals in Ireland's Roman Catholic Church were the final straw. Like many of his contemporaries, Dunbar was baptized as a child, but had slowly drifted away from the Catholic faith until he found himself a complete atheist by his late 20s.

Then came the publication last year of two government reports that detailed the systematic abuse of Irish children by monks, priests and nuns, and the cover-up by the church hierarchy.

Dunbar was moved to formally quit the church, a lengthy process known as "defection." And, says the graduate student from Cork, "it's not as easy as you might think."

So in order to help others who want to defect, Dunbar set up a Web site, Count Me Out, which outlines the steps needed to officially part from the church.

A poll commissioned earlier this year by the Irish Times found that 74 percent of people polled said the church had not responded adequately to the scandals revealed in last year's reports.

But the church is so deeply woven into the fabric of Irish life, it is difficult for many ordinary Irish people to distance themselves from it. The church is involved in education and health care, and its imprint on the Irish national identity is deep.

On census form, lots of people fill out Catholic as though it's an ethnic group, not a religious belief. It's almost like a blood type. We are trying to change that.

Paul Dunbar, founder of a Web site to assist people who want to "defect" from the church

Eoin Smith, 33, an accountant, stopped practicing as a Catholic when he left high school. He is now a self-proclaimed atheist.

Like Dunbar, he feels strongly about the abuse within the church, and wanted to leave it. But his wife suggested that he not be too hasty. Their two-year-old son Oisin will in a few years reach school age.

Ninety-two percent of primary schools are still run by the Catholic Church and most of the best schools are Catholic.

"With a Catholic school they can turn you down if you're not Catholic, so my wife said let's keep up the pretense for a little longer," Smith says. "And then maybe we can slink into the school we want. And then we can think about officially leaving the church."

Smith says he and his wife are considering baptism for their son before he turns four to more easily obtain a place in school. Smith says he is not particularly proud that he has put off his defection, but he calls it a classic Irish compromise — "a little bit hypocritical to get the best result I want."

"Everyone is making the same kind of compromises, simply because that is the way Irish society is structured," Smith says.

A report last May ordered by the Irish government revealed that the Catholic church covered up almost four decades of sexual and physical abuse by priests and nuns against thousands of children in state care. Another report revealed that pedophile priests had engaged in sex abuse between 1975 and 2004 and several bishops had mismanaged victims' complaints.

The recent Irish Times poll showed that 61 percent of respondents said the church should give up its control of the school system.

But if public sentiment against the church is growing, Dunbar says apathy prevents disaffected Catholics from officially leaving the church. Their continuing presence on the rolls inflates the church's membership. In helping others to defect, Dunbar says he hopes that will diminish the church's influence on the state.

It's a very difficult time to be a committed Roman Catholic in Ireland.

"On census forms, lots of people fill out 'Catholic' as though it's an ethnic group, not a religious belief. It's almost like a blood type," he says. "We are trying to change that. We are trying to say you can still be spiritual, hold Christian values, but unless you formally defect, you are still officially part of the church."

As for the faithful within the Catholic church, it has been a hard year.

"It's a very difficult time to be a committed Roman Catholic in Ireland," says Breda O'Brien, who teaches religious education at a Roman Catholic school in central Dublin, and also writes a column for The Irish Times on religion.

"There has been scandal after scandal, compounded by mismanagement within the church," O'Brien says. "The church has not covered itself in glory."

But O'Brien insists that people should not disregard the spiritual aspects of the church because of the misdeeds of its clerics.

"No one can deny the problems the church has had, but that does not make everything the church does wrong," she says.

She recalls how one critic recently called her an apologist for child abuse when she tried to point to the good work the church still does in society.

O'Brien supports more separation between the church and Irish society. There are more secular schools being set up, and the church has said it is committed to withdrawing slowly from the education system if that is what people want.

She says the transition period will be difficult as Irish society tries to work out the new balance between the religious and the secular. And she fears in many ways that consumerism and materialism has replaced Catholicism as the credo of the new Irish society.

O'Brien says the days are long gone of children accepting something because a teacher says it is so.