Accessibility links
WWII Combat Cameraman: 'The Public Had To Know' During Word War II, Norman Hatch was a combat cameraman who witnessed — and filmed — some of the most bitter fighting in the Pacific theater. His efforts ended with, of all things, an Academy Award — for footage so brutal that it took special permission from President Franklin Roosevelt to allow the film to be shown as a newsreel. 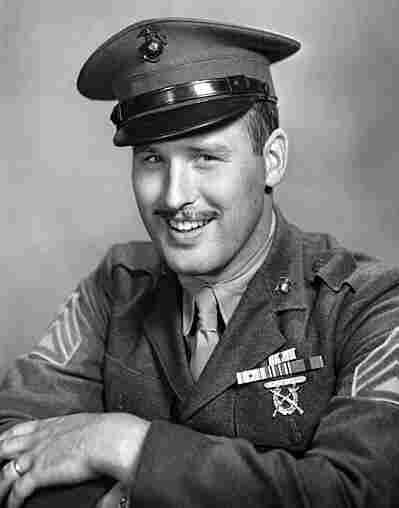 Staff Sgt. Norman T. Hatch was a cinematographer and combat photographer during World War II. He won an Academy Award for his footage of the amphibious assault at the Battle of Tarawa in 1943. U.S. Marine Corps Combat Correspondents Association hide caption 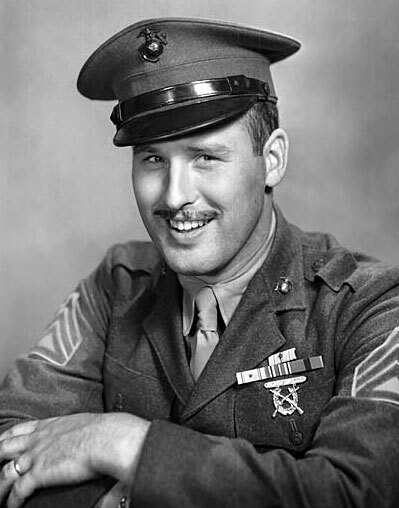 Staff Sgt. Norman T. Hatch was a cinematographer and combat photographer during World War II. He won an Academy Award for his footage of the amphibious assault at the Battle of Tarawa in 1943.

During Word War II, Norman Hatch was a combat cameraman who witnessed — and filmed — some of the most bitter fighting in the Pacific theater. His efforts ended with, of all things, an Academy Award — for footage so brutal that it took special permission from President Franklin Roosevelt to allow his short documentary to be shown as a newsreel.

A new 10-part miniseries on HBO called The Pacific has revived interest in the United States' island-by-island campaign against the Japanese in the 1940s. Six decades after those battles, Hatch, sitting in the basement den of his Alexandria, Va., home — filled with film canisters and movie posters — still remembers it clearly.

'You Get Over This Wall And You Fight'

Hatch says he caught the photography bug early in his native Gloucester, Mass. He and his friends would grab their cameras and head to Boston's Howard Theater, an old burlesque house, where they would secretly snap pictures of the dancers on stage.

When he joined the Marine Corps just as World War II began, Hatch was eager to put his photography skills to work. By November 1943, Hatch was a staff sergeant in the Pacific — capturing footage on a hand-cranked 16mm movie camera.

Watch the Academy Award-winning documentary, 'With the Marines on Tarawa':

On the eve of the Battle of Tarawa, Hatch was in a small boat, bobbing in the waves toward the tiny Pacific Ocean atoll. The small island — with its airfield — was held by the Japanese, and it had to be captured before the Marines could move on toward Japan.

The water was shallow, so the Marines had to wade in — starting at chest level — some 800 yards.

"Everybody in the boat went down to sort of a dog paddle," Hatch recalls, "All you could see was helmets going in. It looked like a herd of turtles going back to the shore."

On the beach — for those who'd made it ashore alive — it was chaos. Some Marines had lost their rifles. Hatch remembers seeing Marines cowering under a pier — and an officer, who was smoking a cigar, screamed at them to get off the beach and into the fight: "He'd walk up in front of them and he'd tell them, 'Now goddamn it, you get over this wall and you fight. That's what you do. That's why you're here.' "

'I Had The Machine Gunner Right In Front Of Me'

What Hatch and the other cameramen did six decades ago was unique: They captured on film an entire battle from start to finish.

"Guys are just on the beach, wondering what to do next," Hatch says, watching the flickering black and white footage. "There's heavy fire coming over the top of the sea wall."

The Marines crept from bunker to bunker — under fire the whole time. They used flame throwers and grenades to force the Japanese out and into the open.

"I was standing there," Hatch recalls, "photographing the Marines going to the top of that big sand blockhouse. Somebody said, 'Here come the Japs!' Two squads of Japanese came out — about 12 men. They were mowed down. I had the machine gunner right in front of me. It was the only time that the enemy and our forces were in the same frame."

Hatch was filming all this under extraordinary conditions. He carried a pistol — he fired it just once. He would crouch in a bomb crater and turn his camera toward the action. It was a very dangerous situation, he says.

Hatch never suffered a scratch, even though he went on to land at Iwo Jima later in the war. What Hatch remembers most of Tarawa was the overwhelming stench of the dead, and the thick black smoke. Hatch had to change his shutter speed to adapt to the smoke — there were no automatic settings back then.

Hatch's footage shows Marines lying dead on a beach — "Just as they lay," he says. "This was the first time this type of death was shown. Floating in the water ... and this was just before Thanksgiving Day, which made it even worse."

'The Public Had To Know'

More than 1,000 Marines died at Tarawa — that's more American dead in 76 hours than in almost nine years of fighting in Afghanistan. The film of American casualties at Tarawa was too gruesome for some military officials. The question of whether to show the footage to the American people went all the way to the White House.

President Franklin Roosevelt agreed to the film's release — after being persuaded by his friend, journalist Robert Sherrod.

"Sherrod said, 'You've got to let the public know what's going on, or you won't have any support.' And Roosevelt said OK," Hatch says.

With the Marines at Tarawa was shown in theaters in 1944 — months after the battle. The film went on to win an Academy Award for Best Short Documentary.

Now, the three-day battle at Tarawa has largely been forgotten — edged aside in public memory by the American flag rising at Iwo Jima. But all these years later, Hatch still remembers the other Marines shaking their heads as he filmed, asking why he was carrying a camera, but no rifle.

"I was told by guys on the front line that I didn't have to be there, and I would quietly tell them that I did," Hatch says. "The public had to know what we were doing, and this was the only way they would find out."