Accessibility links
Coffee Party Founder Wants Common Grounds In just a few weeks, fans of the Coffee Party on Facebook mushroomed from a few hundred to more than 100,000 — making documentary filmmaker Annabel Park the accidental leader of a political movement. Coffee Parties are meeting all across the country Saturday. What exactly are they going to do?

Several weeks ago, documentary filmmaker Annabel Park was sitting in her apartment in Silver Spring, Md., when she updated her Facebook page with a good, old-fashioned rant. "Let's start a coffee party — a Red Bull party — anything but tea," she wrote. "Let's get together and drink cappuccino and have real political dialogue with substance and compassion." 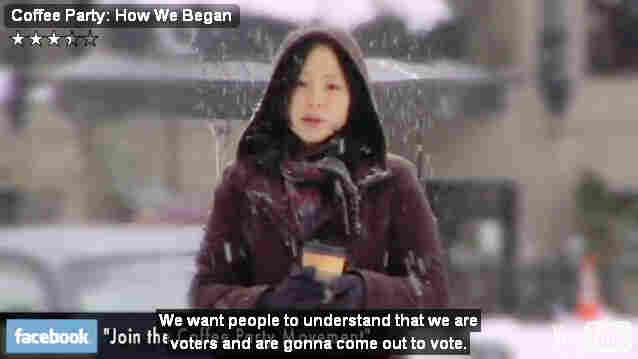 In a video about the Coffee Party's origins, founder Annabel Park says she was frustrated with news coverage that made it seem like the Tea Party was representative of America. hide caption

In just a few weeks, fans of the Coffee Party on Facebook mushroomed from a few hundred to more than 100,000 — making Park the accidental leader of a political movement.

"I've kind of had to put a lot of things on hold to focus on this," Park tells NPR's Jacki Lyden. "It's definitely been a surprise in my life."

On Saturday, newly formed Coffee Party chapters are meeting all across the country — and what are they going to do, exactly?

"This is the National Coffee Day," Park says. "People are coming together as a community to engage in a conversation about what concerns them."

She says the Coffee Party is a way for people to practice democracy. "During campaigns, there are clear ways to participate. But when you're not in the middle of a campaign, it's very hard to figure out how to engage in a political process in an ongoing way, that's effective and constructive. So we're trying to create opportunities for that kind of effective, ongoing engagement."

Despite the reactionist origins of her group, Park says the Coffee Party doesn't want to be seen as the anti-Tea Party. Like the grass-roots conservative movement, Park says, people drawn to the Coffee Party feel the federal government doesn't represent them, either. The two groups might even have a lot to talk about.

"I think it's important for us to actually meet with people who identify themselves as Tea Party members and sit down and have coffee or tea with them," she says.

"In fact, after they dumped tea into the harbor, the Continental Congress declared coffee the national drink," Park adds. "That became the solution to the problem."