Accessibility links
Tracking Down Relatives, Visiting Graves Virtually Anne Cady spends her Saturdays at Arlington National Cemetery hunting for tombstones of people she never met. The photos she and other volunteers post online let people anywhere in the world glimpse a loved one's resting place. Cady recently ended one woman's search for a cousin who died before she was born. 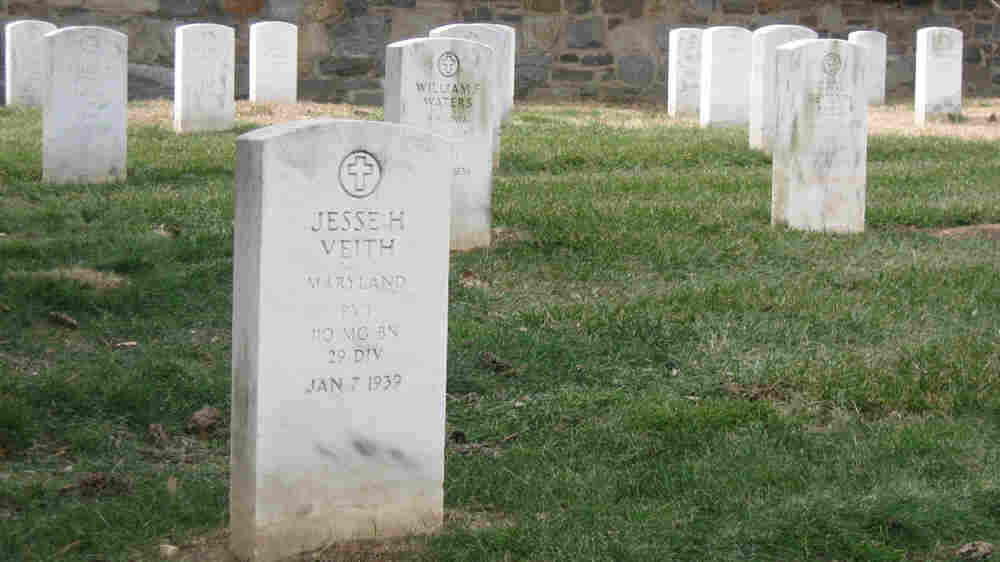 Anne Cady spends her Saturdays at Arlington National Cemetery in Virginia, searching for tombstones of people she never met. She admits that most people don't understand her hobby.

"Some people think it is kind of ghoulish," she says. "Others totally understand that it is just very peaceful. I've always enjoyed being out in cemeteries and mixing that with my love of puzzles. You know, there couldn't be anything better."

Cady is one of thousands of people who volunteer to take photos of tombstones for the Web site FindAGrave.com. The site links up people from across the United States — all over the world even — who want a photo of a tombstone but don't have the cash to get there and take the photo themselves.

Camera slung around her neck, Cady laces up her shoes and heads to the cemetery. Among the graves she's hunting for today is that of Jesse Veith, a World War I veteran who fought in France in 1918.

She walks for almost an hour, stopping occasionally to glance at her notes. She knows she's getting close. She repeats the number "1556" out loud, like a mantra, as she combs through one section of the graveyard. Then she shouts.

"We have Jesse Veitch!"

But there's a problem. The tombstone reads V-E-I-T-H, not V-E-I-T-C-H. Cady isn't surprised. "These stones are not always perfectly right — they did a less-than-pristine job of getting names right."

Still, she takes a few photos and continues trudging through the cemetery.

Jim Tipton started FindAGrave.com about 15 years ago as a place to post photos of tombstones for famous people like Al Capone and Karl Marx. Then people started putting up pictures of tombstones with only marginally famous names on them.

"At some point, I said, 'I am sick of drawing the lines of who is famous and who isn't. I'm just going to accept everyone,' " Tipton says. The floodgates opened. Since then, Find A Grave volunteers have taken over a half-million photos of tombstones.

"We're now adding names at 40,000 a day or something like that, which is higher than the death rate in the U.S.," Tipton says. "So we are kind of gaining ground on U.S. burials."

Cady's search for Veitch's tombstone was requested by his cousin, Teddi Smith. Smith, 63, started tracking her family history almost a decade ago.

"I would love to be able to sit down with my mother at this point and ask her a zillion questions, but those are questions that I'll never get answered," Smith says.

Her parents died when she was 20, so Smith has had to learn about a lot of her family through historical documents and Web sites like Find A Grave. She lives in Florida, and although she never met Veitch, she says getting to know family members like him — whether dead or alive — makes her feel more whole, more connected.

"There's actually an emotional attachment that you get when you actually see the picture of the grave marker," Smith says. "You can put that in your family tree, and they are no longer just a name and some dates."

"Oh my goodness," she breathes. "Oh my goodness. That is just beautiful. I have goosebumps everywhere. Yeah, it's misspelled, but yeah, that's him."

Now that she has seen the grave, Smith can call Arlington National Cemetery and get a new headstone — with the right spelling. And once the new one is up, she says, she's going to want another photo.