Accessibility links
Turf Fight Is New Front In Mexico's Drug War Violence has exploded in Mexico's northeastern border cities, just across the Rio Grande from South Texas, as two drug mafias engage in a vicious new fight for turf. Gunfights have killed dozens of people, and communities up and down the river fear it's just the beginning. 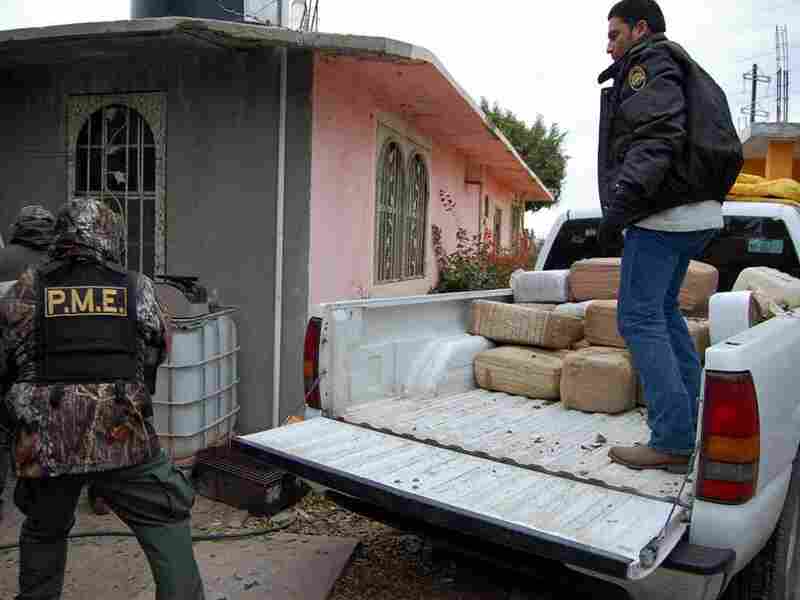 Police unload packages of marijuana confiscated in January in Nuevo Laredo, Mexico. The U.S. Drug Enforcement Administration estimates half of all Mexican marijuana is smuggled into the U.S. through South Texas. Two drug cartels are now fighting for control of the area. Raul Llamas/AFP/Getty Images hide caption 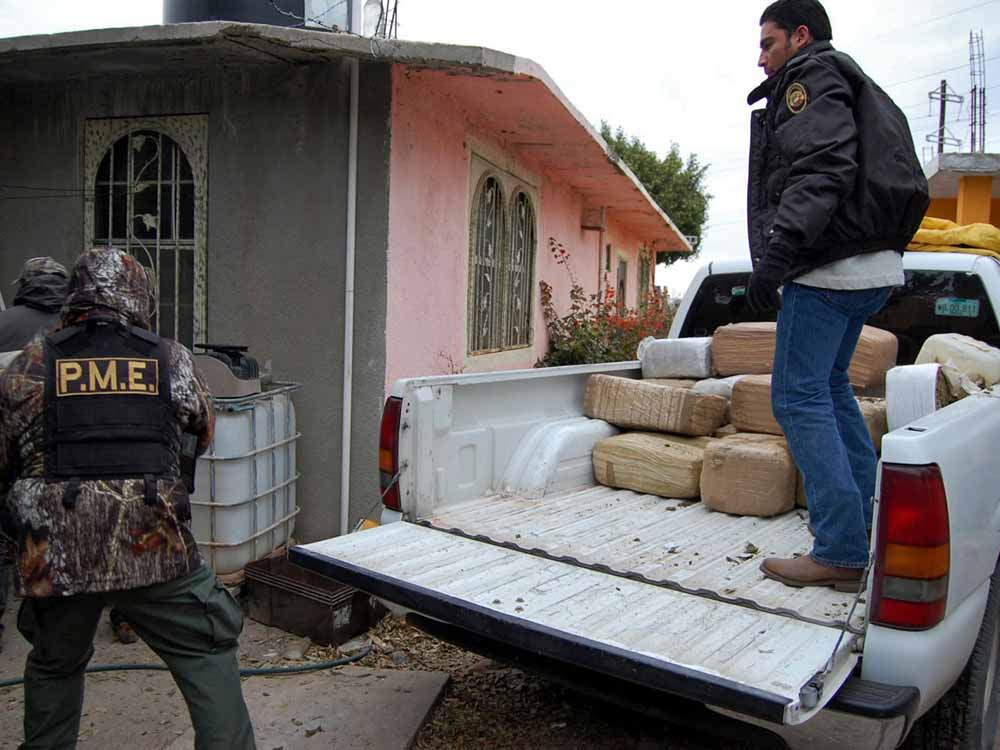 Police unload packages of marijuana confiscated in January in Nuevo Laredo, Mexico. The U.S. Drug Enforcement Administration estimates half of all Mexican marijuana is smuggled into the U.S. through South Texas. Two drug cartels are now fighting for control of the area.

Violence has exploded in Mexico's northeastern border cities, just across the Rio Grande from South Texas, as two drug mafias engage in a vicious new fight for turf.

It is a front in the drug war apart from the violence that has plagued Ciudad Juarez, hundreds of miles upstream on the Rio Grande, where a pregnant American woman who worked for the U.S. consulate was killed last weekend.

But as in Juarez, gunfights in this part of Mexico have killed dozens of people, and communities up and down the river fear the violence in this new front in the bloody drug cartel war is just beginning.

In the past decade, Mexico's organized crime groups have been muscling into each other's territory to take over routes and steal market share.

The root of the increase in violence is that two ruthless mafias — the Gulf Cartel and its former enforcers, Los Zetas — have split. For more than two weeks, they have been engaged in a widening gangland war to determine who will control access to balmy South Texas, where the U.S. Drug Enforcement Administration estimates half of all Mexican marijuana is smuggled into the U.S.

Zoran Yankovich, special agent in charge of the Houston DEA office, says if the two-year-old turf battle raging in Juarez is a guide, the violence in Tamaulipas has only begun.

"They're positioning themselves. I think they're still preparing ... still arming themselves, bringing additional reinforcements, and I think eventually it will probably be even bloodier than what we're seeing now," Yankovich says.

The DEA says most of the major Mexican drug mafias have allied with one side or the other in the new Tamaulipas conflict.

Mexican media have reported that the war erupted over vengeance after a Gulf Cartel member killed a top member of Los Zetas. Yankovich says the conflict may be a result of opportunism: Who will replace the former Gulf Cartel chief Osiel Cardenas, recently sentenced in the U.S. to 25 years in federal prison?

"Anytime a major player goes down — whether they get arrested or in this case sentenced — there is this reorganization [that is going to take place]," Yankovich says.

'No One Is Protected Here'

The territorial struggle has engulfed a large region of northeastern Mexico in violence, from Nuevo Laredo downriver to Matamoros at the mouth of the Rio Grande.

Early the morning of Feb. 27, there was a fearsome, three-hour shootout on Federal Highway 2 in the town of Camargo, across the river from Rio Grande City, Texas. No deaths or injuries were reported, but Mexican drug mafias frequently carry away their own casualties.

Because of a media blackout, much of what is known about a Feb. 27 shootout in the town of Carmargo comes from a video shot by an anonymous local woman and posted on YouTube. Professional journalists have been kidnapped, beaten and, in at least once instance, killed, presumably by drug cartel members.

"Basically, we are taking extra precautions because of the recent disturbances," says the Rev. Lorenza Garcia, the priest at Santa Ana, picking his words with excruciating care.

People are still afraid, despite street patrols by federal police and soldiers.

"No one is protected here. Everyone has to look out for themselves," says a woman selling tacos of sliced cactus called nopalitos. "And the mayor, he's hiding in his mother's skirt," she adds derisively.

No one really knows what's happening because there's a media blackout: Journalists are terrified. In the past two weeks, a Mexican TV reporter and cameraman were kidnapped, beaten and released — presumably by narco-traffickers — and a Reynosa reporter died, local sources say, from a vicious beating.

Much of what people know about the Camargo shootout they learned from a video shot by an anonymous local woman and posted on YouTube.

While she narrates, the camera pans a half-dozen late-model SUVs and tricked-out pickups riddled with bullet holes, sitting disabled beside the road. The video, titled "Gunfight in Camargo," has gone viral, says a local doctor who asked not to be identified.

"The governor said this was an isolated case and we shouldn't be afraid," he says. "We don't know who this woman is, but she's brave. She showed the truth. Now the government can't deny it."

The U.S. State Department has urged Americans to avoid driving on major highways south of the border in northeastern Mexico. And the Texas Department of Public Safety has warned students going to South Padre Island for spring break not to party in Mexico this year.