Accessibility links
Taking Surprising Risks For The Ideal Body In Jamaica, like all over the world, there are deep conversations about the ideal body type. While there are competing norms of beauty, some women are using extreme methods to fit their vision of beautiful, like ingesting chicken pills for broader hips and butts, and bleaching their skin to be whiter. And they're taking health risks to do so.

First of a yearlong series 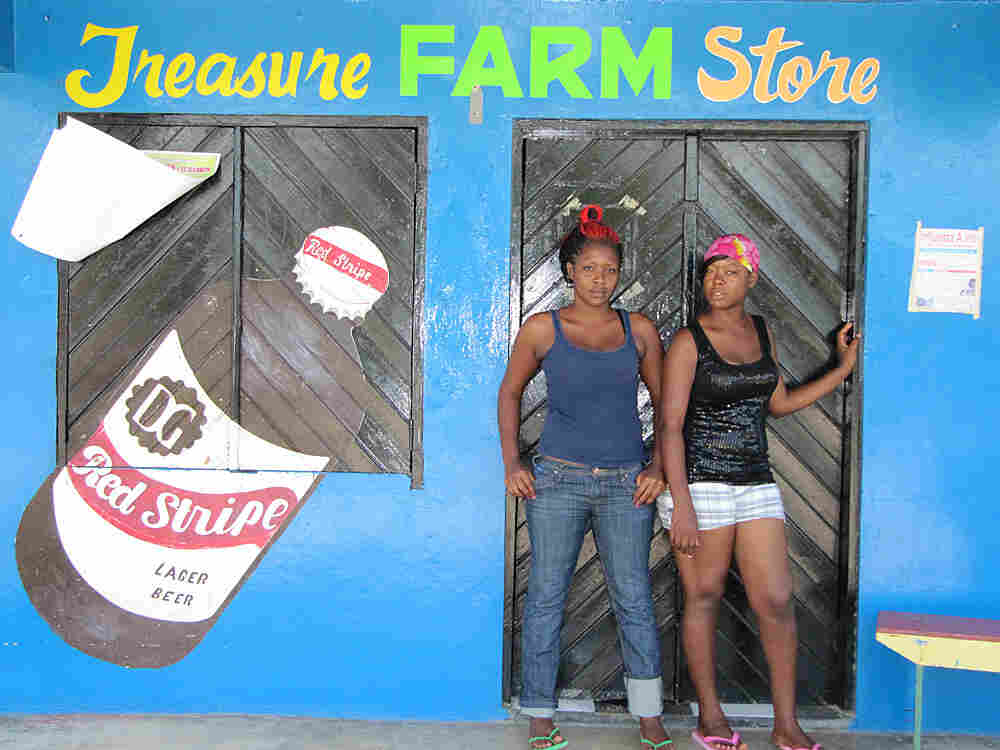 The Jamaican vision of beauty keeps evolving. "Most of the young girls now coming up — they don't want fat no more, they want slim and trim," says farmer Kadesha Abrahms (left) at a feed store in Treasure Beach, Jamaica. Davia Nelson for NPR hide caption 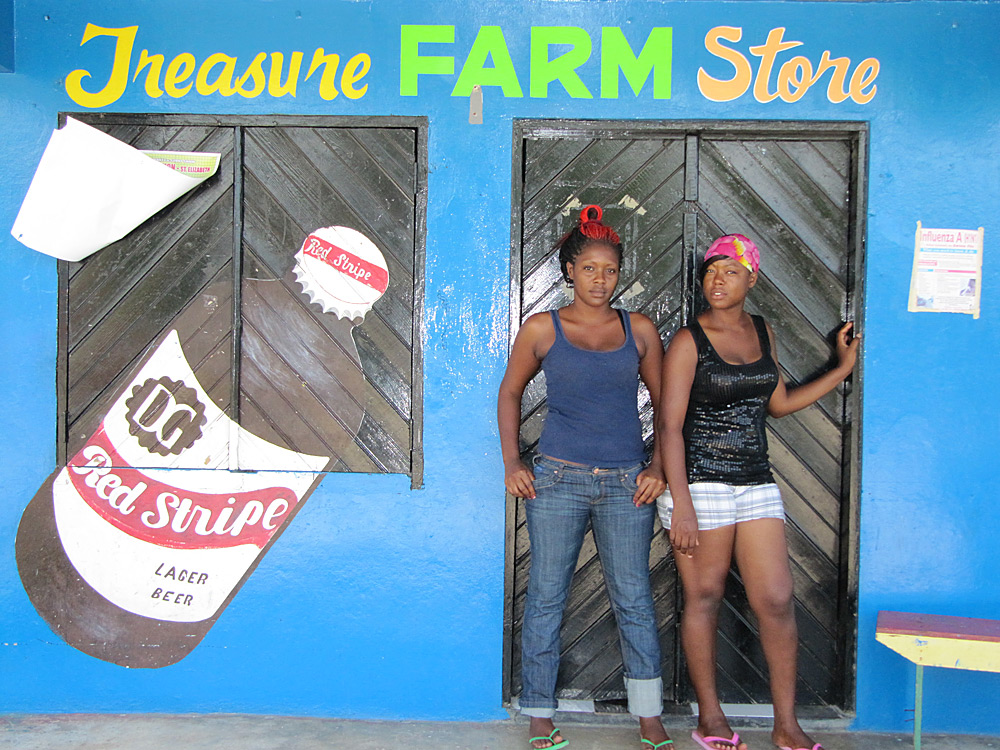 The Jamaican vision of beauty keeps evolving. "Most of the young girls now coming up — they don't want fat no more, they want slim and trim," says farmer Kadesha Abrahms (left) at a feed store in Treasure Beach, Jamaica.

Every culture has its idealized woman — a standard of beauty that is sought and valorized. And everywhere around the world, women are altering themselves to achieve the look that is celebrated, from cosmetics to liposuction.

In Jamaica, women have come up with some of their own unique, homegrown beauty enhancement techniques.

"Some girls, in order to be more attractive to the male, they get themselves into the use of chicken pills. Chicken pills are the same pills farmers give to make the chickens grow faster," says Carol Turpin of St. Catherine, Jamaica, who is the head of the 4-H Club.

This year, NPR and The Kitchen Sisters will bring you stories of girls and the women they become. You can follow them on Twitter by going to @kitchensisters. You can send suggestions to our listener comment line at 202-408-9576.

Click here for instructions — we want to hear from you.

The trend began in the '90s — and took people by surprise.

"Women take the chicken pills to get broader hips and bigger bottoms," says Carol's son Jason. "In our Jamaican culture, we love a girl that has a lot of shape."

"Most males, they love to see women with big bottoms. The whole idea of Coca-Cola bottle shape" Carol says. " 'I don't want a meager woman,' that's how the men would speak. ... They're figuring if you look meager, you look poor, in the sense that you're not being taken care of."

According to Carolyn Cooper, professor of literary and cultural studies at the University of the West Indies, "big bottoms" reveal power — but there are competing norms of beauty in Jamaica.

"There's a kind of anorexic, Eurocentric model of beauty," she says. "Also, a much more Afrocentric body type that is valorized."

Under the African standard of beauty, health is expressed in some amount of fat. The "healthy body girl" is at least between 160 and 210 pounds, says Sonjah Stanley-Niaah, lecturer in cultural studies at the University of the West Indies.

"If you have no meat on your bones, the society can't see your wealth, your progress, your being," she says.

In Jamaica, there is a high level of activity around modifying the body — and there are deep conversations in the culture that manifest in the music and the dance hall about the ideal body type.

"What I find amazing is the degree to which women will put themselves at risk to fit an image they consider ideal," Cooper says.

Taking Health Risks To Be Beautiful

Dr. Neil Persadsingh, a dermatologist in Kingston, has seen hundreds of young women who have taken chicken pills and have suffered the side effects.

What I find amazing is the degree to which women will put themselves at risk to fit an image they consider ideal.

Carolyn Cooper, professor of literary and cultural studies at the University of the West Indies.

He says it's the arsenic in the chicken pills that stimulates the appetite of the chicken. The government has banned the chicken pill for chickens and women, but it is still available across the island in farm stores and on the street.

Some of the side effects include numbness, diarrhea and dermatitis. And arsenic is a cumulative poison that can build up in the body and cause cancer. But the trend may be moving away from the chicken pills.

At a feed store in Treasure Beach, Jamaica, young farmer Kadesha Abrahms who works at the store says, "Most of the young girls now coming up — they don't want fat no more, they want slim and trim," Abrahms says. "The overseas culture is coming in. Everybody's adapting to it, trying be slim. Seeing girls on TV, on runway shows, on MTV, the girls all slim. They don't want big body like me anymore."

Donna Hope, a lecturer in reggae studies at the University of the West Indies says that, like women in all cultures, Jamaican women are using all kinds of artifice, hair extensions, eyelash extensions and skin bleaching as a form of enhancement. It's fashionable even though it's damaging to the epidermis.

Like chicken pills, the bleaching products are sold on Princess Street, Kingston's downtown market. They're packaged in little plastic bags with no labels.

Hope says that these cosmetic concoctions are a mix of toothpaste and curry powder that is rubbed on the skin and left for a period of time to lighten the skin.

"You have to keep yourself out of the sun, so they cover their skin," she says. "The skin starts to take on a reddish appearance, which means your epidermis is being burned."

This conversation about beauty is heard in the soundtrack of Jamaica, from Captain Barkey's song "Bleach on, Girl" to Mr. Lex's "Let Those Monkeys Out," where he likens bleachers to monkeys and vampires who have to stay out of the sun. And Queen Ifrica, a Rastafari artist, sings that bleaching is a negation of your African self in "Mi Nah Rub." 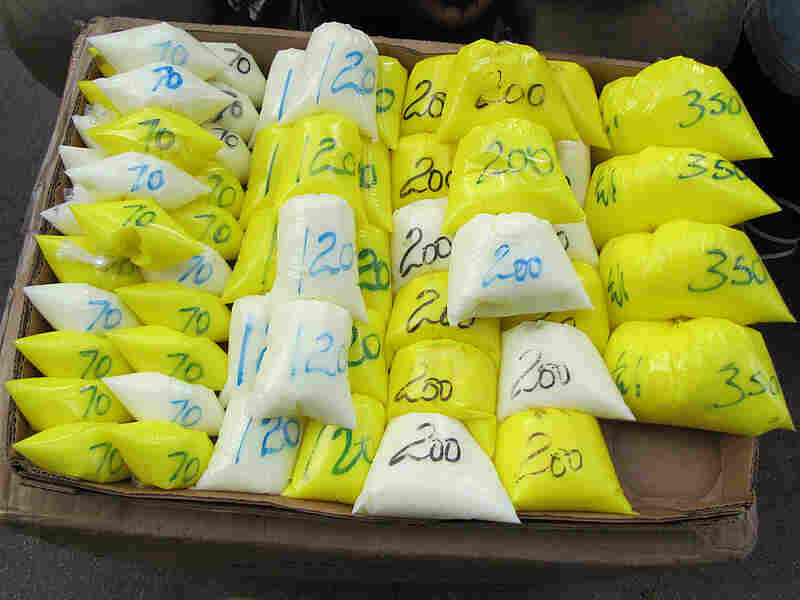 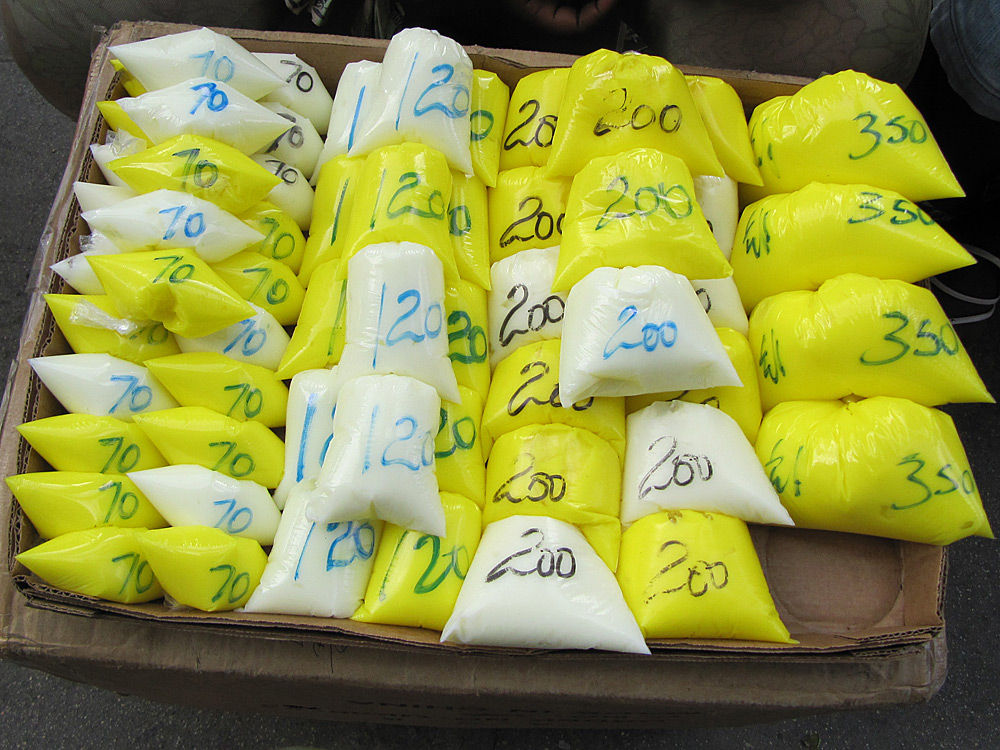 On the streets of Kingston, Jamaica, women buy bleaching products sold in plastic bags without labels.

Cooper says the politics of the body in Jamaica is complicated, because Jamaican society emerged out of the trauma of slavery. Color is an important marker of social status.

"We still have a racist legacy in which the perception is reinforced that the lighter your skin is, the more beautiful you are, the further you can go in the culture, the more socially accepted you are," she says. "Still, in Jamaica, a lot of positions of power are occupied by people who are light-skinned. And the attitude is, if light skin is in, I can get it, too."

Three years ago, Zahra Redwood, a Rastafarian woman with organic dreadlocks and a broad nose and full lips, won Miss Universe. Fifty years ago, that kind of image would never be paraded on a stage as beautiful, says Cooper.

"We have to see that we have come a long way in terms of society's readiness to accept multiple models of beauty," she says.

There are risks involved in taking chicken pills, using bleaching products, doing surgical implants, having plastic surgery. Women do these modifications thinking they will have greater purchase.

This preoccupation with transforming the body is something that transcends cultures. Whether it's under the surgeon's knife or freelancing with a chicken pill. It's a whole discourse of dissatisfaction and anxiety about accepting the body as naturally beautiful.

"At the end of the day," says Stanley-Niaah, "women do these beauty practices not to diminish themselves, but to somehow assert themselves."