Accessibility links
In Iraq's Restive Anbar, Many Sunnis Now Resigned In Iraq, the minority Sunnis have boycotted previous elections — many of them under threat from insurgents. But now that Sunnis have cast their votes in this month's parliamentary elections, how will they react if their side loses? Many in Fallujah seem resigned to accept what they get. 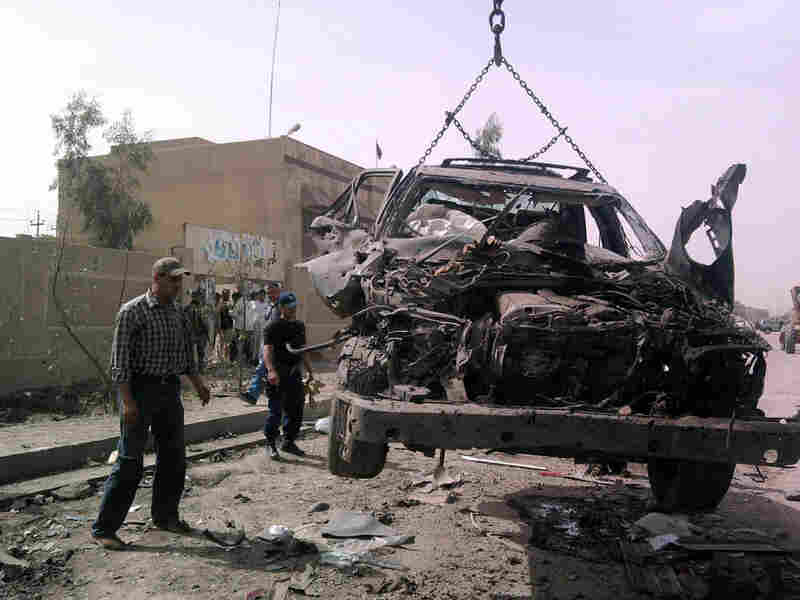 A vehicle is removed from the scene of a double-blast suicide bomb that targeted a military checkpoint in the former Sunni rebel bastion of Fallujah on Monday. AFP/Getty Images hide caption 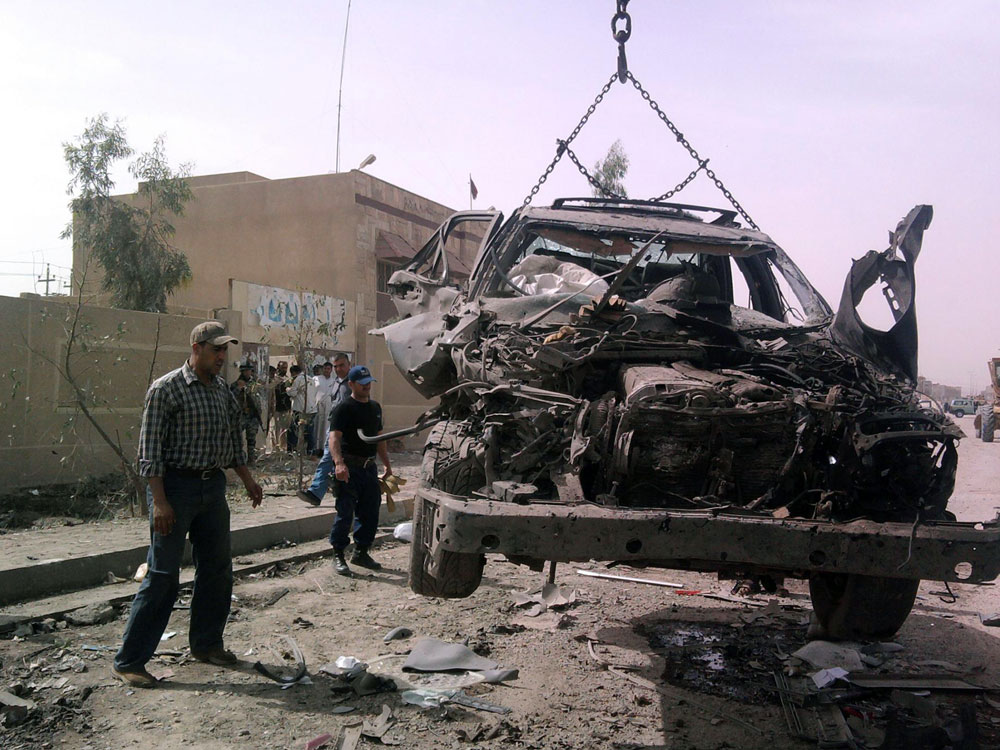 A vehicle is removed from the scene of a double-blast suicide bomb that targeted a military checkpoint in the former Sunni rebel bastion of Fallujah on Monday.

A car bomb struck Fallujah on Monday beneath a new highway overpass under construction in the Iraqi city.

That's the unfortunate mixed message of Sunni-dominated Anbar province these days: Once the heart of the Sunni insurgency, it's finally safe enough to rebuild and improve people's lives, but there are still violent incidents several times a month.

It is sometimes hard to discern the exact motive, says Army Brig. Gen. Ken Tovo, who commands the U.S. troops who still remain in Anbar.

"One of the challenges out in Anbar is to identify when a violent event happens — is it of a political nature? Is it inter-tribal violence, score settling, if you will? Or is it truly terrorist activity?" he says.

But Tovo is quick to point out that with minimal U.S. assistance, Iraqi soldiers and policemen kept the March 7 national parliamentary elections safe. No one was killed across the province.

Iraqi officials have confirmed a good turnout for the elections across the country, with more than 60 percent of registered voters casting ballots. That's a telling statistic, especially in the Sunni-dominated provinces. The minority Sunnis have boycotted previous elections — many of them under threat from insurgents in a state of war with U.S. forces and the Iraqi government. 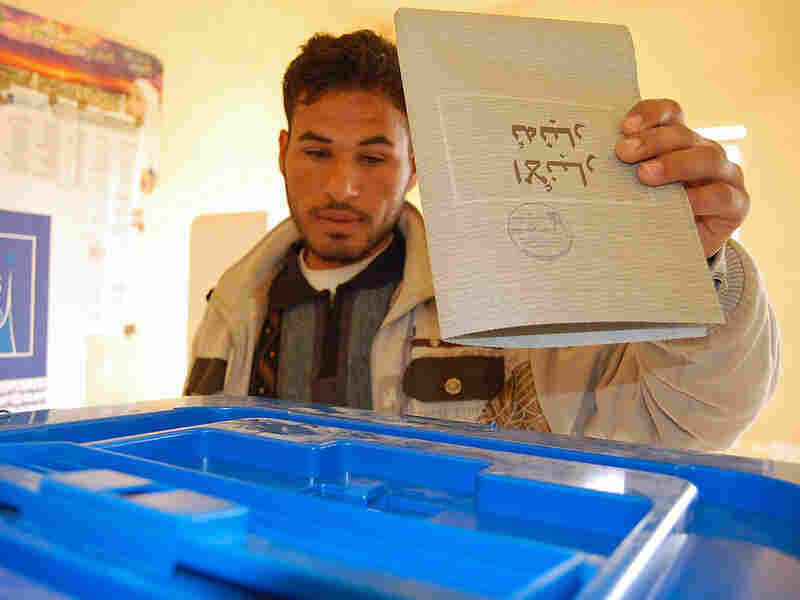 An Iraqi man casts his vote at a polling station in Fallujah in Anbar province on March 7. Azhar Shallal/AFP/Getty Images hide caption 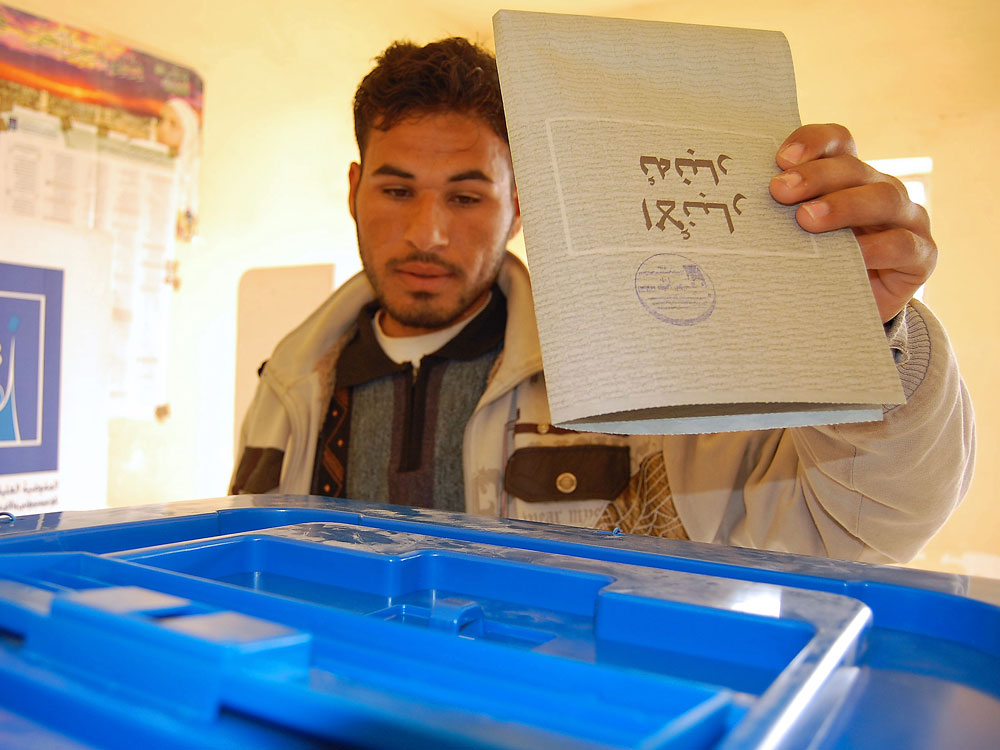 An Iraqi man casts his vote at a polling station in Fallujah in Anbar province on March 7.

But now that Sunnis have had a chance to cast their votes, how will they react if their side loses?

'Iraq Will Be Safe'

With the election returns still trickling in, Tovo is optimistic that Sunnis in Iraq want to solve their problems peacefully.

"Clearly we're worried about bad losers in the process. But that's just the nature of being a military man," Tovo says. "When parties didn't do well [in the provincial elections last year], most of them took the opportunity to reassess their strategy and figure out how to do better in the national elections."

Unofficial results indicate that Sunni provinces voted for a coalition led by former Prime Minister Ayad Allawi, a secular Shiite, and joined by many prominent Sunnis, including the former director of Fallujah's hospital.

After past boycotts, Sunnis are finally picking their leaders in Baghdad. But no one in Fallujah was celebrating that development.

"The Sunna in Iraq, I think they will stay weak for a couple of years," says Sheik Ifan al-Issawi, the leader of the tribal Awakening in Fallujah. A few years ago, he turned away from insurgency and joined U.S. troops to push al-Qaida out of Anbar.

His youngest daughter wriggles in his lap as he talks about the recent elections. Leftover campaign posters show the sheik in a white robe with a belt of ammunition across his shoulder.

Ifan acknowledges Sunnis are a minority, but says they will be included in the next government.

It's not idle chatter. Ifan has survived two assassination attempts in the past few months, and just last week his enemies killed three of his bodyguards, decapitating one of them. Still, he says, it's no comparison to a few years ago.

From Violence To Resignation

It was outside Haji Hussein, a kebab restaurant, in 2004 that the defiance in Fallujah turned to open warfare against the Americans and the Iraqi state. There, a mob killed four American contractors.

Later that year, U.S. forces took the city street by street. The restaurant was one of hundreds of buildings bombed to rubble in the assault. The owner, Muhammad Haji Hussein, lost two sons in the bombing, but he says that's in the past.

The days of violence are gone forever, he says. But Hussein adds that residents of Fallujah are not prepared to give up their rights, or let others steal their share of Iraq's wealth. There is some doubt in his voice, though, as if he might suspect that theft is already under way.

But business is brisk, with the famous lamb kebabs going onto the grill about three dozen at a time. A fan on the charcoal throws sparks like a forge, and most of the tables are full.

Suhaib Munaim, who owns a dairy in Fallujah, is having lunch. He says his business is doing well, but he's not optimistic about politics.

Munaim says he tried to vote on election day, but soldiers stopped him on the way to the polls. When he told them he was voting for a popular Sunni, they blocked his way. He believes that the Americans are trying to impose sitting Prime Minister Nouri al-Maliki, and the votes won't make any difference.

None of a dozen people interviewed in Fallujah said they would be willing to go back to violence, but most seemed resigned about the politics. One quoted an Iraqi proverb: "If you're hunting a rabbit, take a rabbit. If you want a gazelle, take a rabbit. It's all you're going to get."