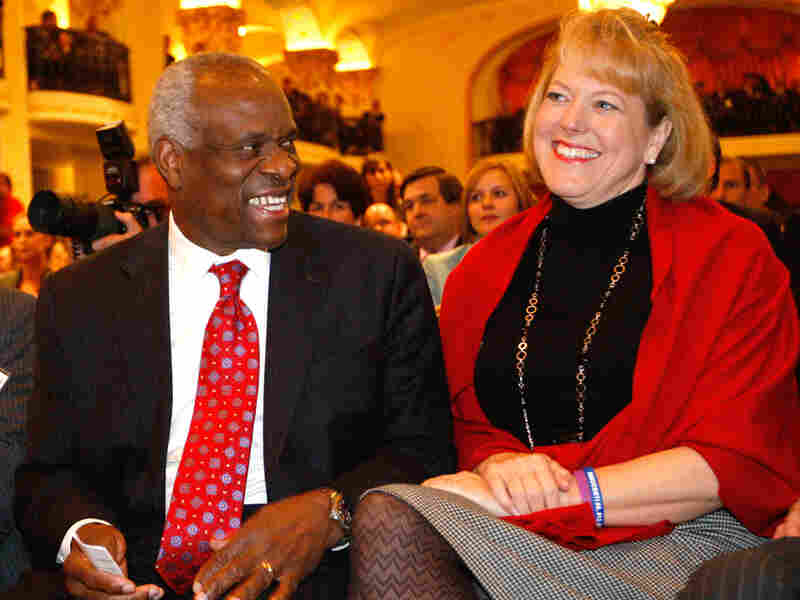 Justice Clarence Thomas with his wife, Virginia Lamp Thomas, in 2007. Under Supreme Court rules, Thomas would decide for himself when a conflict of interest arose in regard to his wife's political group. Charles Dharapak/AP hide caption 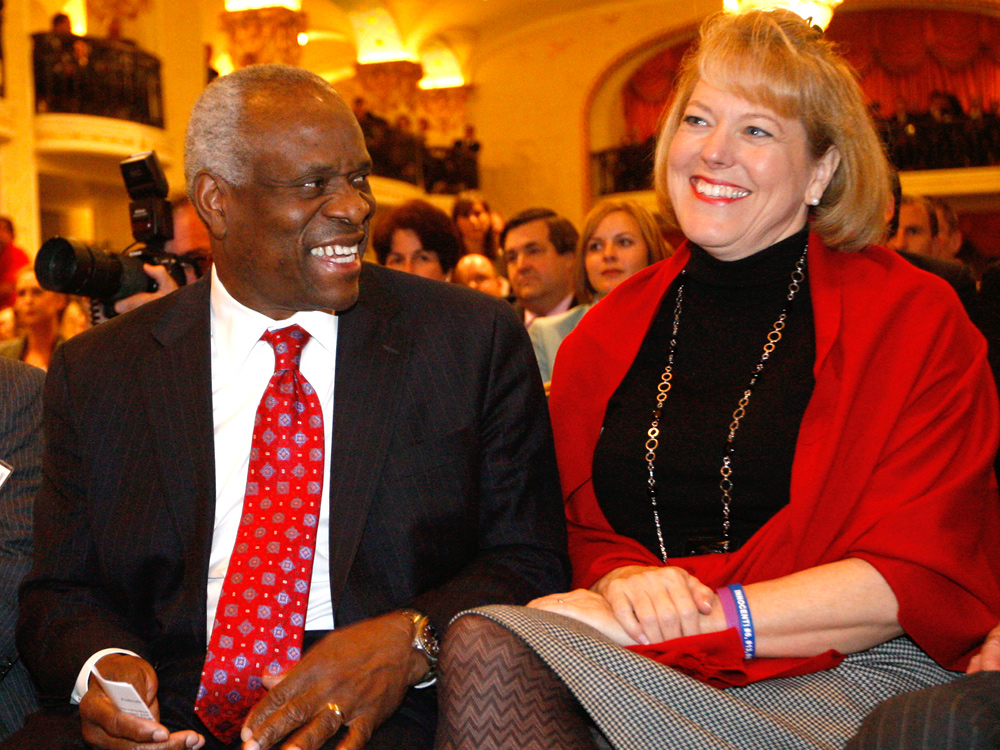 Justice Clarence Thomas with his wife, Virginia Lamp Thomas, in 2007. Under Supreme Court rules, Thomas would decide for himself when a conflict of interest arose in regard to his wife's political group.

Virginia Thomas, wife of Supreme Court Justice Clarence Thomas, is aligning herself with the Tea Party movement and has formed a new organization to promote its ideals. Although she has often worked for conservative politicians and organizations, Thomas' new role is raising questions about potential conflicts of interest for her husband.

Thomas, known as Ginni, has long worked on behalf of political conservatives. She was a top aide to Republican House Leader Dick Armey, and in 2000, while Bush v. Gore was before the U.S. Supreme Court, she was working at the conservative Heritage Foundation, helping to recruit staff for a possible Bush administration.

Now she is president and CEO of a political startup called Liberty Central, which advertises itself as linked to the Tea Party movement and its values.

As Thomas put it at the recent Conservative Political Action Conference in Washington, "I have come to know and love the Tea Party Patriots. It has been a privilege to become a bit of an ambassador of sorts for the National Board."

Her organization, she said, will correct the record and tell the truth that the mainstream media does not. "The hard-left agenda just isn't going down well," she said. Thomas added that "hope and change" — a catchphrase of President Obama's campaign — has now been seen as "a big, old power grab."

Legal ethics experts agree that there is nothing in the Code of Judicial Conduct that prevents the spouse of a judge or justice from taking public political positions.

New York University law professor Stephen Gillers, author of a leading text on legal ethics, says judges are supposed to ensure that they do not sit on cases in which their spouses have a financial interest.

But, he said, "Ideological issues, as opposed to monetary ones, are not a subject of concern." A judge's spouse, he said, "can have a full political life, and take positions on political issues and legal issues, even ones that come before his or her spouse."

That does not mean that Thomas' role in her new organization is problem-free. She has said she will accept contributions from a variety of sources, including corporations, under campaign finance rules recently loosened by the Supreme Court.

Gillers says "the crunch point" will come if Thomas' organization "gets substantial contributions from companies or trade associations that have interests in matters that are pending at the Supreme Court, or headed for the Supreme Court."

Speaking hypothetically, he said that if "it turned out that a justice voted for a particular company, and a week later it's discovered that that company — or the trade association of which it was a member — made a substantial contribution to the justice's spouse's charity or political organization, the public is going to be rightfully suspicious."

Liberty Central lists itself as nonpartisan, but its Web page has a distinctly conservative cast. On the site, Thomas lists herself as a "fan" of Rush Limbaugh and says she is "intrigued" by Glenn Beck. She said at the Conservative Political Action Conference that her group would be active in the November elections, but she did not specify how.

Should her activities raise any questions about a conflict of interest for her husband, he is the person who would decide whether to recuse himself from a case.

Federal judges in the lower courts can be removed from a case over a conflict — but in the Supreme Court, the individual justices make the decision for themselves, and it is not subject to review by anyone else.

"I did not give up my First Amendment rights when my husband became a justice of the Supreme Court," Thomas says. "My involvement with LibertyCentral.org has been vetted by the Supreme Court ethics office and Liberty Central's own board of directors. There have been many other judges who have spouses that are politically active."

Justice Thomas has declined to comment about his wife's new role.