Accessibility links
How To Make Shift Work Family Friendly Low-wage workers face the most rigid schedules, even as they need flexibility the most: A disproportionately high number are single moms. Researchers say small changes — like making it easier to trade shifts — can result in big benefits for workers and employers alike.

On Aug. 10, 2005, Vickie Underwood was nearing the end of her shift, overseeing the production run at a printing plant near Atlanta.

"At the time, I had been working at the plant for over 22 years with an unblemished work record," she says.

When she got off at 3 that afternoon, Underwood needed to hurry home to register her kids at two different schools and sign up the youngest for aftercare. The county was holding a one time all-day registration, 7 a.m. to 7 p.m., to accommodate working parents — which is ironic, considering what happened at 2, with an hour to go in Underwood's shift.

"I was asked to work three hours mandatory overtime. I mentioned to them that I had to register my kids for school, and they told me that I couldn't leave," Underwood says.

Underwood had worked last-minute overtime dozens of times before, but on this day she said no. Since school registration is mandatory, she didn't really think she'd get in trouble. In fact, her bosses skipped right over any disciplinary measure and fired her. Underwood says her family was devastated and dumbfounded.

"My family was like: 'Huh? How could this happen?' And it was almost like, 'No, they had to fire her for something other than her kid,'" Underwood says. "No one wanted to believe that's what I was actually fired for."

Underwood fought a year without pay before finally getting her job back, and she was lucky to have a union backing her up.

'There's A Lot Of Flexibility ... It's Called Quitting'

Work-life experts say cases like Underwood's happen a lot because of the unpredictability so many low-wage and hourly workers face: schedules posted just days in advance, rotating schedules, unexpected overtime some days, while other days they can show up only to be told business is slow, they should go back home — without pay.

"I always say, there's a lot of flexibility in those jobs, but it's called quitting," says Joan Williams, head of the Center for WorkLife Law at the University of California.

While much of the focus around job flexibility has centered on an elite cubicle culture who can work from Starbucks on their laptops, Williams says low-wage workers often need it more. First, they actually have to be at the store, hospital or factory. What's more, a disproportionate number are single moms, yet wildly variable schedules mean they essentially have to be on-call at-will.

"We're certainly familiar with this at the top of the income heap with executives, investment bankers and lawyers," Williams says. "But a recent study showed that even for minimum-wage jobs, employers put a premium on someone who says, 'I'm always available.'"

Getting A Little Understanding From Managers 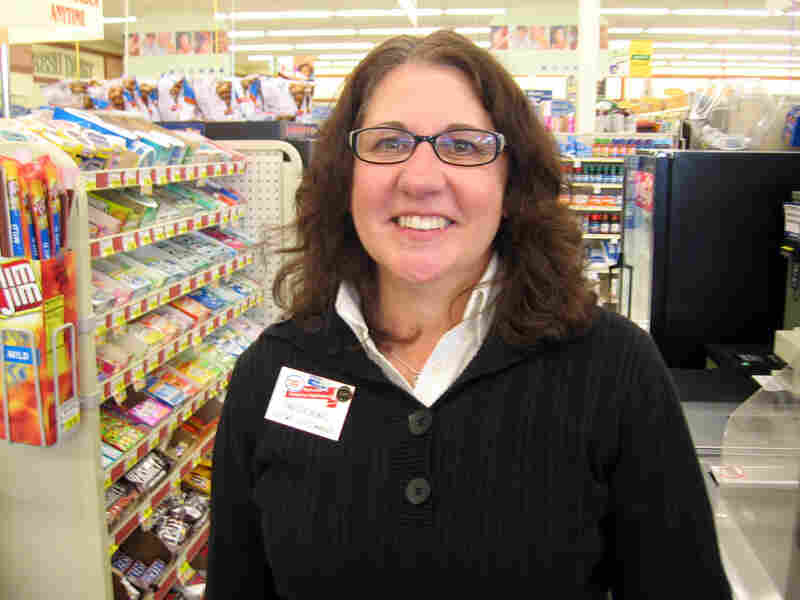 Tina Stachowicz is the customer service manager at the Family Fare grocery in Bryon Center, Mich. During a flexibility training program, she noted each time she said hello to employees, asked about their family or changed the schedule to accommodate a personal conflict. Jennifer Ludden/NPR hide caption 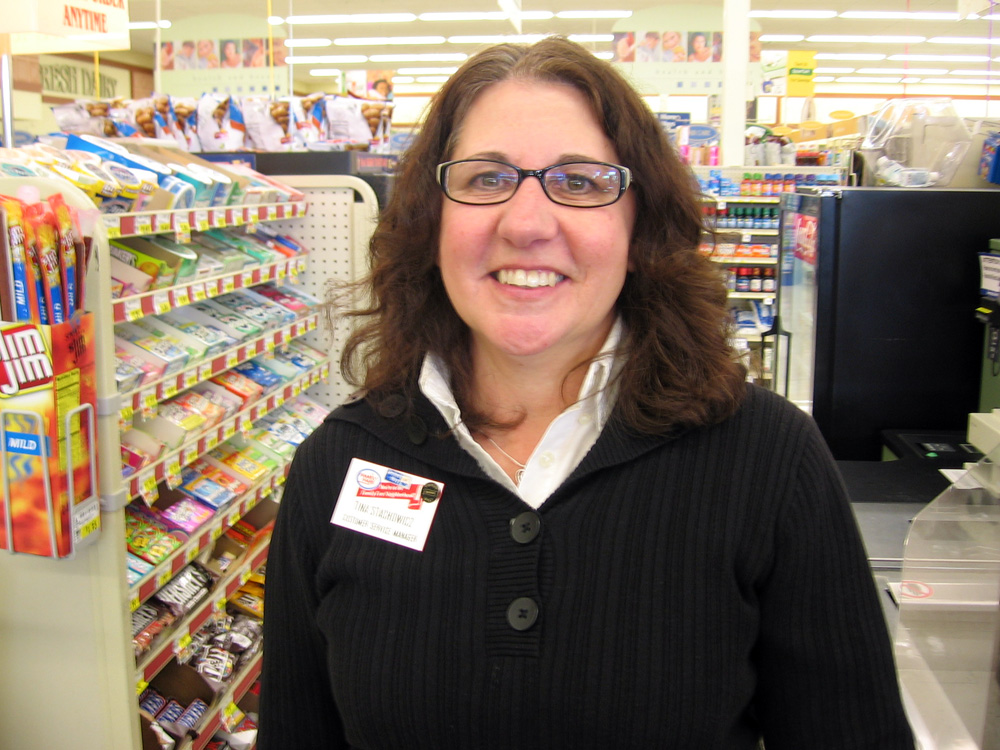 Tina Stachowicz is the customer service manager at the Family Fare grocery in Bryon Center, Mich. During a flexibility training program, she noted each time she said hello to employees, asked about their family or changed the schedule to accommodate a personal conflict.

So in today's 24/7 economy, can a low-wage workplace be family-friendly?

"Every job, even an hourly job, can have some flexibility," says Ellen Kossek of Michigan State University.

She's helping conduct a National Institutes of Health study that's taking on the hardest cases for flex work. Kossek believes the key is making sure that managers understand what their employees are up against, and she used a chain of Michigan grocery stores to test her theory.

In half the stores, she had managers watch a video on flexibility, then asked them to keep a notebook and mark down each time they said hello to their staff or solicited information about personal conflicts with work.

"We'd have one question, if you're asking about their family," says Tina Stachowicz, a customer service manager who participated. She says she also asked about "sporting events with the younger ones, because a lot of them are in sports. How's school going, that type of thing."

Can Flexible Work Make You Healthier?

When you search for risk factors for cardiac disease, obesity or any number of ailments, you likely won't see "your job" listed in any medical manual. But Lynne Casper, a sociologist at the University of Southern California, believes the link should be obvious.

"Our lives have sped up," she says. "We don't have down time. This is a public health issue."

A few years ago, when Casper was at the National Institutes of Health, she helped launch a wide-ranging study to explore the health impact of flexible work — or lack of it. Researchers surveyed employees at Best Buy headquarters, which had implemented an aggressive flexible work program, and also at grocery stores, hotels and nursing homes. They asked who had the most accommodating managers and matched that information against a range of health measures. Lisa Berkman, a social epidemiologist at Harvard University, says the results were striking.

Employees with the most rigid managers "had about a two-fold risk of having two or more cardiovascular risk factors. And the amazing thing was that they slept about 30 minutes less per night than people whose managers were more open and creative."

One study also included family members of employees. It found that on days when a parent reported a work conflict with a manager or co-worker, their children had a higher level of cortisol, an indicator of stress.

The NIH is now expanding its study, conducting research at a telecommunications company and a chain of nursing homes. Berkman says the results could show that "how work is designed causes poor health. And that has implications for businesses and their bottom line."

Managers were also asked to be role models, so they'd talk about leaving work early themselves to see a child's school play, for example. Researcher Kossek says such small things can have a big impact.

"If you work for a workaholic or someone who acts like they don't have a family, you feel reluctant to talk about your own personal needs," Kossek says.

The managers would also note each time they helped someone resolve a conflict, perhaps by switching around the schedule.

Good For Workers And Employers

The NIH wanted to know whether this kind of flexibility at work can improve employee health, so they matched manager flexibility against various measures of employee well-being. Kossek says those with the most accommodating managers "had better physical health reports, better sleep quality, higher job satisfaction, and less stress over work-life conflicts."

The NIH researchers are expanding their study to a group of nursing homes, hoping to convince companies it's in their best interest to be accommodating and that it's just not that hard.

Kossek says it could mean posting schedules farther in advance, making it easier for workers to trade shifts or cross-training more people for the same job — or simply easing rules on cell-phone use.

A five-minute break would allow a cashier to call her child "even if it wasn't when her official break was, but when she knew the bus got home," Kossek says.

At a Family Fare grocery south of Grand Rapids, Mich., Tina Burgess worked part time for 13 years, juggling her hours around raising two young boys. Shortly after she took part in the flexibility study, a full-time front office job opened up. Burgess wanted the benefits that came with that job, but there was a problem: it started at 5 a.m. Her husband left for work at 5:30, so Burgess needed to be home to get her children to school. Her manager worked it out.

These days, Burgess does start work at 5 in the morning, counting up sales from the day before and readying the cash registers for the day ahead. Her teenage sons keep their cell phones on their pillows, and every morning at 7 she calls to wake them.

One day earlier this year, Burgess has to call her son Aaron a few times. "He went snow boarding yesterday, so he's probably wiped out," she says, shaking her head with a smile. She tries her other son, and a sleepy-sounding Jordan picks up. "Hey, mom." 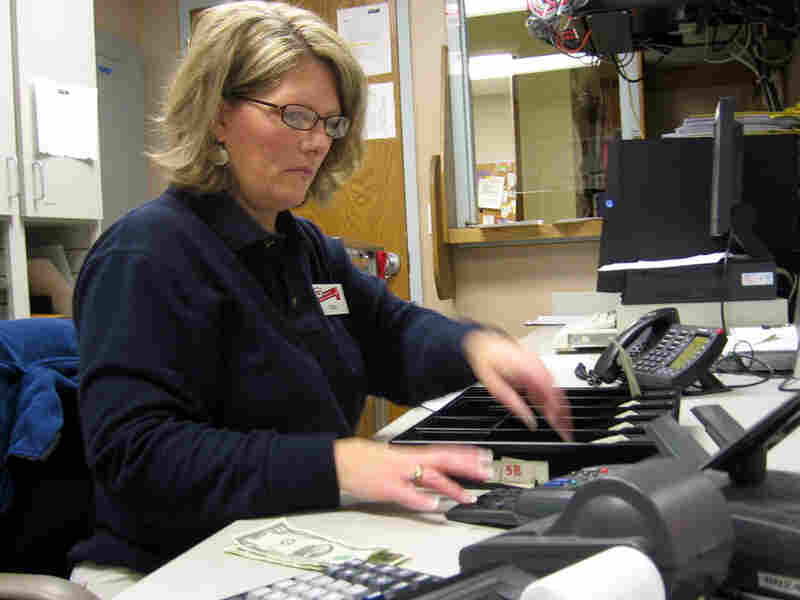 Tina Burgess opens the front office at 5 each morning at the Family Fare grocery in Byron Center, Mich. About two hours later, she returns home briefly to help her two sons get ready for school. Jennifer Ludden/NPR hide caption 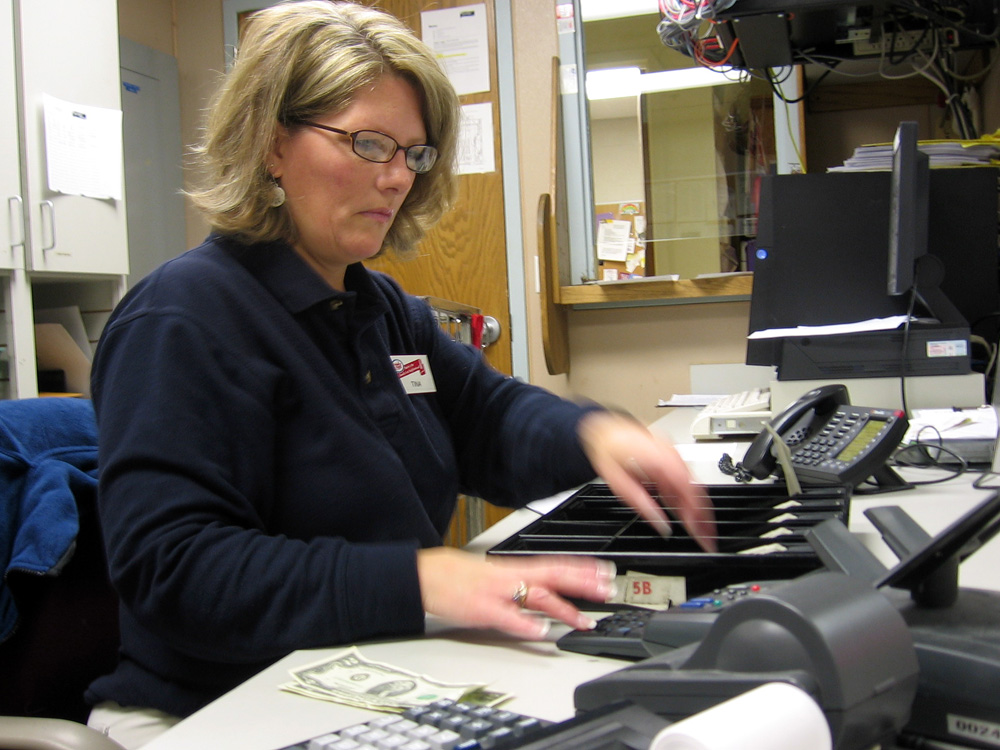 Tina Burgess opens the front office at 5 each morning at the Family Fare grocery in Byron Center, Mich. About two hours later, she returns home briefly to help her two sons get ready for school.

"Hey, Aaron's not answering his phone so you wanna get him up?" Burgess asks.

Burgess starts brewing the complimentary coffee just inside the front doors, checks in with a colleague, and at 7:15 heads out for the short drive home.

At the house, the sleepy boys gather their things in the living room while Burgess packs lunches and hands out after-school spending money. Then, with a quick "I love you," she's back out the door.

Burgess used to take the boys to school, but her oldest recently got his license. As she drives back to work, she muses that they could probably manage without her now. Still, she says this small ritual is important to her.

"Sometimes in the morning, I get a feel for if it's going to be a bad day," she says. "Maybe they want to say something before they go to school. If I wasn't there, they wouldn't be able to."