Accessibility links
Refugee All Stars: From Sierra Leone To New Orleans Emerging from the refugee camps of Sierra Leone's civil war, the Refugee All Stars have seen their fair share of hard times. But, as Banning Eyre finds on their latest album, Rise And Shine, the group's focus is on spreading a positive message of peace. 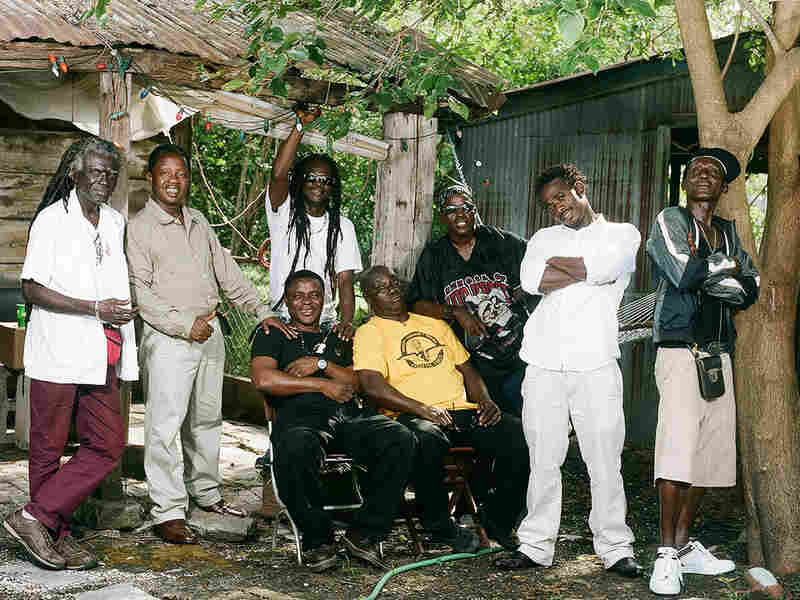 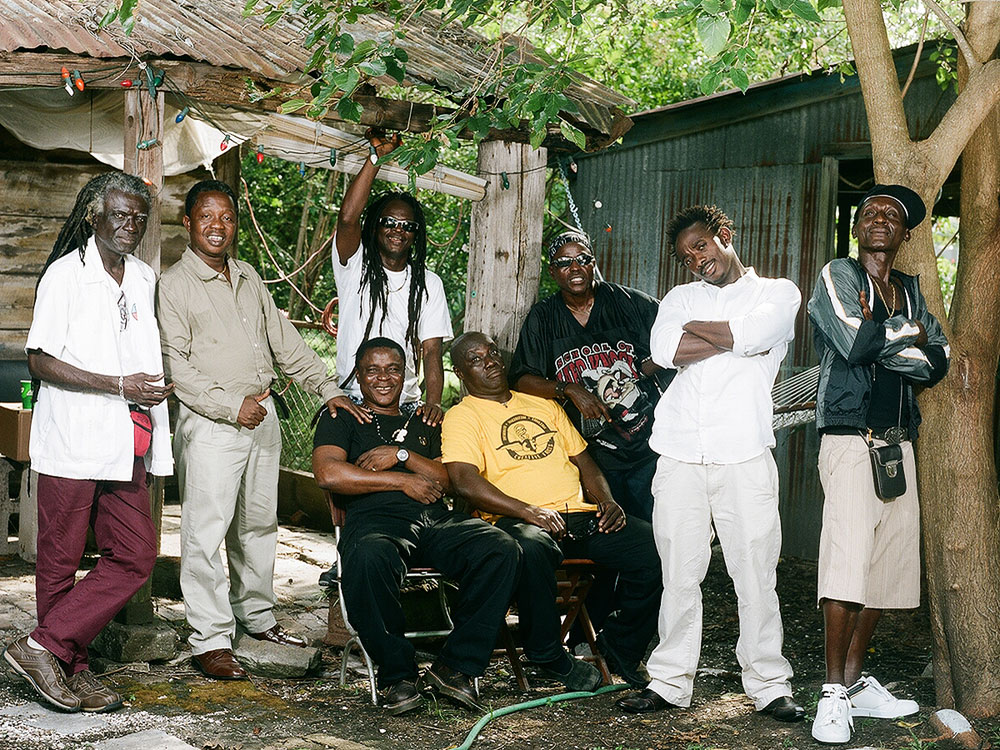 Members of Refugee All Stars.

The musicians of Sierra Leone's Refugee All Stars first came together in West African refugee camps during the waning years of Sierra Leone's civil war. Their story was the subject of a documentary film, which helped launch an international career for the band after the release of their debut CD in 2006. The group's second album is called Rise and Shine.

The Refugee All Stars share experiences of violence, loss and the tedium of life in the camps. But when they make music together, something unexpected emerges: buoyant grooves and fierce optimism. Rise and Shine stays true to this band's earthy, informal mix of reggae and West African genres. A couple of these tracks sound like they were recorded around a campfire with just drums and acoustic guitar. Others make a nod to contemporary trends in popular dance music.

The youngest member of the Refugee All Stars, Black Nature, brings a dance hall feeling into the mix. "The older members always call me the engine," he says, "because I helped bring in a generation, you know — like the kind of thing I do, the kind of style I sing, or the dance moves. As long as I'm on stage, the stage becomes my office. No joke. You know, my mission on stage is to let the people know that the band is incredible."

The All Stars began the album in Sierra Leone and finished it in New Orleans, where session brass players added heft and polish to the band's roots-reggae sound. "We fell in love with the place," Black Nature says about New Orleans. "It's a really unique place, full of rich, rich culture."

Refugee All Stars co-founder Reuben Koroma sees similarities between New Orleans and Sierra Leone. "Well, New Orleans, it's like Africa. The foodstuff that people eat there really has, I mean, 100 percent resemblance to the type of food we eat in Africa," he says. "And one other thing that fascinated me most: New Orleans happens to be a city that there is great evidence of live band performance, and I really enjoy that kind of thing."

Koroma says their song "Jah Come Down" makes an even deeper connection between Freetown, Sierra Leone, and New Orleans — the shared history of the Atlantic slave trade. "When slavery was abolished, most of the slaves were languishing in England, and people felt that they should find a place to bring them back. And then Freetown was chosen. And the idea is, for 400 years, black people were transported to the great America for work," Koroma says. "I know that their relatives and their siblings must have missed them a lot, and the separation of people really created a very, very negative impact in Africa. So I just think of reminding people about that past history. And I believe that for the white slave master to abandon slavery, it was really the miraculous work of God. That's why I say 'Jah come down.' It was Jah who really told them, selling your fellow human being is really cruel. And they realized their mistake, and then they stopped it."

Now that Sierra Leone's civil war is over, the band is turning its attention back to the music and concerns of their country. Their song "Oruweibe/Magazine Bobo" uses local goombay percussion to talk about life in the Freetown slum where most of these musicians grew up. "Magazine is the poorest place in Sierra Leone," Koroma says. "You know, most of the poor people are really living there. I mean, no one would have thought that Magazine would produce important people, and coincidentally, most of us hailed from that place, and we are now celebrities. So it's like we are talking about that. Magazine Bobo is a great man, because he has made an impact in the world."

The Refugee All Stars' journey from Magazine to the refugee camps, to New Orleans and the stages of the world has inevitably affected their songwriting. Koroma acknowledges that the perspective has broadened, but he says the band's essential mission remains the same. "It's really a long struggle out of the war, out of miserable conditions," he says. "But it matters really very seriously that we do not really think about ourselves alone. We think about the world, giving our messages into the world, positive messages, so that we can expect a positive change in the world and, most importantly, peace."