Accessibility links
Civil Rights Photographer Charles Moore Remembered Charles Moore put faces on the civil rights movement for a nation to see. His photographs for Life magazine reached half of the nation. Images of snarling police dogs, water cannons, the Ku Klux Klan and Bloody Sunday helped spur the passage of the Civil Rights Act of 1964. Moore died March 11 at the age of 79 of kidney disease and other ailments.

Charles Moore put faces on the civil rights movement for a nation to see. His photographs for Life magazine reached half of the nation. Images of snarling police dogs, water cannons, the Ku Klux Klan and Bloody Sunday helped spur the passage of the Civil Rights Act of 1964. Moore died March 11 at the age of 79 of kidney disease and other ailments. 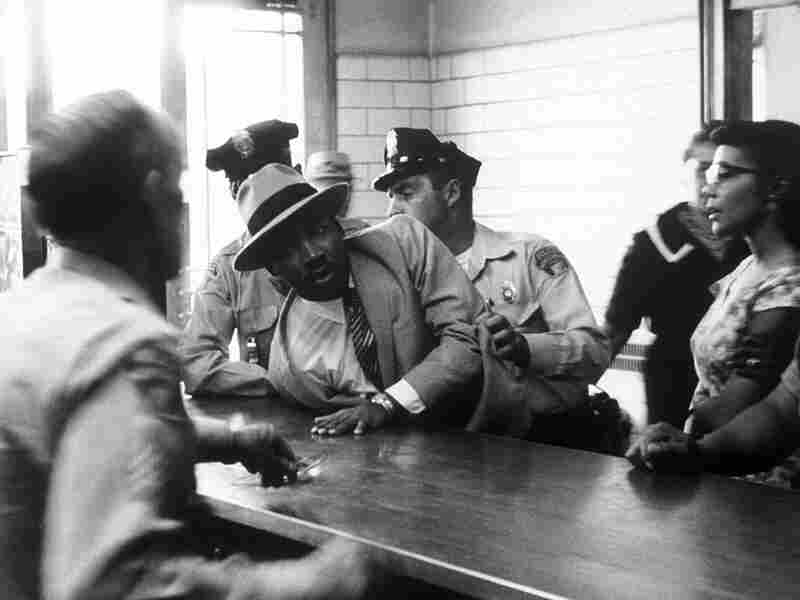 Dr. Martin Luther King Jr. is sprawled across a police desk as his wife looks on. He was arrested while trying to attend a hearing for civil rights leader Ralph Abernathy and was released when his identity became known to the police. Montgomery, Ala., 1958 Charles Moore/Black Star hide caption

There are common names associated with the Civil Rights Movement: Rosa Parks, Martin Luther King Jr. Well, Charles Moore is not well-known, but his photographs are. They often appeared in Life magazine in the 1960s, and they put faces to the movement.

Moore died last week at age 79, and Claire O'Neill has this remembrance.

POST-BROADCAST CORRECTION: The actual date of the documentary in which Charles Moore appeared is 2005.

CLAIRE O'NEILL: Charles Moore had been in the military, he'd been a boxer, but as he said in the 1995 documentary, his weapon of choice in the 1950s and '60s had a flash and a shutter.

O'NEILL: As a white, Southern journalist born and raised in Alabama, he was fighting against Jim Crow discrimination the only way he knew how: by taking pictures.

Mr. BEN CHAPNICK (President, Black Star): He was not a cool, detached photographer. He was very viscerally involved with everything he photographed.

Mr. CHAPNICK: He had one thing that most of the other photographers didn't have: He insisted on getting in close. Very rarely, if ever, did he use a long lens. He was always right in the middle and quite often, you'll see him in other people's pictures.

O'NEILL: At Moore's side for many stories was Michael Durham, staff writer for Life magazine at the time. He was the reporter, but he let Moore do most of the talking - for a reason.

Mr. MICHAEL DURHAM (Former Staff Writer, Life Magazine): He had this Southern gift of gab. He just had a way of diffusing suspicion and hostility. And once they realized that he was a good 'ol boy then generally, things went pretty smoothly.

O'NEILL: The two snuck into churches and around police lines to get their stories. Moore somehow knew where to be and when, says John Kaplan, professor at the University of Florida. A Pulitzer Prize-winning photographer himself, he wrote his master's thesis on Moore.

Professor JOHN KAPLAN (Photography, University of Florida): Charles Moore had a longstanding relationship with Martin Luther King. They met at the Dexter Avenue Baptist Church in Montgomery, where King was, at first, just a local minister. And interestingly, they were both sons of Baptist ministers, so they did have a lot in common. And Martin Luther King knew that people like Charles Moore could really help him publicize the power and the mission of the movement.

O'NEILL: Charles Moore's photographs are often credited with spurring the passage of the 1964 Civil Rights Act.

Prof. KAPLAN: Everybody in America had seen those pictures and yet, you know, when I met Moore and we just started chit-chatting, I realized there was so much behind the power of the images themselves - you know, how they were made, how he got access. Really has incredible courage. He was really, one of the unsung heroes of the Civil Rights Movement.

O'NEILL: Moore lived long enough to see the result of his work and the collective struggle of so many others.

Mr. MOORE: I have now been back and have seen the growth from the seeds that were sown through a lot of terrible violence and my camera as my tool. And I would rather have that be my weapon than my fists, any day.

O'NEILL: In the 1950s and '60s, Moore may not have realized the impact that his work would have. In a sense, he was just photographing events as they unfolded in his own backyard.

We incorrectly said that Charles Moore appeared in a 1995 documentary. The actual date of the documentary is 2005