Accessibility links
Iran Halts Travel By Poet Simin Behbahani, Known As 'Lioness Of Iran' Simin Behbahani, Iran's most prominent poet, was about to board a flight to Paris when police seized her passport. Behbahani, 82 and nearly blind, has not been charged with any crime. Many fear her treatment may signal a rise in repressive tactics by Iran's government. 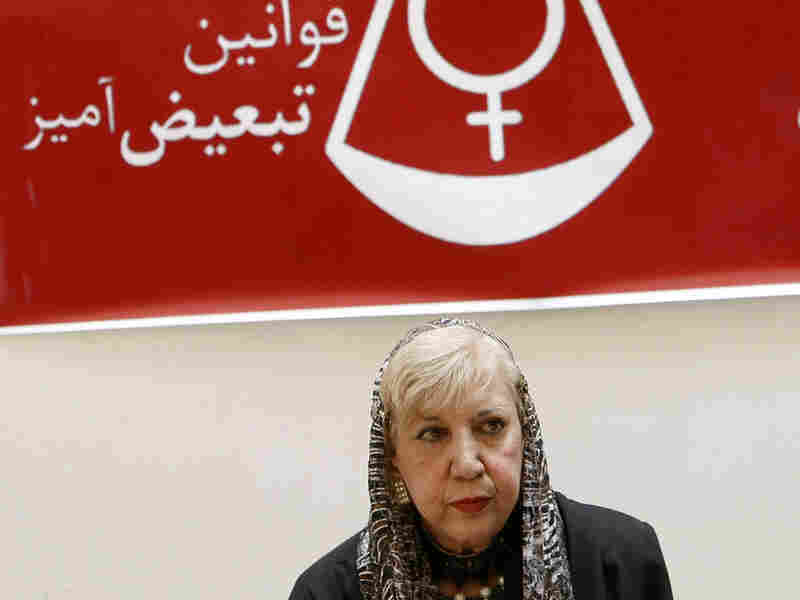 Iranian authorities recently confiscated the passport of Iranian poet Simin Behbahani (shown here at a press conference in Tehran in 2007), who was scheduled to travel to Paris to read her poetry at a conference. No charges have been filed against Behbahani; her passport has not been returned. Behrouz Mehri/AFP/Getty Images hide caption 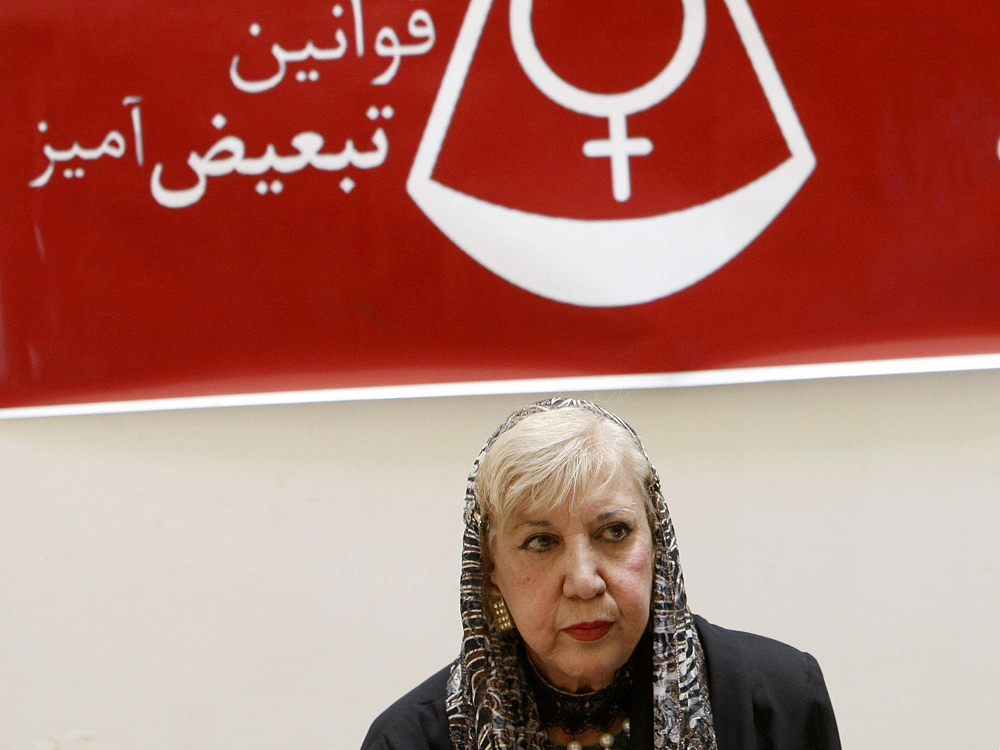 Iranian authorities recently confiscated the passport of Iranian poet Simin Behbahani (shown here at a press conference in Tehran in 2007), who was scheduled to travel to Paris to read her poetry at a conference. No charges have been filed against Behbahani; her passport has not been returned.

The authorities in Iran continue to block the travel of the nation's most prominent poet.

Last week, as she was about to board a flight to Paris, police seized the passport of Simin Behbahani, who is 82 and nearly blind.

Behbahani was interrogated all night long and then sent home — without her passport.

So far, she has not been charged with any crime. Neither the police nor the Revolutionary Court has asserted any legal basis for taking her passport.

'We All Thought She Was Untouchable'

Through it all, she was not imprisoned and continued to enjoy the freedom to travel, says Farzaneh Milani, who teaches Persian literature at the University of Virginia and is one of Behbahani's translators.

"We all thought that she was untouchable. And it's amazing that a woman of 82, a woman who can barely see anymore, a woman who has brought nothing but pride for Iran, is now a prisoner in her own country," Milani says.

Poetry Of The 'Lioness'

NPR posted two of Simin Behbahani's poems, including "Stop Throwing My Country to the Wind," on its Web site in June 2009. Learn more about them and hear Behbahani read the poems in Farsi over a telephone line from Tehran (with a reading of the English translation provided by NPR producer Davar Ardalan).

Behbahani has been nominated twice for the Nobel Prize in literature, and she has received many literary accolades around the world. She was on her way to read her poetry in Paris, where last year she was awarded a prize for her defense of women's freedom.

In a 2007 interview with NPR in Tehran, Behbahani expressed horror at the practice of stoning to death women convicted of adultery.

"In the last 28 years after the revolution in Iran, this has been repeated. And even once at the beginning of the revolution, we had a woman condemned to stoning to death. While they were stoning her, she would not die, as she was resisting. At the end, one of the police, or Revolutionary Guards, got a piece of heavy cement and put [it] on her head to kill her," Behbahani recalled.

In recent years, it has not been easy for Behbahani to publish her poetry in Iran, and for much of the last decade, she was not able to publish at all. Not long ago, she did release a book of poems, but only after government censors required her to remove 40 poems or fragments of poems.

In 2007, the government closed a magazine that published a poem of hers about the Iran-Iraq war.

That pressure didn't hold Behbahani back after Iran's presidential election last June. Millions of people poured into the streets to challenge the declared result, which gave President Mahmoud Ahmadinejad another four-year term.

The protesters were met with police truncheons and rifle fire. Behbahani wrote "Stop Throwing My Country to the Wind," a poem adding her voice to that of the protesters:

Stop this extravagance, this reckless throwing of my country to the wind. The grim-faced rising cloud will grovel at the swamp's feet.

My curses will not be upon you, as in their fulfillment. My enemies' afflictions also cause me pain.

You may wish to have me burned, or decide to stone me. But in your hand match or stone will lose their power to harm me.

Behbahani has been told to appear at the Revolutionary Court in order to get her passport back, but so far she has declined.

Milani, one of the translators of "Stop Throwing My Country to the Wind," is fearful Behbahani's treatment may signal intensified repression in Iran.

"She has been doing this all her life. She has always said, 'I'm going to write what I see. I'm going to be honest and candid and truthful,'" Milani says. "I believe she has never sold her pen or her soul. Simin Behbahani has always written poetry that portrays the reality of life in Iran."

An Interview With Simin Behbahani June 26, 2009