Accessibility links
Music Reviews: 'Keep Your Eye On The Sky" by Big Star — Alex Chilton: Remembering A 'Star' Musician Alex Chilton died yesterday. He was the lead singer of the Memphis band Big Star. To remember the underground legend, Ed Ward reviews Keep an Eye on the Sky, a four-disc collection of recordings, demos and outtakes.

Alex Chilton died yesterday of an apparent heart attack in New Orleans. Chilton was the lead singer of rock group Big Star, which formed in Memphis in the 1970s. Though they never quite made it big while they were active, the band became an underground legend. Chilton and Big Star were revered by the generation of musicians and fans that came after their short career; The Replacements wrote a song fantasizing that Chilton was a superstar, beloved by millions.

As a teenager Chilton had several hits with his band The Box Tops, and after Big Star broke up, he continued to release solo records. In the '90s, he re-formed Big Star with drummer Jody Stephens to tour; the group was scheduled to perform this weekend at the South by Southwest music conference in Austin, Texas.

One of the most welcome reissues of last year was Keep an Eye on the Sky, a four-disc collection of Big Star's recordings, demos and outtakes. In remembrance of Chilton's career, we rebroadcast Ed Ward's review of the box set. 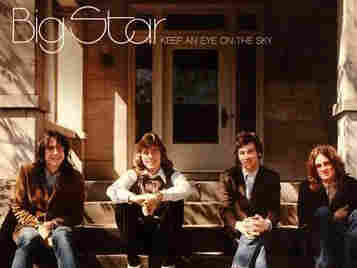 Big Star acquired a cult following in the 1980s, when other groups started sampling their songs. Rhino Records hide caption

The statement, usually ascribed to Peter Buck of REM, that only a thousand people bought the Velvet Underground's albums in the 1960s — but every one of them started a band — also holds true for a Southern band whose albums in the 1970s sold even fewer copies, but whose posthumous reputation is just as large. Rhino Records has released Keep an Eye on the Sky, a four-disc collection of recordings, demos, and outtakes by Big Star, as well as an expanded version of I Am the Cosmos, a collection of recordings by founding member Chris Bell.

Big Star was almost named the Sweden Kream. Taking a break from recording at Ardent Studios in Memphis one evening, the four band members, Alex Chilton, Chris Bell, Jody Stephens and Andy Hummel were standing outside talking about what to name this group which had suddenly come into being. There were two buildings across the street. One was an ice cream shop, the other a Memphis grocery chain with a big red star as a logo.

Bell, Stephens, and Hummel were school friends, and Chris and Jody worked at Ardent at night, learning how to run a recording studio. They were rabid anglophiles; Chris often told his brother he'd been born in the wrong country at the wrong time and should be leading a band like the Who or the Kinks. Certainly they wrote some interesting songs, and at one point, John Fry, one of the owners of Ardent, went to New York with a tape they'd made, only to have it turned down being as too derivative of the Beatles.

Into this situation came Alex Chilton, who, as a 16-year-old, had tasted major success as the front-man of the Box Tops, whose hits "The Letter" and "Cry Like a Baby" had given him an education in how to be ripped off by your record company. He'd used Ardent for some Box Tops sessions, and now that he was free of his contract, he dropped by to see his old friend Chris Bell. Soon, he was at Ardent at night, too, and writing songs with Chris. They were good.

The best Big Star songs are a distinctly American take on the kind of pop the British Invasion had brought to this country, and far from the sort of southern rock the Allman Brothers and others were doing in 1972, when Big Star's ironically named debut, #1 Record, was released on the new Ardent Records label. Ardent did recording for Stax when Stax's studios were overbooked, and with Stax being distributed by Columbia, Ardent, as a division of Stax, was assured of blanket distribution.

But that's not what happened. A casualty of machinations within Columbia, #1 Record barely got distributed at all. It got a rave review in Rolling Stone, but a rave review's not much good if you can't buy the album. Chris Bell, who'd been working for years on this band, before Alex Chilton came along, was devastated. To make things worse, his long-time girlfriend left him. Words were spoken, fists flew, and by the time it was over, Chris was in a psychiatric institution. Alex and the other two continued making demos, and a couple of years later, in 1974, a second album, Radio City, appeared; it was even better.

"September Gurls" would be a hit, but not for Big Star, and not for over a decade, when the Bangles recorded it in a more pop-friendly world. Andy Hummel threw in the towel and went back to school. Meanwhile, Chris Bell was recuperating. Like Chilton, he was from a wealthy family, so it was relatively easy for him to pack up with his brother and head to Europe for an extended trip. He took with him two recordings he'd made, and was honored when Beatles engineer Geoff Emerick mixed one of them for him.

But he couldn't get any record companies to bite on "I Am the Cosmos" or the equally-excellent "You and Your Sister," even after EMI had reissued the two Big Star albums in England, so he went back to Memphis and took a job with his family's restaurant management company while recruiting a band of young kids to work with him. Coming home from a rehearsal late at night a few days after Christmas, 1978, he went off the road at high speed and was killed.

Rumors persisted among the growing Big Star underground, though, that there was a third album in the can, tracks cut in 1974 by Alex and Jody, who was still working at Ardent as an engineer, and overseen by producer Jim Dickinson. There was, in fact, and it was experimental, eccentric, and uncommercial — just what the fans wanted.

By the time the album — titled either Third or Sister Lovers, depending on which version you bought — came out in 1978 on the tiny PVC label, Big Star was history. Jody continued to work at Ardent, and Alex spent a number of years washing dishes in a New Orleans restaurant. Eventually, however, the band's reputation hit critical mass, and reissues became available. All those kids who'd bought #1 Record and Radio City had bands now, and their music was called power pop. Chilton emerged, reluctantly, to record some more and produce the Cramps. He still wasn't a big star, but he was a legend.