Accessibility links
Quantum Physics Leaps Into The Visible World In the world of atoms, one thing can exist in two places at once. But on a larger scale, that rule usually breaks down. For the first time, scientists have put an object large enough to be seen with the naked eye into a state where it exhibits "weird" quantum behavior. 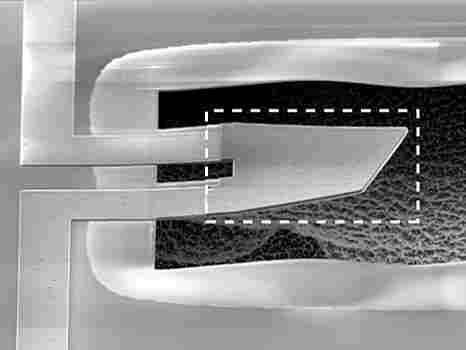 A magnified view of the tiny hair-thin device, called a resonator, that scientists used to observe quantum mechanics in action. This is the first time that quantum properties have been recorded in anything larger than a bundle of atoms. A. D. O’Connell/Nature hide caption 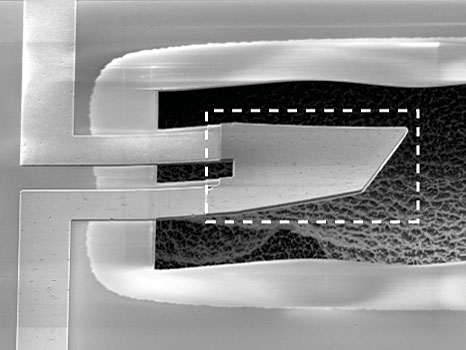 A magnified view of the tiny hair-thin device, called a resonator, that scientists used to observe quantum mechanics in action. This is the first time that quantum properties have been recorded in anything larger than a bundle of atoms.

Scientists in California have done something astounding. They've shown that physical laws thought only to rule in the mysterious realm of atoms and electrons can also apply to stuff you can actually see.

Isaac Newton was pretty much right on in describing the physical laws of how objects in our world behave. But those laws break down when you get to the world of single atoms. So modern physicists came up with a new set of laws, called quantum mechanics, that does explain how things like atoms behave.

Andrew Cleland of the University of California-Santa Barbara says some of the laws are ... well, the word "weird" comes to mind.

Cleland says at first, scientists thought the laws of quantum mechanics applied to objects on the atomic scale. Cleland says it's true — physicists have observed quantum effects in structures as large as 60 atoms. That's large for the atomic world, but totally invisible in our world.

Cleland wanted to see if he could find the size where the laws of quantum broke down and everyday laws take over.

A Structure Extremely Large For The Atomic World

Technically speaking, Cleland and his colleagues used a "microwave-frequency mechanical oscillator coupled to a quantum bit." While true, that's not very informative for most of us. Let's just say that they took something very small.

"The diameter of the structure is about that of a human hair, maybe smaller," he says. But that's extremely large for the atomic world.

They cooled their structure to nearly absolute zero, and to their surprise and delight, the structure they created still behaved in a quantum way — a structure you can see with the naked eye.

So now the question is, how far can you go before the laws of quantum mechanics give way to the more familiar rules of our macroscopic world?

Physicist Markus Aspelmeyer of the University of Vienna says physicists are divided on the question of whether or not there's an upper limit.

"I don't think there will be an upper limit. I think there's something very deep and fundamental about the quantum physical laws," he says.