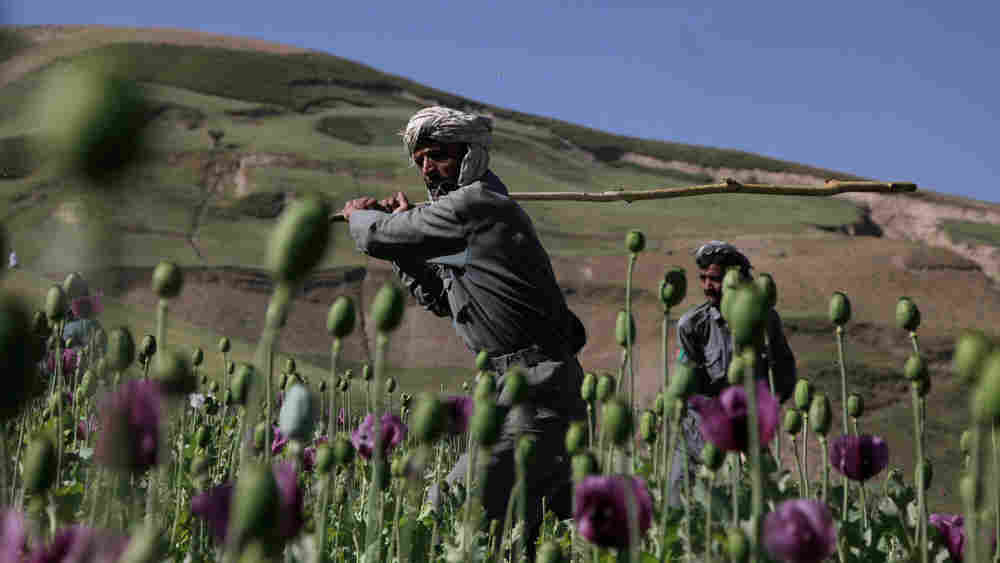 Police officers from the district of Argu swing away with long sticks to eradicate a patch of illegally grown poppies in the Badakhshan province of Afghanistan. The opium trade is a key source of funding for the Taliban — but counterterrorism experts say it will take more than shutting down opium production to crack the Taliban's finances. Julie Jacobson/AP hide caption

The Taliban have long been associated with the opium trade. Counterterrorism officials say the group has developed what amounts to a sophisticated taxation regime that yields money from the production, processing and transport of opium from Afghanistan.

Hard figures are elusive, and estimates vary widely, but the U.N. Office on Drugs and Crime estimates that from 2005 to 2009 the Taliban took in $450 million to $800 million from opium production and trafficking.

The Taliban have also moved beyond poppy growers to extract money from farmers growing wheat and other staple crops.

Beyond that, there is a steady stream of cash that flows to the Taliban, wittingly or otherwise, from Muslim charities and religious institutions outside Afghanistan.

Haroun Mir, director of Afghanistan's Center for Research and Policy Studies, says many of those donations come from the oil-rich countries that make up the Gulf Cooperation Council, or GCC.

"There [is] a network of charities in the GCC countries which directly support institutions in Pakistan which are supporting financially these extremist movements such as the Taliban," Mir says. "And our estimates are in Afghanistan that between $150 [million] to $200 million every year reaches directly to Taliban via this network of charities that exists in the Gulf countries."

Mir says he recently asked Bahrain's foreign minister what can be done to halt the money flowing to the Taliban.

"He recognized the problem," Mir says. "But he responded there is no mechanism in the region to monitor the transfer of charity funding. And I think it would be good if the United States government, in cooperation with the countries in the region, creates a mechanism in order to monitor. And he also mentioned licensing of the charity organizations."

Analysts say that in a region where nongovernmental aid groups and charities operating domestically often face severe scrutiny and regulation, such lack of oversight on the religious charities seems a glaring omission.

Other sources of Taliban revenue include extortion rackets that target various groups — including, indirectly, U.S. taxpayers. Resupply convoys navigating the hazardous Afghan highway system frequently have to hire security firms to protect them, and as often, these security firms pay off militias that control key stretches of road.

A November article in The Nation magazine highlighted the phenomenon. The author, journalist Aram Roston told NPR's Fresh Air that militia commanders, some of whom support the Taliban, are finding it extremely lucrative.

The payoffs can amount to "potentially hundreds of millions of dollars. It's a huge chunk of the security part of the logistics operation," Roston says. "It's really worse than irony: It's, in some cases, just funding the same people you're fighting."

At a December international security conference in Bahrain, a constant topic was Iran's alleged meddling in the region's conflicts, including Afghanistan.

U.S. Gen. David Petraeus told the gathering that Iran is also causing problems for the International Security Assistance Force, known as ISAF, in Afghanistan, the allied NATO forces battling the Taliban. But Petraeus described the support as modest.

"Enough to cause problems for ISAF and Afghanistan in general, but not so much [as] to enable the Taliban to succeed," Petraeus said. "Needless to say, it is not in Iran's interest — a Shiite-led state's interest — to see a Sunni extremist, ultraconservative movement once again take control of Afghanistan."

Defense analyst Christopher Langton says massive financial resources aren't necessary for a group like the Taliban because committing acts of terrorism is relatively cheap compared with waging a war. Still, he said, money can and does play a role in Afghanistan, in sometimes surprising ways.

"For example, Taliban will pay their fighters on a day-to-day basis more than the Afghan National Police pay their police," Langton said. "So in an area where loyalties may be divided, it might be a better deal, if you want to make money just to feed your family, to do a couple of days' fighting for Taliban, or even a bit more."

The U.S. and other governments say they are making progress in blocking some channels of the Taliban's funding. But many experts point to Afghanistan's massive corruption problem as a critical and daunting obstacle.

Clare Lockhart, who directs the Institute for State Effectiveness in London, says Afghanistan desperately needs to get its civil servants back on the job and revitalize the public institutions that are so important to tracking the flow of money into, out of and around the country.

Lockhart emphatically does not agree with those who say Afghanistan is beyond the rule of law, and says the war and ensuing aid effort combined to weaken the government's ability to deal with corruption.

"I think one of the myths about Afghanistan is that 'Afghanistan is ungovernable.' When I arrived and went around the country in early 2002, in most of the provinces there were functioning finance offices and civil service offices," Lockhart says.

"Actually, one of the tragedies of the last few years," she adds, is that "many of those civil servants actually left their jobs, and they became drivers, assistants and translators for the aid effort instead."

Lockhart says that's one reason the Afghan government can't keep track of money flows in the country, such as the hundreds of millions of dollars worth of customs revenue that pours into Afghanistan each year.

"One of the reasons it's so important to have a public finance system that collects that is that if the national treasury of the government of Afghanistan isn't collecting it, then those funds are probably being collected by somebody else," Lockhart says. "So trying to get a better understanding of the legitimate flows of money, and trying to get a handle on the illegitimate flows — the proceeds of crime, of extortion, of tolls, of bribery — is really important."

It is important and fairly straightforward, analysts say, unless you're also trying to fight a war against the Taliban and other insurgents.

But if Lockhart and those who agree with her are correct, until Afghanistan restores its public institutions and empowers them to track, regulate and report on the flows of money in the country, the financial front in the war against the Taliban will not be winnable.

The audio and a previous Web version of this story incorrectly reported that the U.N. Office on Drugs and Crime says that between 2003 and 2008, income from drug protection and trafficking for al-Qaida and the Taliban reached a combined $18 billion. In fact, $18 billion is the estimated total opium revenue in Afghanistan for the years 2003-2008, according to the UNODC. The Taliban's share is estimated at between $90 and $160 million a year over the past five years, according to the UNODC. There is no separate estimate for al-Qaida.