Accessibility links
Fake TV Game Show 'Tortures' Man, Shocks France In a documentary disguised as a game show, participants gave what they thought were electric shocks to a rival contestant when he got a question wrong. They were urged on by an attractive host and an audience chanting, "Punishment! Punishment!" The show reveals how people will set aside their values and obey sadistic orders in the face of authority. 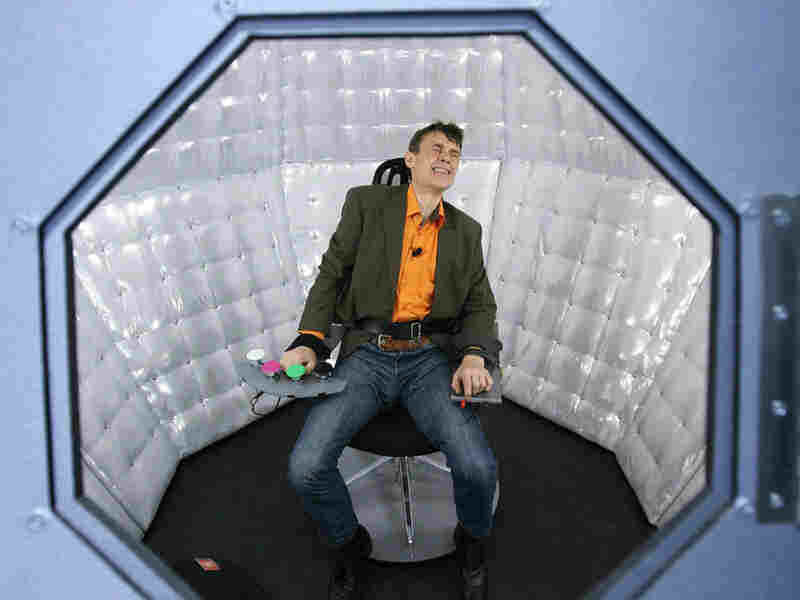 The documentary Game of Death, broadcast Wednesday in France, shows participants in a game show obeying orders to deliver increasingly powerful electric shocks to a man until he appears to die. The reality show was actually a fiction and the man an actor (Laurent Le Doyen), but the contestants and audience didn't know. Christophe Russeil/HO/AP via FRANCE 2 hide caption 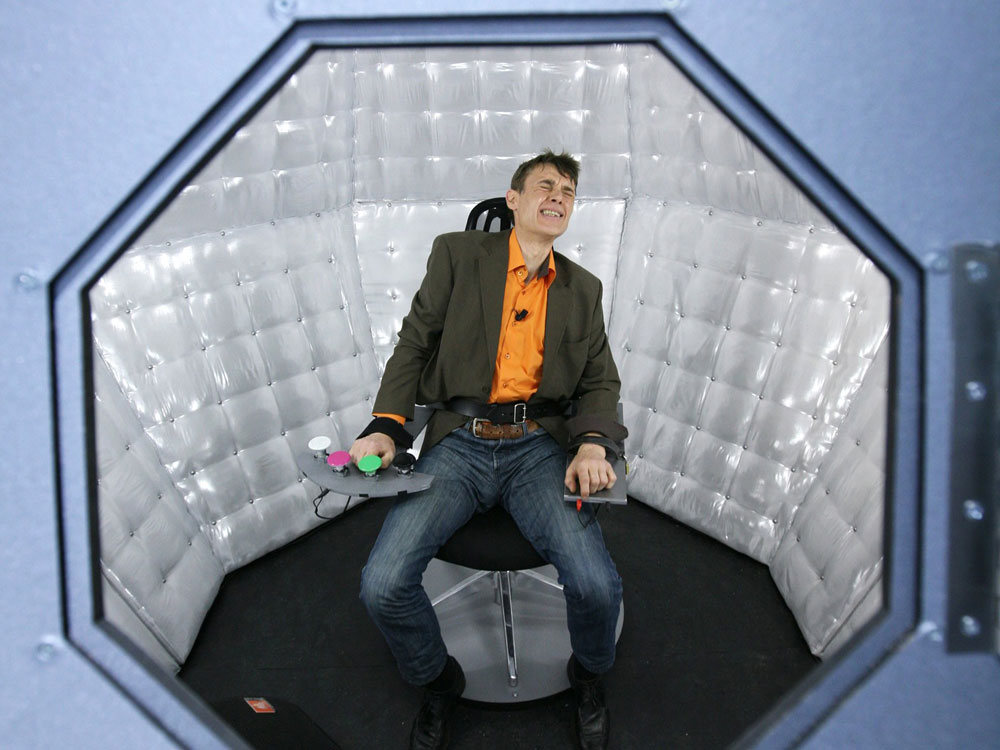 The documentary Game of Death, broadcast Wednesday in France, shows participants in a game show obeying orders to deliver increasingly powerful electric shocks to a man until he appears to die. The reality show was actually a fiction and the man an actor (Laurent Le Doyen), but the contestants and audience didn't know.

Christophe Russeil/HO/AP via FRANCE 2
Video: More About 'The Game Of Death'

France is reeling from a documentary about a psychological experiment disguised as a game show. Researchers staged a fictitious reality show to see how far people would go in obeying authority, especially if television reinforces that authority.

The disturbing results have alarmed the French.

The fictitious game show had all the trappings of a real TV quiz show, including a beautiful and well-known hostess, and a raucous audience. A group of contestants posed questions to a man sitting inside a box in front of them in an electric chair.

The hostess and a chanting audience urged the players — who had levers in front of them — to send jolts of electricity into the man in the box when he gave an incorrect answer.

Even when the player screamed out in pain for them to stop, 80 percent of the contestants kept zapping him. In reality, the man in the electric chair was an actor who wasn't really being shocked — but the players and the audience did not know that.

The documentary makers say reality television relies increasingly on violent, humiliating and cruel acts to boost ratings. They say they simply wanted to see if we would go so far as to kill someone for entertainment.

Christophe Nick produced the documentary, The Game of Death, with a group of scientists and researchers.

"Most of us think we have free thinking and so we are responsible for our acts," Nick says. "This experience shows that in certain circumstances, a power — the TV in this case — is able to make you do something you don't want to do."

The idea that something deeply rooted in the human psyche makes most of us unable to resist authority is not new. The French documentary was based on an American experiment carried out in the 1960s by psychologist Stanley Milgram.

Milgram had participants delivering what they believed were electric shocks to a man every time he answered a question incorrectly. In that experiment, 60 percent of participants obeyed the sadistic orders until the end.

The French documentary, which was broadcast in France on Wednesday night, included footage of the Milgram experiment.

Sociologist Jean Claude Kaufmann says the French version combines Milgram's use of authority with the power of live television. He says the result in the French experiment — a higher percentage of participants willing to shock the subject — shows that the manipulative power of television further increases people's willingness to obey.

Television talk shows ruminated over the documentary Thursday. Comparisons are being drawn to the manipulation of the masses in Nazi Germany. One of the game show participants, Jerome Pasanau, said in an interview that he was still haunted by the experience.

"I wanted to stop the whole time, but I just couldn't. I didn't have the will to do it. And that goes against my nature," he said. "I haven't really figured out why I did it."

Pasanau told the TV host that he felt intimidated and isolated on the fictitious game show set, and that the crowd was overbearing. The host countered by pulling up footage of Pasanau pumping 460 volts of electricity until the actor pretending to be electrocuted seems to keel over dead.

In the footage, the game show hostess yells: "And you've won!"