Accessibility links
Is Your Office Pool Legal? Each year, millions of college basketball fans watch March Madness play out. Not only do they watch, they participate by making a friendly wager in the office pool. But there may be legal ramifications. 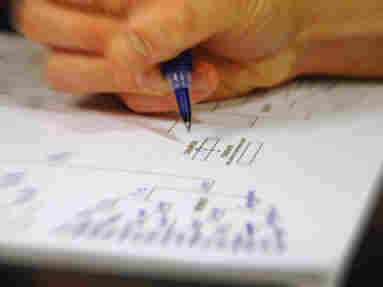 There are many federal government agencies, as well as state and local governments, that ban workplace gambling of any kind. Joel Johndro/iStockphoto.com hide caption

With March Madness starting today, millions are expected to watch over the next few weeks as 64 teams vie for the NCAA Men's College Basketball Championship. But they're not just doing it for the love of the game — many also have a vested interest: They're part of the office pool.

But can you legally bet in your office?

Depends On Who, What And Where

If you think you can't get in trouble after filling out your college basketball brackets, you're wrong.

If it's an office pool, you have to check if there's a companywide ban on gambling. There are many federal government agencies, as well as state and local governments, that ban workplace gambling of any kind.

Then there are the legal ramifications.

"The legality of NCAA bracket contests in offices is really dependent upon state law," says Anthony N. Cabot, who has been practicing gaming law for 30 years.

Cabot says he thinks most of the run-of-the-mill pools are perfectly OK if it's "a casual bet between people and no one is making a profit."

But if you're running the office pool and making money off the bracket, then that's another thing.

"You're almost certainly violating the law then," says Cabot, who has Kansas going all the way in his nonmonetary brackets. "Virtually every state prohibits someone from conducting these types of gambling activities where they're receiving profits for operating the gambling activity."

And the bigger the scale, the more problematic it is — especially if it's across state lines or using the mail.

Cook County (Ill.) Sheriff Tom Dart, known for his aggressive prosecution of vice crime like Internet prostitution, says that unless your office pool is tied to organized crime, it's not likely to draw the attention of law enforcement.

"In the area of vice, we are so busy I'd have to have my head examined if I were chasing around office pools," Dart says. He adds that he's not participating in an office pool, but only because there are no Illinois teams in the tournament.

Dart — as well as a half-dozen lawyers — had one warning: You must claim your winnings on your federal income tax.

He adds, "If you do hit it big, and you walk away with a lot of money, and you happen to get audited, and it turns out you never declared it as income, that's a problem."