Warning: getimagesize(https://media.npr.org/books/summer/2007/member_stations/jaker/alysa200-0e4438d3b75eb9ba1d84e2a6fd02821bbd768b39.jpg): failed to open stream: HTTP request failed! HTTP/1.0 404 Not Found in /var/www/html/src/Views/CommonJsonldView.php on line 87
 Excerpt: 'Alysa of the Fields' : NPR
Accessibility links
Excerpt: 'Alysa of the Fields' Alysa of the Field begins a science fiction/fantasy series that takes place on the fictional planet Xunar-kun. Although intended for young readers, WSKG's Bill Jaker says it appeals to all ages.

Excerpt: 'Alysa of the Fields'

Excerpt: 'Alysa of the Fields'

Bill Jaker Reads from 'Alysa of the Fields' 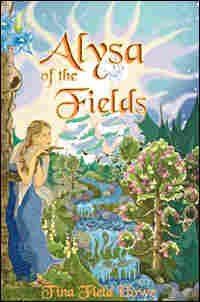 Alysa of the Fields

Find more recommendations from Bill Jaker, host of WSKG's Off the Page.

Drops of dew slipped from tips of leaves and dripped through branches. Their sporadic pat-patter-pat broke the quiet of dawn at the Tradeground. Far below in the gorge, the silent stream rushed over rocks, high with melting run-off from Winding Mountains. A plateau of mist hid the lower reaches of the mountains.

Several paces from the Tradeground a wide, ancient bridge spanned the gorge. Some of its rusty metal girders had fallen away or lay against each other at odd angles. Sections of the floor had given out, and through these openings the stream could be seen. Many very coarse, dark vines were wound around the girders. Some held tight to fallen pieces of the structure and suspended them beneath the bridge. The Folk never crossed the bridge—or the stream at any point—which led into Trailmen territory.

Boshe dismissed the bearers, who made haste back down Gorge Path. In silence, he, Panli and Alysa organized many baskets containing the tradegoods beneath a large canopy. The baskets were of three kinds. The first was made of loose-woven splints that held cloth and other lightweight articles. The second was a tight-coiled, insect-resistant grass basket containing meal, dried vegetables, fruits, nuts and small bags of cheese. And the third was a heavier woven type of basket that held root vegetables, pottery, lamp oil, boots, rugs and other heavy, bulky items.

The Folk Traders left the canopy and laid out three thick mats. Boshe sat in the middle and Panli to his left. Boshe directed Alysa to sit on his right. She sat down cross-legged, as did the men, and tucked the edge of her long skirt under her legs.

As they awaited the Trailmen, she smiled to herself as she realized, I'm sitting next to the exact spot where Father used to sit! She closed her eyes and felt that, for a moment, he was sitting beside her. She sensed something—a warm feeling that rose up in her when she was around people she loved. She tried to define what she was feeling. Could it be that she sensed—her father's presence?

She opened her eyes and to the side of her vision she almost thought she saw him, instead of Boshe, grinning at her! No matter that he wasn't. She closed her eyes again and smiled, relishing the illusion, allowing it to linger.

Alysa startled from her thoughts.

He pointed across the gorge. The Folk drew deep breaths in anticipation and sat up alert, watching. A line of figures appeared along the rim of the gorge. Men and younglings of various ages bore bundles upon their backs or atop close-shorn heads. They were dressed in green and brown hide tunics and breeches. Some wore bulky fur vests.

Alysa studied them and with surprise whispered, "Boshe, are some of the bearers...girls?"

The Trailmen crossed the old bridge, well aware of the holes in the floor and weaving a path around them. They entered the small clearing that had been the Tradeground for a hundred generations. From this point on, neither Folk nor Trailmen would utter a word.

Trailmen eyes revealed nothing more than mild curiosity when they rested on Alysa's seated form.

Panli and Boshe had prepared Alysa as to Trailmen appearance and mannerisms. But one thing she did not expect to witness was the grace and silence with which these people trod. She marveled at how, even though last leaffall's litter was thick on the ground and fallen twigs were scattered everywhere, it seemed that each booted foot was set down without disturbing a single leaf. Although scores of feet passed over them, each leaf seemed to remain as it had fallen, each twig unbroken. Even the delicate red-capped fungi poking up through the leaves went unscathed as they passed.

The bearers set down many bundles opposite the Folk goods. The Trailmen Traders organized their goods as their bearers re-crossed the bridge and melted into the trees.

To Alysa, the Trailmen did not look, at this first meeting, much different than her own people, other than in their style of hair and clothing. But they did appear to be thinner and stronger than most Folk. Their faces lacked expression. Teachers Boshe and Panli taught her that this was a Trade technique which would take time for her to master. But their faces were not harsh or mean as she always imagined. They were every bit as comely as were her people.

Her stomach tightened. Her breath became shallow, and she noticed that her hands were shaking; but she could not tell whether this was due to anticipation or anxiety. She laid her hands in her lap in an effort to conceal this.

The Trailmen unrolled fur mats and spread them on the ground barely two paces opposite the Folk. They settled on their mats, the eldest in the center facing Boshe.

Alysa noticed the bright tattooed patterns that started on the tops of their ears and spread down the backs of their necks. Alysa thought, So this is what has earned them the name 'Painted Ones'! The paintings were striking. The designs were different on each of the three men. Some of the paintings looked like animals, others like scenery, and some appeared to be symbols of some sort. She wondered what they meant.

Excerpted from Alysa of the Fields with the permission of Tina Field Howe.

Alysa of the Fields

Book One in the Tellings of Xunar-kun