Accessibility links
Making a Mark with Rockets and Roadsters Self-made entrepreneur Elon Musk thinks outside the box when trying to make smart investments. Venturing into the world of $100,000 electric sports cars and rocket orbiters, Musk puts a different spin on the art of saving the world.

Listen
Making a Mark with Rockets and Roadsters 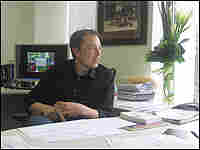 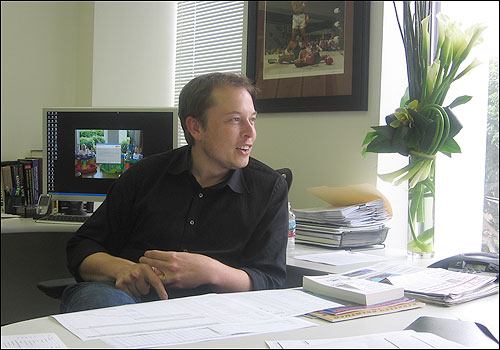 Elon Musk in his El Segundo, Calif., office. Before producing electric cars and starting a rocket company, Musk made his mark in Silicon Valley by helping build the online payment system, PayPal.

Musk's friend Christine Nicholson speaks on her first impression of the entrepreneur and his ideas for making more time to work.

You can also get Musk's take on why Nietzsche is just plain boring.

Musk on His Favorite Books 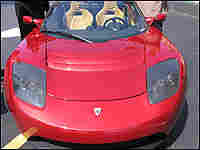 Celebrities and business tycoons are in line to buy the $100,000 Tesla Roadster. The electric sports car runs on about 7,000 batteries and can go from 0 to 60 mph in four seconds. David Kestenbaum, NPR hide caption 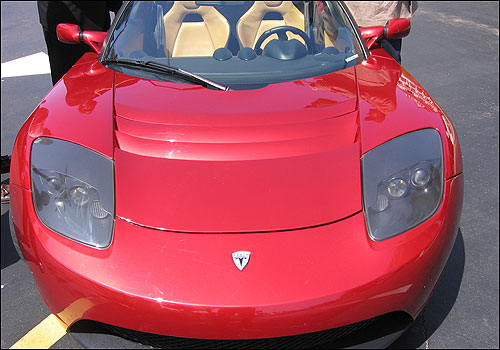 Celebrities and business tycoons are in line to buy the $100,000 Tesla Roadster. The electric sports car runs on about 7,000 batteries and can go from 0 to 60 mph in four seconds. 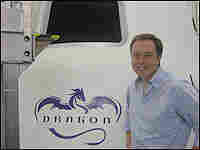 Musk stands by a "Dragon" capsule. He hopes to one day be able to carry seven people to orbit. David Kestenbaum, NPR hide caption 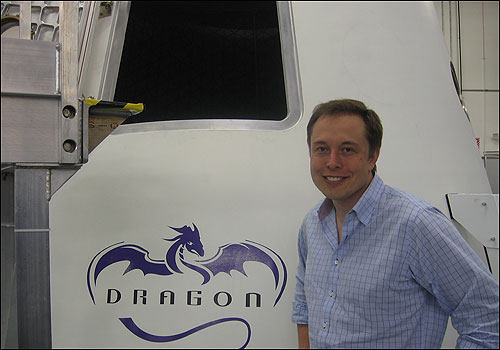 Musk stands by a "Dragon" capsule. He hopes to one day be able to carry seven people to orbit.

What went wrong with the second launch attempt of Falcon 1? Find out more about Musk's goal of reducing the cost of getting to space and see the March 2007 launch.

Also, read more about NASA's plan to use start-up companies to transport cargo into space.

And not just to make money.

Back when he was in college, Musk laid out what he deemed were two important problems worthy of study. First, the world needed an environmentally clean method of transportation. And, he thought, it would be good if humans could colonize another planet. Not an unusual late-night conversation for a science major.

What is different is that now Musk, at 36, has hundreds of millions of dollars — and he's trying to make both ideas a reality.

Musk has not experienced a lot of failure. His first Internet company, Zip2 — which he built from scratch — sold for more than $300 million. Then he helped build up PayPal, which sold for $1.5 billion.

I meet Musk by arrangement in the lobby of a San Diego hotel. The first things out of his mouth are "Hi" and "Have you seen the car yet?"

Waiting does not seem to come naturally to him, and I have to catch up outside where Musk is standing by a red sports car with a small metallic "T" on the front of the hood. He goes over the car in technical detail in a way that is reminiscent of those scenes in James Bond movies where "Q" explains the latest gadget. Finally we get in and he turns the key. There is no sound, but the car moves.

The Tesla Roadster has no tailpipe and no gas tank. It is powered by 7,000 lipstick-size lithium ion batteries, the sort that powers some laptops.

The cost in electricity to drive a mile? One or two cents, Musk says.

Musk pulls the car onto a straight section of road and presses the pedal that has nothing to do with gas. The acceleration throws my head back. I'm startled and Musk is pleased.

In tests, the Roadster has gone from 0 to 60 mph in under four seconds. Musk slows when we get to 100 mph.

"I probably shouldn't go any faster than that," he says. This car is a prototype, and makes some odd sounds. Production versions are due out later this summer.

A Vision of the Future

Musk is charming and funny, but also relentlessly logical. He has a way of talking that makes his vision of the future seem inevitable.

Take electric cars. Some car companies are studying the idea of vehicles that run on hydrogen — Musk thinks that's stupid.

He points out that there is currently no capacity for making huge amounts of hydrogen, no infrastructure for shipping it and no easy way to store it densely enough to drive great distances.

But electricity? We make it, we distribute it and you can charge a Roadster in a few hours from the outlet that powers your washing machine. Tesla says a full charge can carry you more than 200 miles. The catch is that then, your car will need some alone time with a power cord again.

When the folks behind Tesla Motors approached him, Musk quickly invested $37 million, enough to get the company off the ground. He intends to make the money back, and then some.

"I am not Mother Theresa," he has said.

The Tesla business plan is to start at the high-end, establish electric cars as more than golf-carts, then move down market. At about $100,000 the Roadster is beyond the economic means of even most car enthusiasts, though an impressive list of people have pre-paid for the first round.

It's not an impressively long list — just impressive. Musk ticks off names that include George Clooney, the founders of Google and Flea from the Red Hot Chili Peppers.

On the way to the airport Musk speaks on his cell phone with Jay Leno, which puts Musk — a multimillionaire — in the odd spot of being a car salesman. Musk tells Leno that ideally, Tesla will be a great American car company, like Ford or GM, though his voice gets quiet when he says this.

Man with a Plan

Musk was born in South Africa in what he describes as a pretty wealthy household. His father was an engineer and Musk says he did well in the subjects he cared about — physics and computer science.

He says he read constantly, first science-fiction and the Lord of the Rings. In his teen years, he also read the great philosophers – Nietzsche and Schopenhauer — but was not impressed.

"Most of the philosophers, really they're awful," Musk says. "So depressing. Some of the things they say are good ideas, but it's interspersed with so much rubbish."

"I was trying to figure out the meaning of the universe and all that," he laughs. "I came to the conclusion that nobody has any idea."

This seems classic Elon Musk. He gets interested in something ("What's the meaning of life?"), then reads books and finds out everything he can, and discards the accepted wisdom if it doesn't make sense to him.

Musk, by the way, names Douglas Adams as one of the great modern philosophers. Adams wrote the Hitchhiker's Guide to the Galaxy books.

"Douglas Adams is awesome," he says.

Musk eventually went to Canada, then to the United States for school. He says his parents didn't want him to leave and gave him no financial support. He studied physics and business at the University of Pennsylvania, then went to Stanford for a graduate program in physics where he planned to work on energy storage capacitors that could be used in electric cars.

But these were the days of Internet startups and Musk quickly left to start his own. He rented a small office, slept on a futon that became the couch during the day, and showered at the YMCA. His Internet connection came courtesy of the startup in the office below. Musk drilled a hole through the floor to make the connection.

Musk's explanation of why he got into the rocket business begins four billion years ago.

"If you look at the history of life itself, the big milestones, you could say, are the advent of single-celled life of course, the advent of multi-cellular life, development of a skeleton," he says. "You know, there's maybe 10 or 12 on that scale. And on that scale the extension of life to another planet would also fit."

Musk felt like this wasn't going to happen unless the cost of putting something in orbit came down dramatically.

Currently, sending something up into space costs about $10,000 per pound. Musk would like to bring it down to $1000, or even lower. He says $100 per pound is possible.

In 2002, Musk started Space Exploration Technologies (SpaceX). He hired engineers from Boeing, TRW, Lockheed, and the U.S. Air Force. He couldn't lure a chief engineer, so the person doing that job is him.

"I know more about rockets than anyone at the company by a pretty significant margin," he says. "The Falcon 1 — I could redraw substantial portions from memory without the blueprints."

Musk says he has put $100 million of his own funds into the project. SpaceX has customers for 11 upcoming launches and a contract with NASA which is hoping that a startup like SpaceX will be able to one day take astronauts to the Space Station.

But at the SpaceX offices there is a reminder that failure is always an option. SpaceX has tried two launches and neither made it to orbit.

In a cubicle next to Musk's there are mangled rocket pieces from the first attempt.

"This is the baddie," says Gwynne Shotwell, vice president of business development picking up a nut. "You can see the corrosion. Obviously it's worse now because it was submerged in the ocean."

Shotwell says the rocket had been on the launch pad for a while, causing some parts to corrode. As it left the ground, some of the liquid propellant squirted out and caught fire. The rocket crashed into the ocean.

The second launch attempt made it up into space, but the rocket's second stage shut down early.

"We need to get to an orbit, a stable orbit on the next flight," Shotwell says. "We will survive if we don't, but it will be difficult to acquire customers at that point."

SpaceX's offices have a dot-com startup feel to them. There are refrigerators with free drinks, and boxes overflowing with snacks. Another perk: rides on the "vomit comet" – an airplane that gives passengers short periods of weightlessness.

At a NASA facility there would be a public-relations person tagging along during a reporter visit — no such thing here. I only realized the actual rockets were in the basement when I went in search of a cup of coffee.

And when I asked to talk to Musk's wife, Justine, that was fine, too.

Justine said that, though he carries it well, work can be pretty stressful for Musk. He has hundreds of people following him on these dreams, and the projects take constant attention to keep them from going off the rails.

She says her husband is not the sort to give up on things. When they met in college, he asked her out for ice cream. She had to study, but he searched the campus for her and showed up with two cones, ice cream dripping down onto his hands.

"That was Elon at 19 with just this single-minded persistence," Justine says. "And for a long time, that was kind of what our pseudo-dating life was like. He would ask me out, and I would say no for one reason or another, and it really didn't make any difference!"

"Who did I think I was marrying?" she says. "I never thought of him as being a dreamer. Just insanely ambitious."