Accessibility links
Immigration Activists Frustrated By Pace Of Reform President Obama promised to make overhauling immigration laws a top priority in his first year as president, but the odds that it will happen even in his second year seem long. Thousands of activists plan to converge on Washington, D.C., in hopes of prodding him to action. 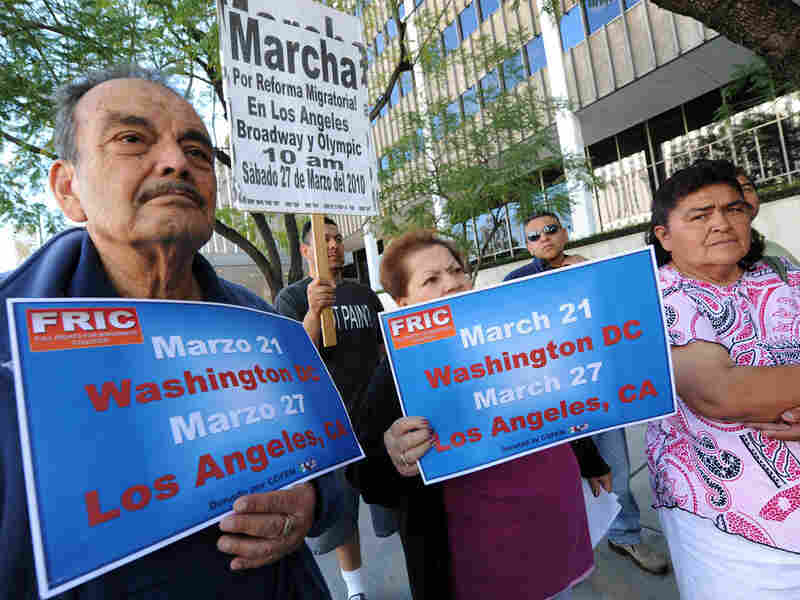 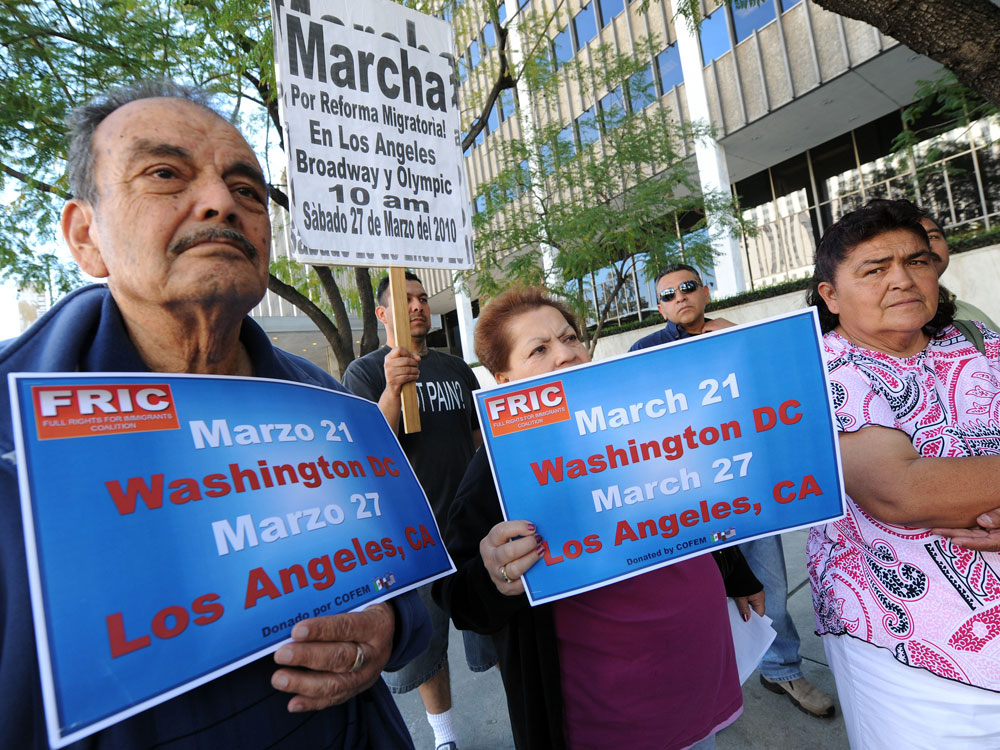 President Obama promised to make overhauling the immigration system a top priority in his first year as president. He's now in Year Two, and the odds that he'll get to sign a bill before the November midterm elections appear long.

Grass-roots activists are frustrated by the wait for a new system. Thousands of people are scheduled to swarm into Washington, D.C., this weekend to rally for an overhaul of immigration laws.

For activists like Alicia Contreras, a student social worker from Arizona, reform means a path to citizenship for the 10 million or so undocumented people living in the United States. She said she works part-time to keep at-risk kids out of gangs and off drugs, and that many of those kids are from illegal-immigrant families.

"I want them to go to college. I want them to work for themselves," Contreras told NPR as she headed to Washington. "And they tell me ... 'You don't live my life. You don't feel what I do. You don't have the world of cannots and do nots.'"

Thousands To Rally For Immigration Overhaul

Thousands To Rally For Immigration Overhaul

Republican state Sen. Russell Pearce defends Arizona's reputation as one of the most unwelcoming spots for undocumented workers in the U.S. He says those headed to the nation's capital are promoting anarchy.

"These folks who march with no respect for the law, have no regard for the victims of crime and the damage and cost to America," Pearce said. "Shame on them. Shame on them! They're as treasonous and as un-American as anyone I know."

For their part, many marchers say they're just trying to reach consensus on this inflammatory issue.

Some who can't make the trip East are trying to reach out in other ways. Jeff Zetino has been working a phone bank to drum up support for a weekend rally in Phoenix to tell state and federal lawmakers that their constituents are ready for change.

"The winds of Washington, they flip on a dime," Zetino told Peter O'Dowd of KJZZ. "I'm not a tea-leaf reader, I'm not a truth sayer. I'm just here doing my work making sure that my efforts are felt."

In meetings last week, Obama sought to assure activists and senators who are drafting a bill of his "unwavering" commitment to comprehensive immigration changes. But that same day, the White House also signaled that the issue is not on its priority list for action before the entire House and one-third of the Senate face voters in November.

Asked about the priorities after health care, White House press secretary Robert Gibbs said financial regulation, energy legislation and watering down a recent Supreme Court ruling on campaign finance are among the "big priorities" — not to mention jobs and the economy.

Gibbs said nothing would happen on immigration without strong bipartisan support. "It's got to be more than the president wants to get something done," he said.

How to handle the millions of people in the U.S. illegally is a volatile issue, with some interests opposing any attempt to help them become citizens and others insisting on stronger border controls first. Lawmakers failed to agree in 2006 and 2007 when they last tried to overhaul the immigration system, and the political climate this year is tougher than it was back then.

Advocates remain hopeful and say Congress has plenty of time to send Obama a bill by November.

Sens. Chuck Schumer (D-NY) and Lindsey Graham (R-SC) released an outline of their bill Thursday, and Obama pledged to get immigration legislation moving through Congress this year.

The outline calls for illegal immigrants who want to get on the path to legal status to admit they broke the law by entering the U.S., pay fines and back taxes and perform community service. They also would be required to pass background checks and be proficient in English before working toward legal residency, required before becoming a citizen.

Obama tapped Homeland Security Secretary Janet Napolitano to oversee the effort, and she has sought support for immigration overhaul in dozens of meetings with lawmakers from both parties.

But those steps haven't eased the anger and disappointment felt by immigration reform advocates and Latinos, who voted heavily for Obama in the 2008 presidential election largely because of his promise.

Obama's position is that the system needs to be fixed to better track who goes in and out of the U.S., crack down on employers that hire undocumented immigrants and help those people come out of the shadows and contribute to society, including paying taxes. He wants them to register, pay a fine, learn English and not skip ahead of anyone already in the citizenship pipeline.

"It will be one of my priorities on my first day [as president] because this is an issue that we have demagogued," candidate Obama told the National Association of Latino Elected Officials in June 2008. "There's been a lot of politics around it, but we haven't been serious about solving the problem. And I want to solve the problem."

"I will make it a top priority in my first year as president," he told the League of United Latin American Citizens the following month.

Five months after taking office, Obama said after meeting at the White House in June 2009 with a bipartisan group of about 30 lawmakers that immigration overhaul would be a difficult undertaking. But he said work on it must get under way that year.

By August 2009, the rhetoric had changed.

Asked about immigration overhaul at a news conference during a visit to Mexico, Obama said changing the system would have to wait until 2010 while he focused on other priorities, such as overhauling the health care and financial regulatory systems.

In appearances after that, Obama promised action but dropped references to any timetable.