Accessibility links
Shake Or Stir, But Please Don't Sweeten A proper martini isn't made with vodka. It isn't green, and its ingredients do not include fruit flavoring or chocolate. For food commentator Bonny Wolf, these points are not insignificant, so Wolf shares her recipe for the perfect martini, a pleasure that needs no sweetening. 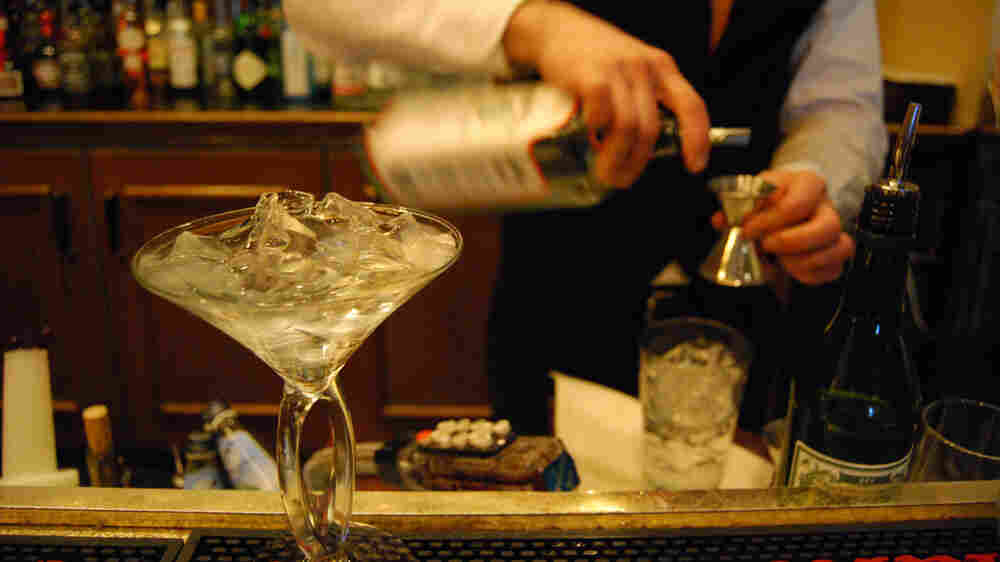 Bonny Wolf's favorite martini in Washington, D.C. is made at the Bombay Club restaurant. Here, Gene Alexeyev chills the glass while measuring the ingredients for a dry martini. May-Ying Lam/NPR hide caption

Can you imagine James Bond asking for a chocolate butterscotch martini? Or an apple martini, lemon drop martini or prickly pear martini?

Unlikely for the suave superspy.

A martini is certainly more than a drink. It's long been an embodiment of style and sophistication — and it's popular again. It's often served with this sort of unorthodox twist.

Putting a drink in a long-stemmed V-shaped glass does not make it a martini. A martini is this: gin and dry vermouth. And maybe an olive or two. Or a twist of lemon peel. It is ice cold and crystal clear, never green or pink. I don't begrudge anyone a chocolate-flavored vodka drink. Just don't call it a martini. 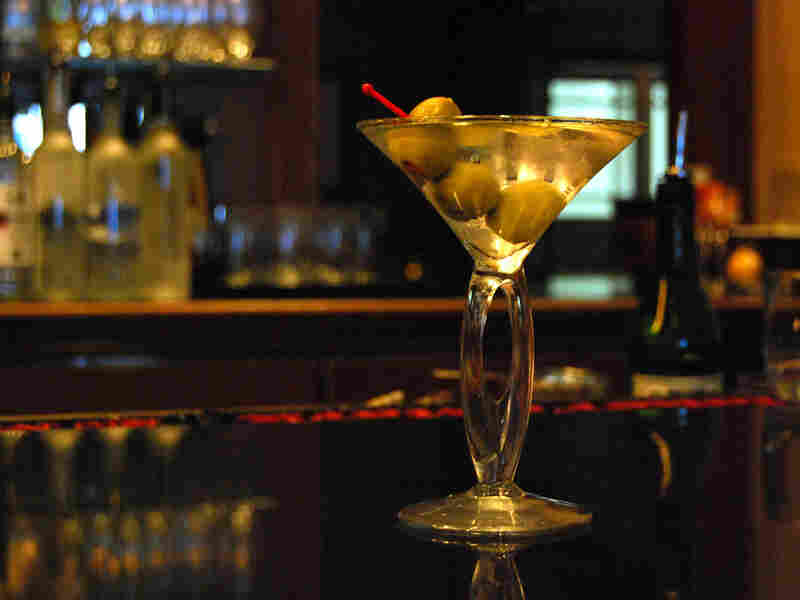 I like a martini with about a 4 to 1/2 ratio of gin to vermouth. I love the sharp juniper flavor of gin. Martini maven Bernard DeVoto wrote that the perfect ratio was 3.7 to one.

Pour gin and vermouth into a shaker filled with ice. Shake for one minute, then strain into a V-shaped cocktail glass. Garnish with olives on a martini pick.

There are several stories about where the martini got its name. They include the claims that it was named for Martini & Rossi vermouth or for the Martini & Henry rifle used by the British army in the late 1800s (both had a strong kick).

I like the story that in 1874, a miner plopped a bag of gold nuggets down on a bar in Martinez, Calif., and asked the bartender to make him something special. The bartender mixed up what he called a Martinez cocktail. The city has put up a brass plaque identifying itself as the birthplace of the martini.

This is a raging controversy among martini drinkers. James Bond insisted on shaken, not stirred. Stirring, he said, bruises the gin. British writer W. Somerset Maugham, on the other hand, said, "Martinis should always be stirred, not shaken, so that the molecules lie sensuously on top of one another."

The Martini, by Barnaby Conrad III, in which many of these facts were found, is a delightful, illustrated history of the martini.

The martini is an icon. H.L. Mencken called it "the only American invention as perfect as the sonnet."

Recipes for the martini appear as early as an 1882 bartender's manual, although in addition to gin and vermouth, that concoction called for sweet syrup. Over the years, the martini got drier and drier. Martinis were popular in Prohibition speak-easies, probably because it was easier to make gin in a bathtub than whisky.

Ever after, the martini was the height of urbanity.

"The martini is a city dweller, a metropolitan," the American writer Bernard DeVoto wrote. "It is not to be drunk beside a mountain stream or anywhere else in the wilds."

Think Katharine Hepburn, Cary Grant and art deco furnishings in wood-paneled bars. The martini was the drink to accompany witty repartee at the Algonquin roundtable. What Fred Astaire — in white tie and tails — drank just before he took Ginger Rogers to the dance floor.

A martini defined cool and modern. The 1950s jazz saxophonist Paul Desmond said he wanted the sound of a dry martini.

The TV show Mad Men is set around the same time Desmond composed the Dave Brubeck Quartet's hit "Take Five." Mad Men is careful with period details and gets the martini-style cool just right. Many of the characters drink martinis at bars, cocktail parties or when they get off the train from Manhattan.

The martini's star faded in the late 1960s and '70s with opposition to expense account dining, health food stores gaining on liquor stores and the popularity of other mind-altering substances.

Classic cocktails made a comeback in the 1980s, but things began to run amok. Frou-frou-tinis featured flavored vodka or fruit purees. Even bacon bits have become common in raucous bars with loud music.

Which is all wrong for the drink that writer E.B. White called the elixir of quietude.