Accessibility links
In Changing China, Being 'Suicided' Or 'Harmonized' It's become fashionable in China to use the passive voice when authorities have done something you don't like. Being "harmonized" is now a common expression that means you've been censored. The play on words by the Chinese is a darkly humorous poke at their situation.

Nowhere is the blistering pace of change in China more obvious than in its language. Chinese, the language with the most native speakers, is constantly coining and importing new terms to describe new ideas and things.

Lately in China, it's become fashionable to use the passive voice when authorities have done something that you don't like. You could call this new grammatical voice the "passive subversive."

1. Suicided: Murdered and made to look like suicide; or forced to commit suicide

4. Invited to Tea: Questioned by police, usually on political matters

For example, if your prison inmates beat you to death, but the police make it look like you killed yourself, then you've been "suicided."

A recent event held by an arm of the Education Ministry made it quasi-official: The Chinese character of the year last year was "bei" (pronounced "bay"). Put "bei" in front of a verb and it indicates the passive voice.

Lei Yi, a historian with the Chinese Academy of Social Sciences, was one of the judges at the event. He says that Internet users nominated and voted for the new word by a landslide.

"We felt we should recognize this result," he said, "so we named 'bei' as the character most representative of China's situation last year."

So, for example, if your school falsely claims you got a job, to bolster its job-placement statistics, you've been "employmented."

The idea here is that somebody has used you to cover up some unpleasant truth. You've been built into a facade in someone's Potemkin village.

Doubleleaf is the online name of a Beijing-based blogger. Early last year, he found that access to his blog, which is hosted on a U.S. server, had been blocked within China, probably because of his political writings.

Being "harmonized" is now a common expression that means you've been censored. Doubleleaf explains that it's a sardonic swipe at the "harmonious society" China's leaders claim they're trying to build.

"The government just covers up all sorts of conflicts, problems and clashes through coercion," he says. "They feel this is very harmonious, but it's really not. It's nothing more than an illusion."

"Because there are more and more people like myself," he says, "the police are forced to refine their methods and at least appear more polite. I think this is an improvement." 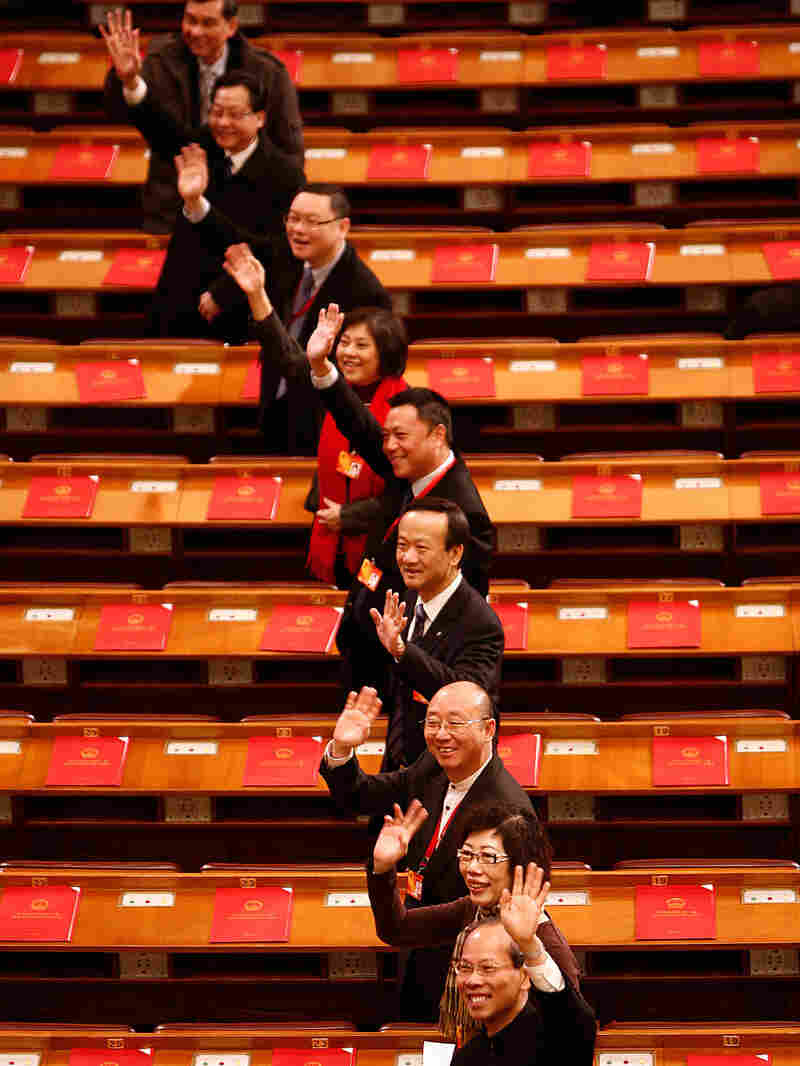 Delegates gesture as they arrive for a session March 14 of the National People's Congress in Beijing. Historian Lei Yi says that when Chinese now say "we've been represented," it means they're aware that they have actually been misrepresented. Andy Wong/AP hide caption

The new, softer tactics, Jiang says, reflect authorities' consciousness of their own diminishing powers — diminished by citizens' increasing access to information and awareness of their legal rights. Authorities also know that they are offending the people they censor or interrogate, and the less power they have, the riskier this becomes.

That's why it's safer to cover their coercion under a layer of deniability — we're just having a cup of tea. But Jiang says he's not always thirsty.

"They don't admit that they're investigating you," he says. "They just say that they're friends and they want to chat. I say that since they're just friends, I can accept their invitation or not. It depends on whether or not I have time."

About this time every year, delegates file into Beijing's Great Hall of the People for the annual session of China's Parliament. They're supposed to be the people's elected representatives, but the people often have no idea who their representatives are.

Historian Lei says that when Chinese now say "we've been represented," it means they're aware that they have actually been misrepresented, without their consent.

"For centuries we've been told that the emperor represented the people's interests," he says, "or that some organization or some leader represented our interests. People did not realize that they had 'been represented.' This word of the year signals the awakening of citizens' consciousness."

So many Chinese have seen through the charades, and they're not as afraid of authority as they used to be. But still there's not much they can do about it, except take a darkly humorous poke at their situation.

Gradually, says Lei, that will change, as increasingly enlightened and empowered Chinese citizens go from passive to active.