Accessibility links
Lunar Rover Is Spotted For First Time In 37 Years Video game developer Richard Garriott bought the broken Soviet lunar rover at an auction in 1993 — this week, thanks to new photos released by NASA, he's been able to see it on the moon for the first time. 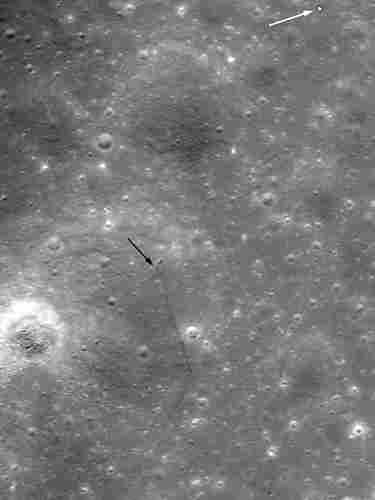 Richard Garriott has many accomplishments to his name — he's a successful video game developer and one of fewer than 10 private citizens to travel into space. Now he even owns property on the moon.

"I am the world's only private owner of an object on a celestial body," he says.

The object he's referring to is the Lunokhod 2 rover. The Lunokhod 2 is a Russian space vehicle that landed on the moon in 1973 — and stopped working that same year. Even though no one knew exactly where the rover was, it went up for sale at a 1993 Sotheby's auction in New York, and Garriott handed over $68,500 for it.

Last Monday, scientists spotted the Lunokhod 2 rover for the first time in 37 years.

"As soon as I saw this new data, I did a recheck of the findings, and there's no question that they have the right target. It's my Lunokhod 2," Garriott says.

Garriott says he's thrilled to finally have photos of his "private flag sitting on the moon."

"My rover has traveled over 40 kilometers. It has tilled the soil or turned the soil with its wheels and it has surveyed land as far as the eye can see — or as far as its cameras can see," he says.

His obsession with space started early. When he was a teenager, long before he made his fortune developing computer games, he dreamt about space. It was in his blood. His father, Owen K. Garriott, was a NASA astronaut who spent over two months in space back in the 1970s. But one day, a doctor told young Garriott that he would not be able to continue his father's legacy; his poor eyesight, the doctor said, would make him ineligible to be a NASA astronaut.

"So as a teenager, I devoted myself to the privatization of space, so that I could find my own way into space," Garriott says.

He succeeded. Back in 2008, Garriott actually went to the International Space Station and became the first second-generation astronaut in history. Now that the exact location of his moon rover has been determined, he's ready to plan another trip.

"When I made this acquisition, I thought the probability of getting the chance to go to the moon and see, first-hand, my rover was as close to zero as would be reasonable to consider," he says. "I actually think the odds are considerably greater than zero now.

"I will hopefully, at least, get to see it from lunar orbit, and perhaps even from the ground."