Accessibility links
Movie Review - 'How To Train a Dragon' - No, Dad: Actually, Dragons Are A Boy's Best Friend By official decree, dragon-killing is the most popular pastime on the Viking island of Berk. But when one local boy ignores everything he's been taught and inadvertently befriends a young fire breather, well — it turns out that's one heartwarming 3-D movie.

No, Actually, Dragons Are A (Viking) Boy's Best Friend

No, Actually, Dragons Are A (Viking) Boy's Best Friend 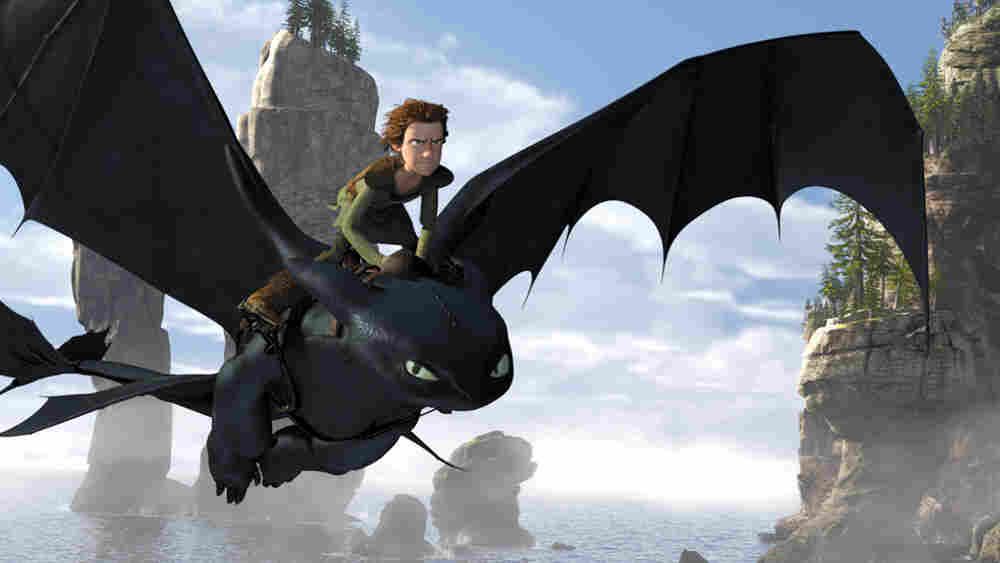 Does This Thing Go Any Higher? Viking kid Hiccup's (Jay Baruchel) world gets turned upside down when he accidentally befriends a fire-breathing dragon — one of the many his fellow villagers are trying to kill off. Paramount hide caption

'Stop Being All Of You'

'Everything I Know Is Wrong'

If your kids still hanker for soaring, swooping, vertigo-inducing 3-D dragon-riding, and you just can't bear the thought of another visit to Pandora, consider a trek to the Viking island of Berk. It's not quite as distant — just off the coast of ancient Scotland, judging from the accents of its inhabitants — and apart from a fire-breathing pest problem, the setting for the animated adventure How to Train Your Dragon would appear to be a lovely away-from-it-all vacation spot: craggy, with a fog-shrouded harbor, plenty of digital sheep dotting the hillsides.

The only drawback is that so many of those sheep get carried off by flying reptiles after the sun goes down. Viking Chief Stoick the Vast (Gerard Butler) has consequently made dragon-killing the town's chief occupation, and the only inhabitant he won't let participate is his scrawny son Hiccup, voiced nasally and with enormous charm by Jay Baruchel.

Naturally, Hiccup is desperate to prove himself, but he's so lacking in the killer instinct that when he semi-accidentally wounds a dragon, his un-Vikinglike impulse is to nurse it back to health. He soon has a big, fire-breathing, fish-eating pet flying him through the night skies so fast no one can see him. Wish fulfillment for any kid, but also a problem: If anyone in Berk finds out, he'll be toast.

Adapted (from Cressida Cowell's children's tales) by Lilo and Stitch creators Dean DeBlois and Chris Sanders, How to Train Your Dragon blends that earlier picture's snarky insouciance with a story that's got some intriguingly reassuring things to say about overcoming physical limitations and becoming your own person. The whole is decked with 3-D trappings that no post-Avatar adventure story can apparently afford to be without: DeBlois and Sanders have plenty of fun with belched-fireball-in-the-face spectacles, and if they let the aerial swooping and soaring go on too long at the film's beast-battling climax, it's undeniably invigorating.

But what gives their story emotional heft has to do with a different kind of dimension: a depth of feeling surrounding the Black Stallion-style bonding of boy and beast. Digital fireworks notwithstanding, in a story about learning to trust, the filmmakers have sensibly decided to trust their narrative; fans of Carroll Ballard's 1979 classic about a boy and his horse will find the mostly wordless getting-acquainted sequences in How to Train Your Dragon startlingly familiar — and captivating in their simplicity.