Accessibility links
More Than 'M*A*S*H': Songwriter Johnny Mandel In June, the Songwriters Hall of Fame will induct the man who wrote the theme for M*A*S*H. At 84, composer and arranger Johnny Mandel has an Oscar and multiple Grammys, as well as credit for arranging Barbra Streisand's latest album. 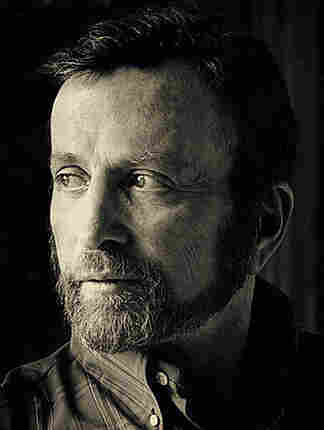 Johnny Mandel, as he appears on the cover of the Johnny Mandel Songbook. He composed the music for popular songs such as "The Shadow of Your Smile" and "Suicide Is Painless." Alfred Publishing hide caption

In June, the Songwriters Hall of Fame will induct the man who wrote the theme for M*A*S*H. At 84, composer and arranger Johnny Mandel has an Oscar and multiple Grammys, as well as credit for the arrangements on Barbra Streisand's latest album.

Mandel's mother was an opera singer. He was just a little boy when she realized that he had a unique musical gift. "Well, when I was 5 or something, she discovered I had perfect pitch," Mandel says. "She'd go play a note and I'd be in the next room or something and I'd call off the note."

Perfect pitch can drive people crazy. Squeaky brakes, ambulance sirens — they all have identifiable notes. Mandel says he pays no attention unless he's asked. At his home in Malibu, he's asked what note the crows outside his window are squawking.

"That was a crow in E-flat. Is this going on NPR? I can't say much for the future of radio if this is what you're giving them," Mandel says, laughing.

Movie director Robert Altman hired Johnny Mandel to score his 1970 satire M*A*S*H. The first scene up was a fake funeral, and Altman needed a song for it.

" 'It should be the stupidest song ever written,' " Mandel recalls Altman saying. "I said, 'Well, I can do stupid.' He says, 'The song should be called 'Suicide Is Painless.' "

Altman took a stab at writing the lyrics, but it just wasn't stupid enough.

"[Altman] said, 'Ah, but all is not lost. I've got a 15-year-old kid who's a gibbering idiot. He's got a guitar. He'll run through this thing like a dose of salts,' " Mandel recalls Altman saying.

Robert Altman later said his son made more than $1 million from the song, whereas he got just $70,000 for directing the movie. Then M*A*S*H became a TV series, now in perpetual reruns.

In addition to the score, the filmmakers wanted a song. Mandel plucked one out of his theme and Paul Francis Webster wrote the lyric. "The Shadow of Your Smile" won the Oscar for Best Song From a Motion Picture in 1965; then, dozens of musicians recorded it.

"You've seen an Oscar," Mandel says, taking it down from a shelf in his Malibu studio. "People have them all over the place. And the sea air isn't too kind to them anyway. You wouldn't believe how heavy these are. I just about dropped it on Natalie Wood's foot when she handed it to me."

First, he wrote arrangements for Krall's jazz quartet: simple, elegant groupings of instruments and notes. Mandel listened over and over to the quartet-only recording, then made an arrangement for orchestra.

"At that point, the idea is to stay out of the singer's way," Mandel says. "When I'm writing for this kind of a situation, I try to put a kind of scrim. You veil things to set off the main attraction rather than competing with it."

The orchestration also is simple and elegant, but fuller. Mandel put in a flute and translucent strings.

"With strings, nice bunch of strings in the back — now Barbra's carrying it," Mandel says while listening to the song "Here's That Rainy Day." "I've been writing vocal arrangements for a long time. The only thing the orchestra should do is provide a lovely cushion for her to sing against."

Mandel studied piano as a kid, but the trumpet and trombone won his heart.

Throughout his long career — as an arranger, composer, record producer and instrumentalist — Mandel has made music that caresses the ear.