Accessibility links
Internet Project Sparks Stunts For Google's Attention Communities across the country are feverishly campaigning for Google to install its super-high-speed Internet cables in their towns. To attract Google's attention, Topeka, Kan., has unofficially changed its name to Google and the mayor of Sarasota, Fla., went for a swim in a shark tank. 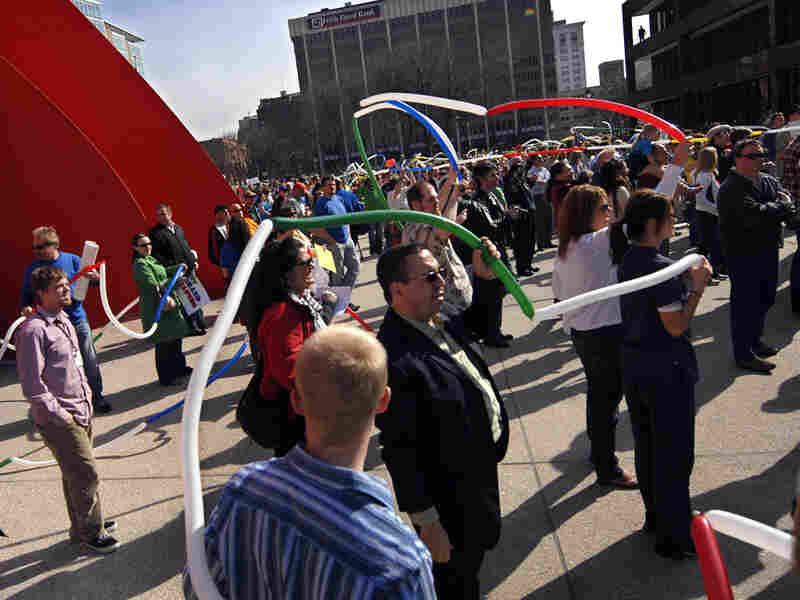 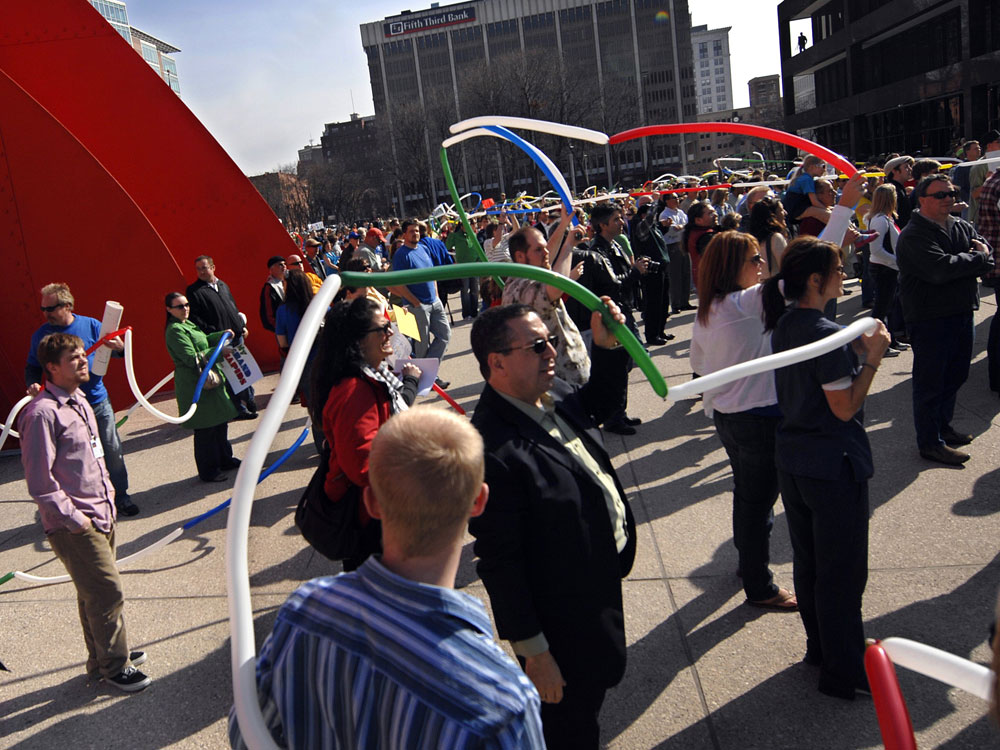 Cities across the country are going gaga for Google — at least for a Google contest.

The Internet search company announced last month that as part of a project called Google Fiber, it will install super-high-speed fiber-optic Internet cables in at least one lucky city.

Google says it can bring the project, which provides Internet speeds up to 100 times faster than what most people have today, to only about half a million homes. The company has asked interested communities to explain why Google should build its network in their towns. And that's set off a feverish competition.

Topeka, Kan., Started It All

The official application process to be considered for Google Fiber is all online, but leaders of Kansas' capital city decided they needed an edge to get Google's attention. So they temporarily and unofficially changed the city's name. Instead of Topeka, it's now Google, Kansas.

The folks in Duluth, Minn., were quick to respond, with a mock press conference posted on YouTube. Duluth Mayor Don Ness even took a February dip in the icy waters of Lake Superior just to get Google's attention.

In response, the mayor of Sarasota, Fla., went for a swim in a shark tank.

Sarasota also recruited Los Angeles singer-songwriter Lindsey Ray to do a jingle. A sample lyric: "There's no limit to all the things that I can do, now that I found you, thank you Google Fiber."

Hundreds of people came, dressed in the bright colors of Google's logo. They unfurled a half-mile-long string of balloons to represent the fiber-optic lines, and they made a lot of noise.

Through all of these stunts — and there are dozens more — people at Google have been paying attention. But that doesn't mean that the city with the best stunt wins.

"We're excited about the grass-roots enthusiasm, but we're going to be evaluating all the applications based on their merit," says Minnie Ingersoll, Google's product manager.

Shaking Up The Market

Google has been a little vague about exactly what does have merit in this competition. But Ingersoll points to a couple criteria: Google wants to be able to install its fiber lines quickly, so infrastructure is important; and Google is looking for a place that can actually use ridiculously fast Internet — and not just for lightning-quick downloads of the latest episode of Lost.

Google isn't inventing any new technology. Fiber-optic Internet is already a staple in many developed countries. But it's been underutilized in the U.S., partly because it's expensive and partly because traditional providers are skeptical that people need the speed.

A faster connection could help Google: More speed allows quicker searches and more ads, after all. And Google might be able to introduce new applications with a faster Internet.

So its goal is to shake up the market.

Analyst Vince Vittore of the Yankee Group says he's not sure that'll happen.

"I think it's just going to be an experiment to see what people do when they get a whole lot of bandwidth into their house," he says.

And Vittore says it'll be a small experiment at that, reaching no more than half a million people.

"And so you have all these cities trying to compete to be that one single, lucky winner. And the fact is, you're going to have a lot of disappointed cities," says Vittore.

But for now, people in hundreds of cities think it's worth the risk. And the reward could be more than blazing-fast Internet. Being picked by Google brings automatic Silicon Valley street cred, which could lead to even more investment from other tech companies.