Accessibility links
Health Vote Provides GOP With Few New Targets Some House Democrats will pay a price for supporting health care legislation. But control of the chamber won't turn on it. 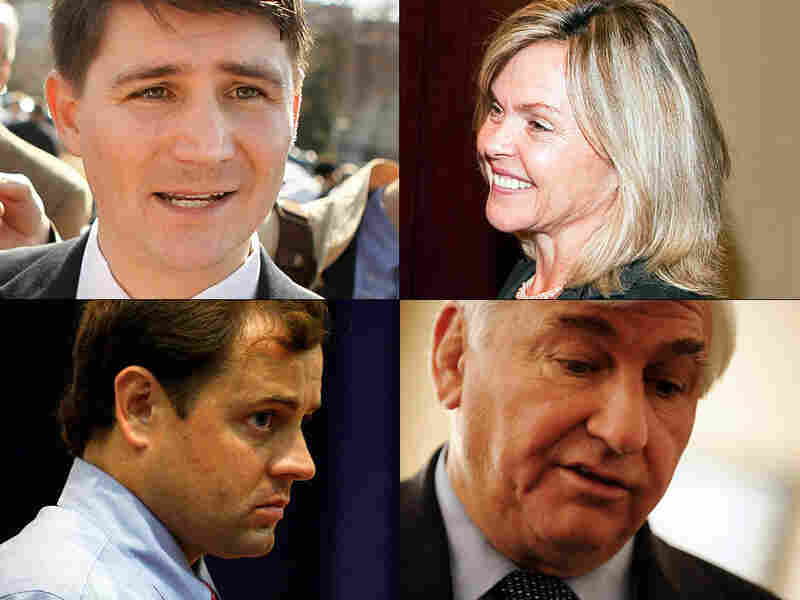 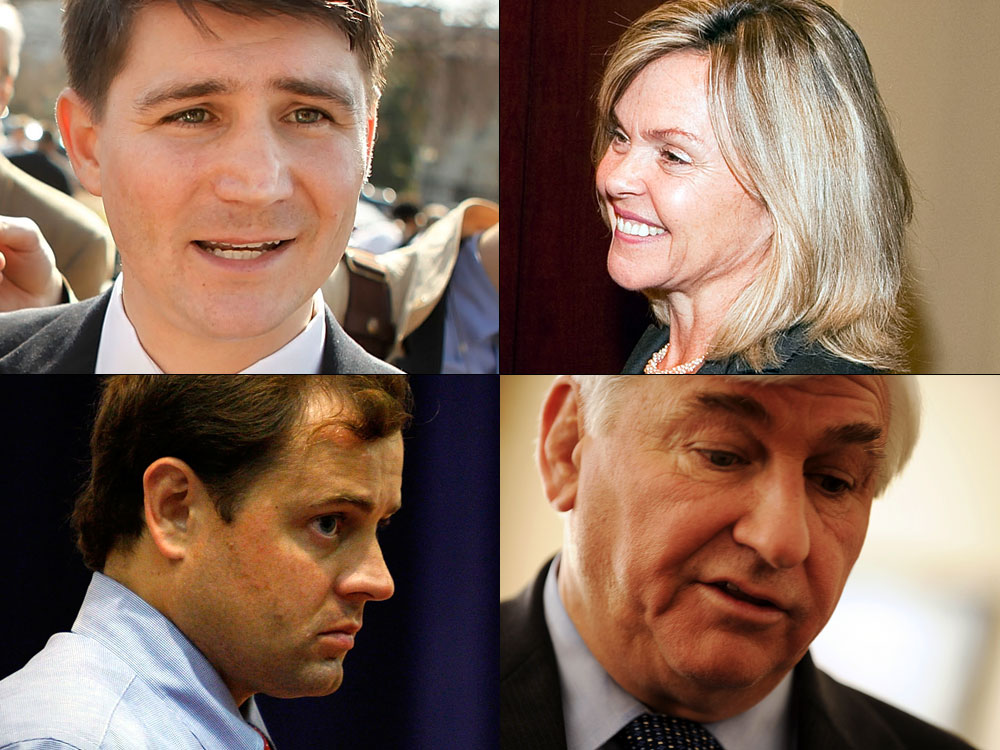 About 40 House Democrats — including (clockwise from left) Ohio Rep. John Boccieri, Colorado Rep. Betsy Markey, Florida Rep. Allen Boyd and Virginia Rep. Tom Perriello — are being targeted by the National Republican Congressional Committee for their support of the health bill.

Republicans despondent over passage of the health care bill are consoling themselves with the prospect that Democrats will pay a price come November. But there's already debate about how high that price will be.

Clearly, some Democrats who supported the bill did so at their own political peril. The National Republican Congressional Committee is targeting some 40 Democrats for their support of the health legislation.

"The fact is that a lot of Democrats took a lot of tough votes Sunday night," says Paul Lindsay, an NRCC spokesman, "and our goal will be to remind them of that for the next seven to eight months."

Democrats were aware of the risks. "A lot of people are telling me this decision could cost me my job," Rep. John Boccieri (D-OH) said at a Friday news conference.

But Boccieri belongs to a subset of Democrats who were already in trouble, regardless of what happened on health care.

Only 14 House members switched their votes from November's vote on health legislation to Sunday's. Three of the 14 have announced they are not running for re-election. All are Democrats except Anh "Joseph" Cao of Louisiana.

From no to yes:

From yes to no:

He is a freshman who, like other members of his class, was helped by a swell in Democratic turnout in 2008 that is almost certain to subside this year. He also represents a traditionally Republican district and was on GOP target lists long before casting his "yes" vote on Sunday.

The Straw And The Camel's Back

Some congressional Democrats have talked openly about the health bill's unpopularity and the fact that it's likely to cost them seats in November. The bill fits in nicely with the GOP's overall line of attack. Republicans criticize Democrats from President Obama on down for being spendthrifts who have expanded the size and reach of government.

The Club for Growth, an anti-tax group based in Washington, has already enticed more than 200 Republican candidates and members of Congress to sign a pledge vowing to repeal the health measure.

The fact that the health care vote, as important as it was, will still take a back seat to the economy may offer only cold comfort to Democratic bill supporters who end up losing. But that's the reality of their present situation.

"Most Democrats are vulnerable not because of the health care reform brouhaha, but because they are in difficult districts and because the current national mood is bad for the incumbent party, due primarily to the economy," says Ruy Teixeira, a political analyst affiliated with the Center for American Progress, a Democratic think tank.

Teixeira and other Democrats, while recognizing the problems health care poses, hope that the issue will not prove a further drag on the party's prospects. Their fondest hope is that its passage will lift enthusiasm among the party's base, which has been notably tepid. And, with the bill about to become law, they hope they can do a better job selling its benefits to a public that has remained notably divided over it.

"When they see, first of all, that the Armageddon described by the Republicans fails to come to pass, but also start to see all of the positive impacts, I think it's going to be a good thing," Tom Perriello, a freshman Democrat from Virginia and prime Republican target, told NPR's Melissa Block on All Things Considered Monday.

Many of the most popular provisions will take effect right away, including more generous Medicare prescription drug benefits for seniors and the requirement that insurers cover dependent children up to age 26. The bill's more onerous provisions, such as tax increases and big cuts in Medicare funding, don't kick in for years.

"This was a law that was unpopular in its totality but popular in lots of its details," says Jacobson, the political scientist at UC San Diego.

Republicans need to win 40 more seats to regain control of the House. Historically, a first-term president's party has almost always lost seats during midterm elections — and enthusiasm among Republicans has been notably stronger this year than among Democrats, which should translate into stronger GOP turnout. But winning that many seats is still a tall order.

Some Republican strategists are claiming that the health vote provides them with enough targets to meet their goal. Bernadette Budde, senior vice president of the Business Industry Political Action Committee, doesn't sound so sure.

BIPAC gives most of its money to Republicans. But Budde says that the political field is still uncertain. Only two states — Illinois and Texas — have held primaries, and the filing deadline has only passed in about half the states.

That means most incumbents can't know for sure who their opponents will be. And that may have affected political calculations about how to vote on health care. Incumbents are made vulnerable by issues and sometimes by their districts, Budde says, but "also because of the nature and quality of the other candidate."

"It's just like filling out the brackets in men's basketball," she says. "You don't know the outcome until you know the matchup."

Despite all the lobbying efforts and aggressive campaigning that countless interest groups have engaged in, few members changed their positions from the House's first health vote in November. Only 14 switched — eight went from no to yes, while six went in the other direction, including one Republican.

Of those vote switchers, only 10 are Democrats seeking re-election — hardly a dent in the 435 House seats up this fall. "If we take that as a reading of incumbents' perception of vulnerability, the lobbying effort and the attendant political things that went with that didn't move very many," Budde says.

Republicans Waiting For A Wave

In other words, if there is going to be a tsunami that not only helps Republicans but carries them back into power on Capitol Hill, the health vote may not be the political earthquake that causes it.

Jacobson doesn't think Republicans can take enough seats to gain a House majority. But, he says, "If the economy isn't better and unemployment is not a little better, all bets may be off."