Accessibility links
Pelosi's Triumph: 'It's Personal For Women' Nancy Pelosi has long been an advocate for children's and women's issues. But those who know the House speaker say her historic success on health care has more to do with her own sharp political skills, and the long-standing aims of her party, than her gender.

Pelosi's Triumph: 'It's Personal For Women'

Pelosi's Triumph: 'It's Personal For Women' 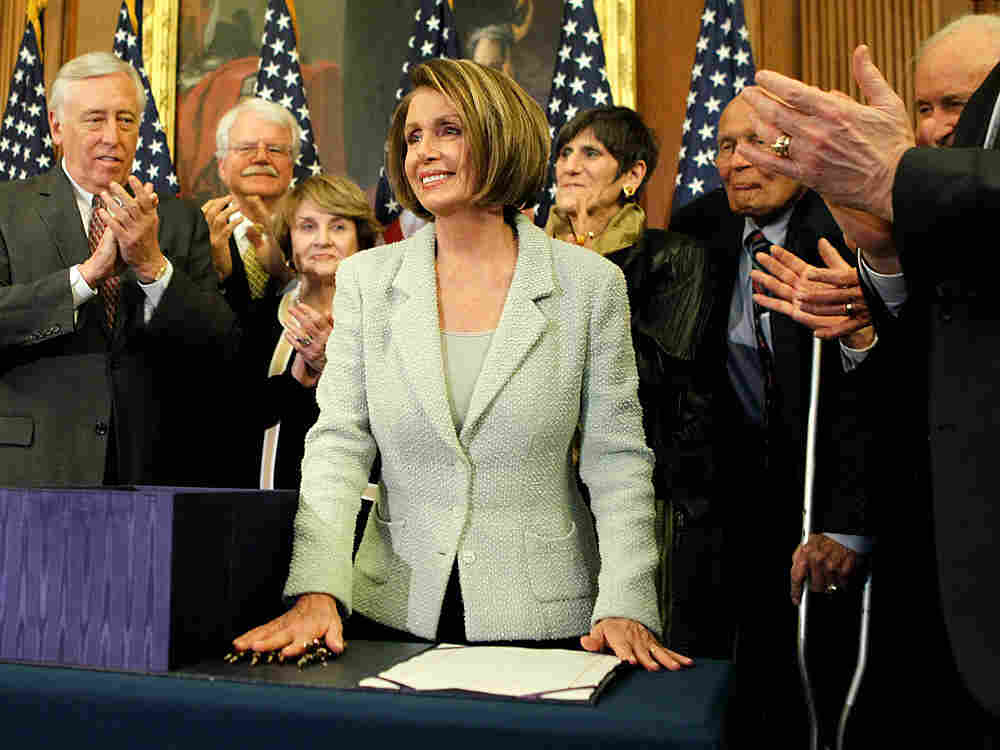 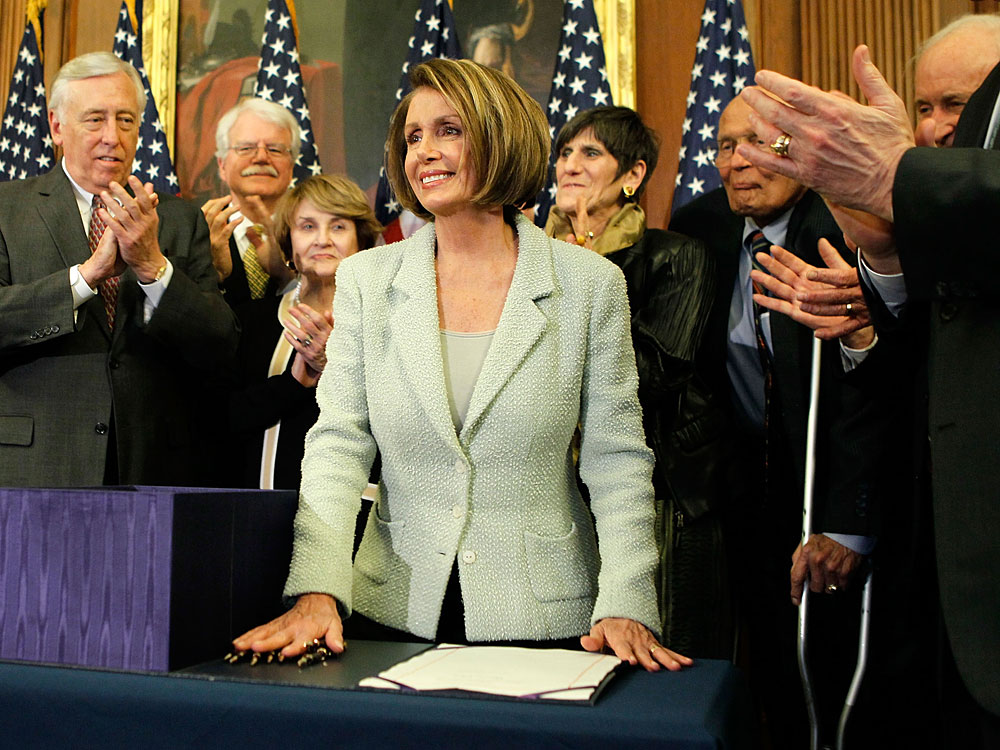 Nancy Pelosi's place in history was secured three years ago when she was elected the first female speaker of the House.

But in corralling her disparate and quarrelsome caucus Sunday night to pass health care overhaul legislation, the Democrat from San Francisco via Baltimore guaranteed that her political legacy would also include a historic legislative win.

As the dust settled Monday and the how-she-did-it stories were being spun, it was not lost that the first major national health care initiative in a generation was cemented by the highest-ranking woman in the history of the U.S. Congress.

"It's personal for women," Pelosi herself said in a closing argument on the House floor Sunday night.

Studies show, after all, that women are disproportionately affected by problems in the health care system and take on the lion's share of health care responsibilities for their families.

To pull together a majority to pass health care legislation, House Speaker Nancy Pelosi and President Obama had to negotiate deals with members of the House Democratic caucus who oppose abortion.

The bill the president plans to sign Tuesday would require that participants who buy coverage through new government exchanges pay a separate fee for abortion coverage. The National Organization for Women calls the requirement "a sweeping anti-abortion provision."

Also on Tuesday, the Senate takes up a reconciliation bill that would make fixes to the new legislation. Those "fixes" include eliminating the so-called Cornhusker Kickback, a provision that gave about $100 million in Medicaid funds to Nebraska.

Republicans are expected to offer up a stream of amendments to the fix-it bill, but Democrats are predicting that the Senate could vote on the legislation by the weekend. House Majority Leader Harry Reid has assured leaders of the House, which approve the fix-it bill Sunday night, that he has the 51 votes needed for passage.

So was the tenacity with which Pelosi, a 69-year-old mother of five, pursued the 216 Democratic votes she needed to move the legislation to the president's desk driven, in part, by her gender?

"Obviously, we know from a variety of studies that women are much more likely to place a priority on health care," says Jennifer Lawless, director of the Women and Politics Institute at American University.

"But this was also President Barack Obama's vision," Lawless says.

Those familiar with Pelosi say that while the speaker has long been an advocate for children's and women's issues, her stick-to-it-ness on health care has more to do with her own sharp political skills, and the long-standing aims of her party, than her gender.

The vote advanced Obama's most important domestic initiative, but it has been received as Pelosi's hard-fought triumph, too. (Just ask the Republican National Committee, which Monday launched a national "fire Pelosi" fundraising effort.)

"This is more about Nancy Pelosi being a phenomenal speaker in that she puts forward bills when she has the votes," Lawless says. "I'm not sure this has anything to do with gender."

Alvin Felzenberg, a political science instructor at the University of Pennsylvania and Johns Hopkins University, is among those who see what he calls an "interesting psychological component" in the question of how much Pelosi's gender informed her pursuit. But he suggests that her round 'em up success has much more to do with a lifetime immersed in rough-and-tumble politics.

"She may be a San Francisco liberal, but she's the daughter of a brass-knuckled mayor of Baltimore who knew how to count," Felzenberg said. With her mother, he says, Pelosi tracked on index cards every favor her father ever bestowed.

The "woman thing" is certainly part of who she is as a politician, Felzenberg says.

"But she's very much schooled in the old clubhouse ways, not the ways of the chi-chi group of left-leaning Democrats," he said. "Underneath all that glitter is a crusty politician."

And, Felzenberg reminds, health care has been an integral element of the Democratic Party's platform since President Franklin Roosevelt.

Pelosi has also mustered the votes to pass other big legislative initiatives this session, including a cap-and-trade energy bill and the stimulus package.

"It's not just health care," says Debbie Walsh, director of the Center for American Women and Politics at Rutgers University. "She's had some other really important victories."

Pelosi's success in keeping health care legislation on life support for months until she rallied her troops is history-making, no matter her own personal context, say experts on women in politics.

"It is an important moment," says Ruth Mandel, director of the Eagleton Institute of Politics at Rutgers. "She has not only demonstrated that she knows how to be an effective legislator, but also a leader." And, Mandel adds, at a time when legislative sausage-making is undertaken in the glare of a 24/7 media world.

In accounts of the weeks that led up to Sunday's vote, and in the wake of the Democrats' loss of the Massachusetts U.S. Senate seat, Pelosi has been credited with pushing Obama and Senate Majority Leader Harry Reid to stick with an omnibus health care bill rather than carve out smaller pieces.

Walsh lauded Pelosi's persistence in keeping her diverse caucus together.

But other women's-rights advocates — including the National Organization for Women — assert that Pelosi gave up too much in her pursuit of a bill.

"I think Speaker Pelosi is a very exciting politician, and I don't know whether her gender affected her path — though everyone's life experience informs their action," says Terry O'Neill, NOW's president.

"But my job is to tell the truth about legislation that is being passed, and this bill, on balance, is worse for women," O'Neill says.

One example: The bill still allows insurance companies to charge women of childbearing years higher premiums, she says. And O'Neill and other advocates object to expanded restrictions on the use of federal funds for abortion.

"It breaks my heart to say this bill is a bad bill from a policy perspective," O'Neill says. "But as a political matter, I'm glad that Barack Obama was not deeply humiliated. I get that."

Madeleine Kunin, who was the first female governor of Vermont, says Pelosi's influence suggests the need to have more women in the political process.

Case in point, Kunin says, was that during Pelosi's fight for votes, the nation's Catholic nuns stood up to the bishops and supported the health care legislation.

"They said, 'We're at the bedside; we know what this means,' " Kunin said.

And while Pelosi's perseverance may be more a function of pure political savvy, she does — perhaps more than many of her male counterparts — know what the health care legislation means for American families.

"I do think that this carries important symbolic benefits to women in the political arena," Lawless says, "in that such a political success is associated with a woman."