Accessibility links
Sean Penn's Latest Role: Haiti Relief Worker For weeks, the Oscar-winning actor has been among the thousands of people living in a crowded tent camp in Port-au-Prince, Haiti. Right now, Penn says, his aid organization's biggest concern is relocating the people in the camp before heavy seasonal rains hit. 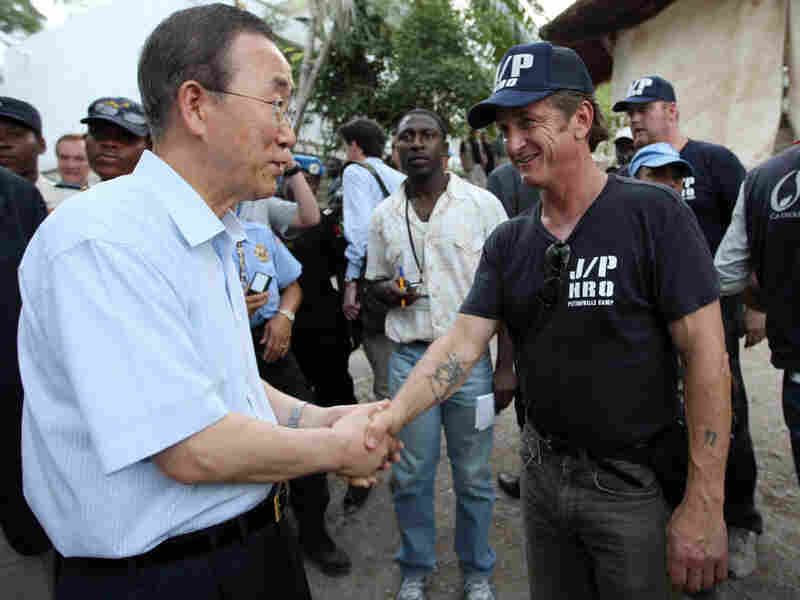 In this image provided by the United Nations Stabilization Mission in Haiti, U.N. Secretary-General Ban Ki-moon greets Sean Penn as he visits a tent camp at the Petionville Club golf course in Port-au-Prince, Haiti, on March 14. Sophia Paris/MINUSTAH via Getty Images hide caption 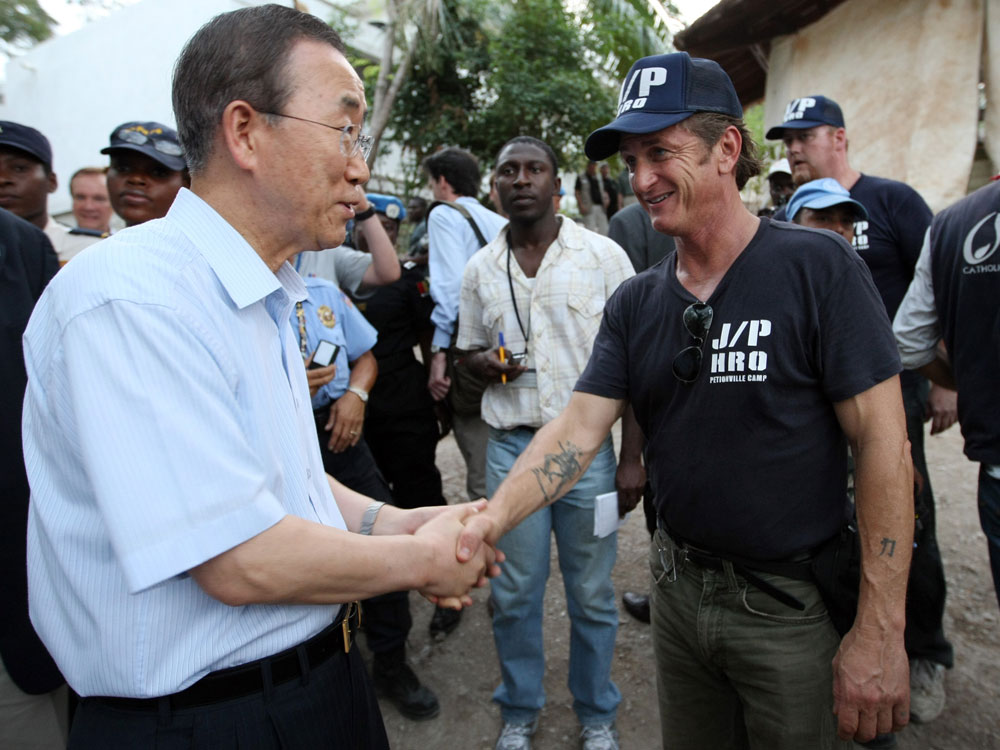 In this image provided by the United Nations Stabilization Mission in Haiti, U.N. Secretary-General Ban Ki-moon greets Sean Penn as he visits a tent camp at the Petionville Club golf course in Port-au-Prince, Haiti, on March 14.

One of the largest tent camps in post-earthquake Haiti has a nickname: "the Sean Penn camp."

One recent day, I found myself in the camp's makeshift hospital, where dozens of doctors were organizing supplies. Sure enough, a few minutes later, Sean Penn walked out.

Penn says he got to Haiti a week after the earthquake and set up a nongovernmental organization. He is sleeping among the 40,000 people in this camp.

"There's not nearly enough tents here for four to six people, families or more," he says. "Not a healthy place for kids to be, and we're going to have incredible problems when the rains come. So we're doing all we can in that effort."

Penn says that when he saw the earthquake, he remembered Hurricane Katrina in New Orleans and how much help was needed then. So this time, he made contact right away with the U.S. Army.

"They needed help and said so, and so we were able to have a great collaboration with them," he says. "It built very quickly when I told a friend of mine who's a businesswoman of our intentions to come down, just a few of us. She then seeded us some initial funds that got us on our feet here ... and so here we are."

The doctors and nurses working in this camp wear T-shirts and hats that bear the acronym of the group Penn and his partner have set up: Jenkins-Penn Haitian Relief Organization.

The camp where Penn is staying is also known as the "golf course camp," because it sits on what used to be the country club.

Right now, Penn says, his biggest concern is relocating the thousands of people who live here before the rains hit.

"These tents will be likely washed away," he says. "The stakes that hold them in are going to be torn up by the water. And before that happens, the water comes straight under the tents immediately, and they become just mud baths."

I asked Penn what he has taken away from his time in Haiti.

"Well, it's exhausting," he laughed. "But I don't know. That's something to be digested later."

As I was leaving, I asked one of the residents of the camp what he thought about Penn. He said he has never seen any of the actor's movies. But he really appreciates all of Penn's help.