Accessibility links
Adventures Of A Snake Milker: This Herd Has Fangs An Alabama man makes his living handling creatures that most people loathe. Ken Darnell is a snake milker. He extracts venom from snakes, freeze-dries it into a powder and sells it to research labS for use in medication. And he loves his job. 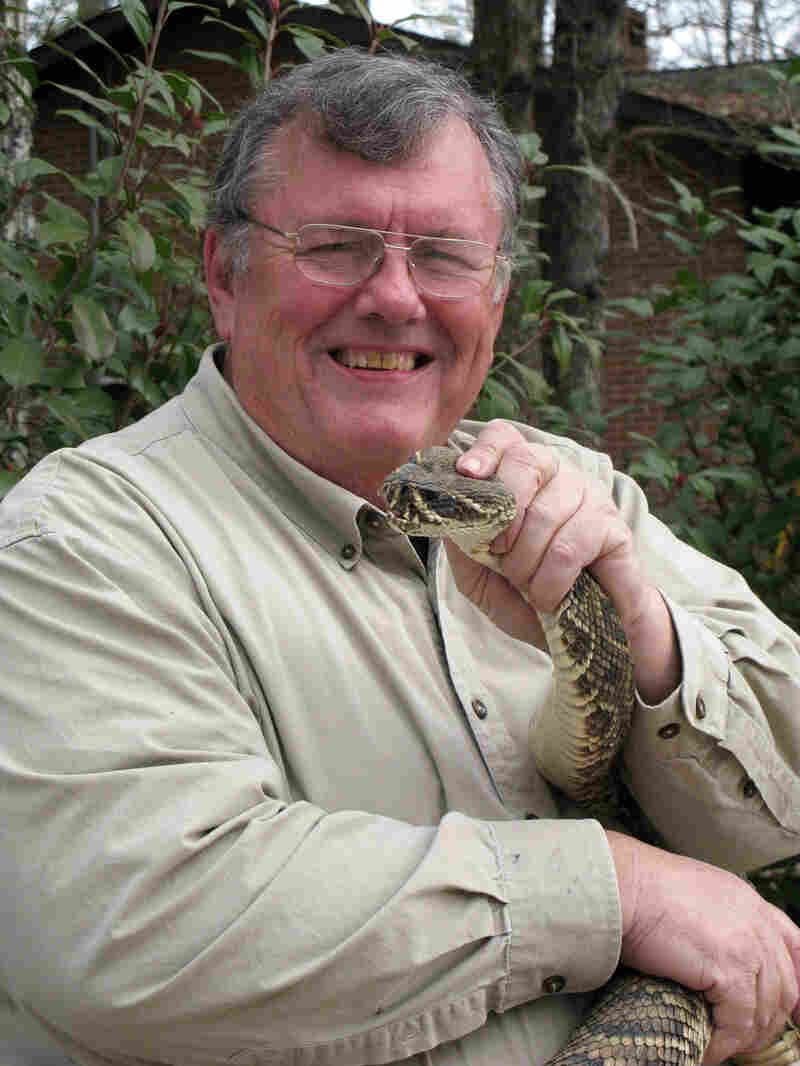 Ken Darnell milks thousands of rattlesnakes every year and sells their venom for use in anti-clotting drugs, blood-pressure medication and antivenin injections. Kathy Lohr/NPR hide caption

Ken Darnell's got a lot in common with dairy farmers, only his herd of 200 is a little different: They all have fangs.

Darnell is a snake milker. His specialty is the Eastern diamondback rattlesnake -- the largest venomous snake in North America.

He lives amid the longleaf pines and scrub brush of southeastern Alabama -- "out in the middle of glorious nowhere," as he puts it -- in an outbuilding that serves as a home for him and for Bioactive Laboratories. One room, which is kept at a steady 78 degrees, contains rows and rows of plastic bins filled with poisonous snakes.

The snakes sleep most of the time and are awakened every few days for milking.

"The only difference between me and any other company in the world that produces something," Darnell says, "is that the means of production here can kill you ... and wants to."

How To Milk A Snake

Darnell has a simple setup. A venom-collecting tube sits in an ice bath. A glass funnel is on top of that. He opens a tub and, using a long-handled hook, picks up a classic black and brown diamond-patterned rattler. Darnell sets the snake on a mat and with the end of the hook, pins down its head -- all without any gloves. 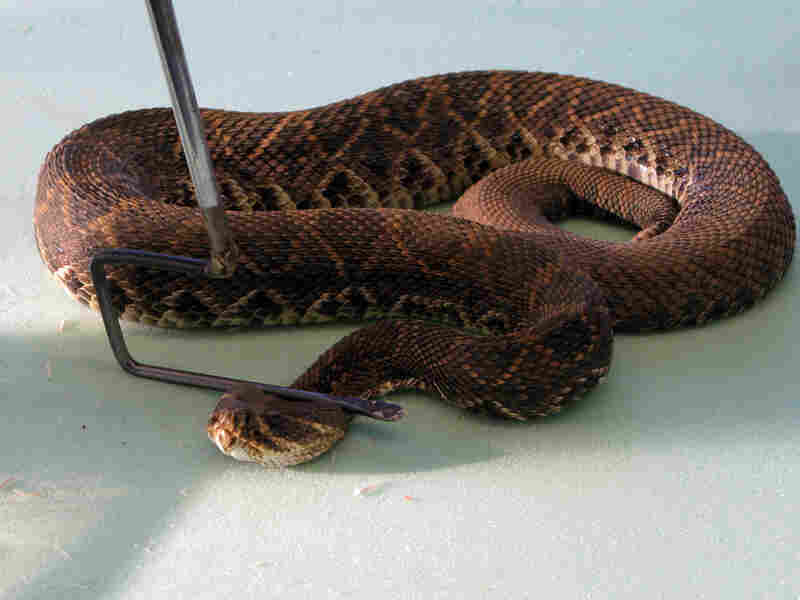 Darnell uses a long-handled hook to pin down a snake before starting the milking process. Kathy Lohr/NPR hide caption 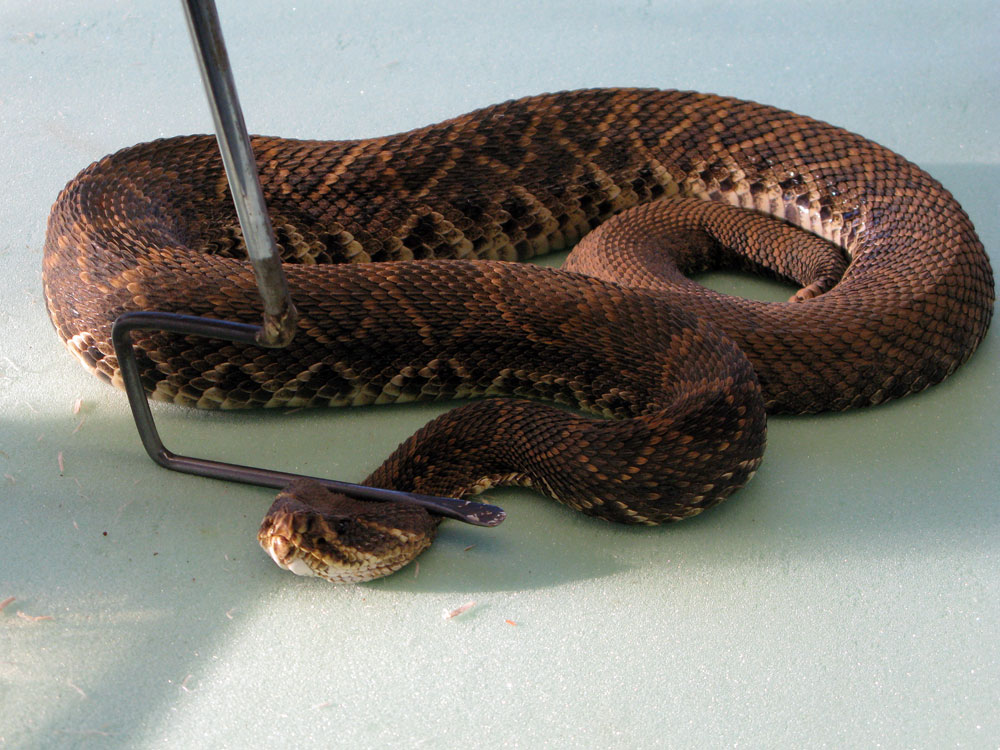 Darnell uses a long-handled hook to pin down a snake before starting the milking process.

"If you use gloves, you wouldn't be able to feel what the snake is doing," he says. "You got to have that contact, so if he moves, you feel it immediately. If he is going to do something, you adjust to it."

Darnell holds the snake's head with a firm hand and presses down on three key points. Then he picks up the rest of the snake, which is 6 feet long and weighs about 8 pounds. Slowly, the very sharp fangs are exposed, and Darnell gently sets the mouth on the side of the glass funnel. 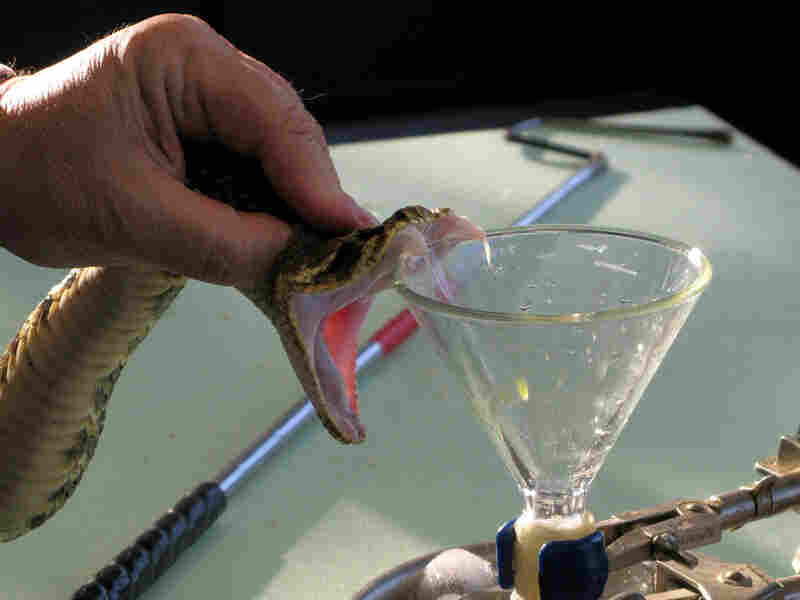 Ken Darnell milks snakes in his Gordon, Ala., lab. The amount of venom he retrieves varies by snake, starting with just a few drops. Kathy Lohr/NPR hide caption 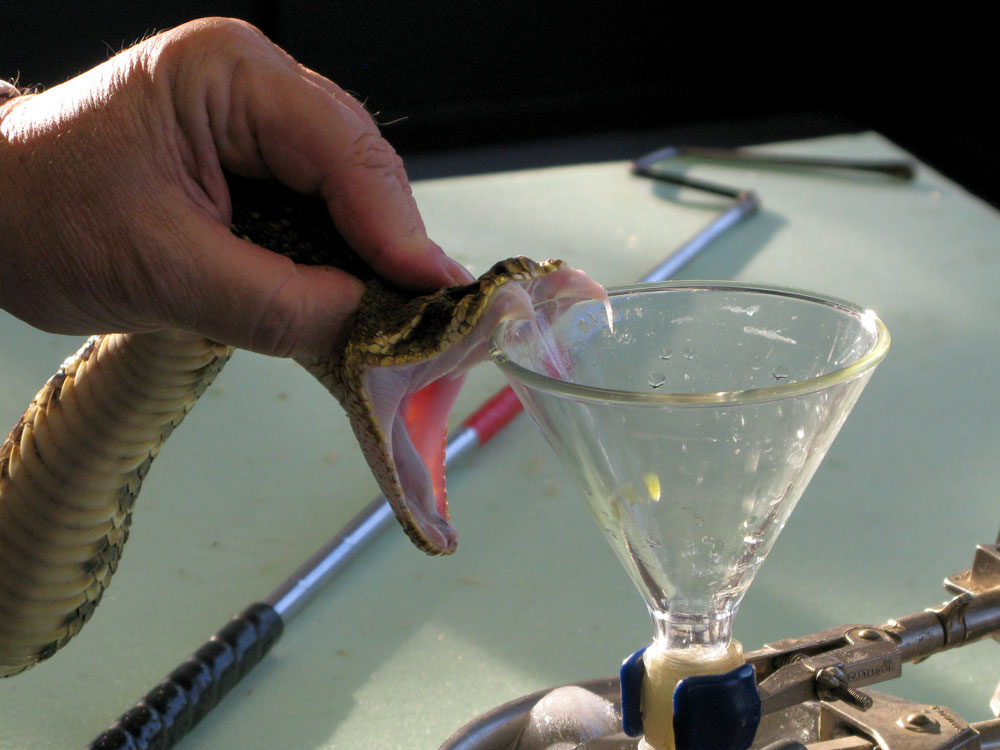 Ken Darnell milks snakes in his Gordon, Ala., lab. The amount of venom he retrieves varies by snake, starting with just a few drops.

"You'd be amazed at how difficult it is for somebody who doesn't know how to do this -- to get his mouth open under the funnel," Darnell says.

He squeezes just enough, and in just the right spots, to allow the venom to run down the fangs and into the collection tube below.

It's a yellowish liquid -- the darker the color, the more potent the venom.

A Job And A Passion

Darnell, who used to work in patent law, says he now spends about 75 percent of his time collecting snake venom.

He milks thousands of snakes -- 200 of his own and hundreds at rattlesnake roundups across the South. Although he doesn't agree with everything that goes on there -- including killing and skinning the snakes -- he wants to collect the venom that he says would otherwise be lost. This afternoon, he got a tiny amount from about 20 snakes -- about 3 tablespoons in all.

Darnell processes the thick liquid into a freeze-dried powder. He then sells the powder to research laboratories, where it's used to develop drugs to treat blood clots, heart attacks and high blood pressure. The powder is also used to make antivenin for those who get bitten by poisonous snakes.

At 65, Darnell says he hopes he'll be milking snakes until the day he dies.

"Why would it be otherwise?" He says someone once asked him, " 'What do you consider yourself to be with all these snakes around you, a snake man?' No, I consider myself to be lucky. I'll do it just as long as I can. Retire, why?"