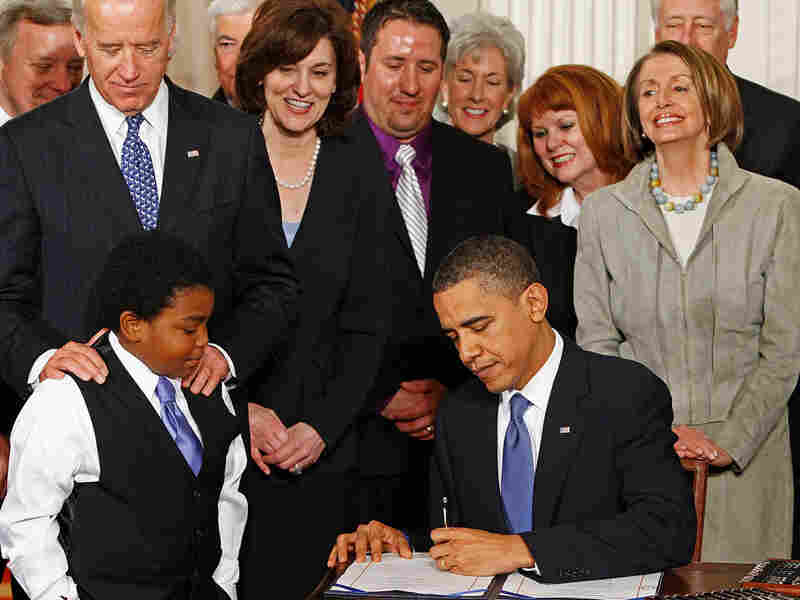 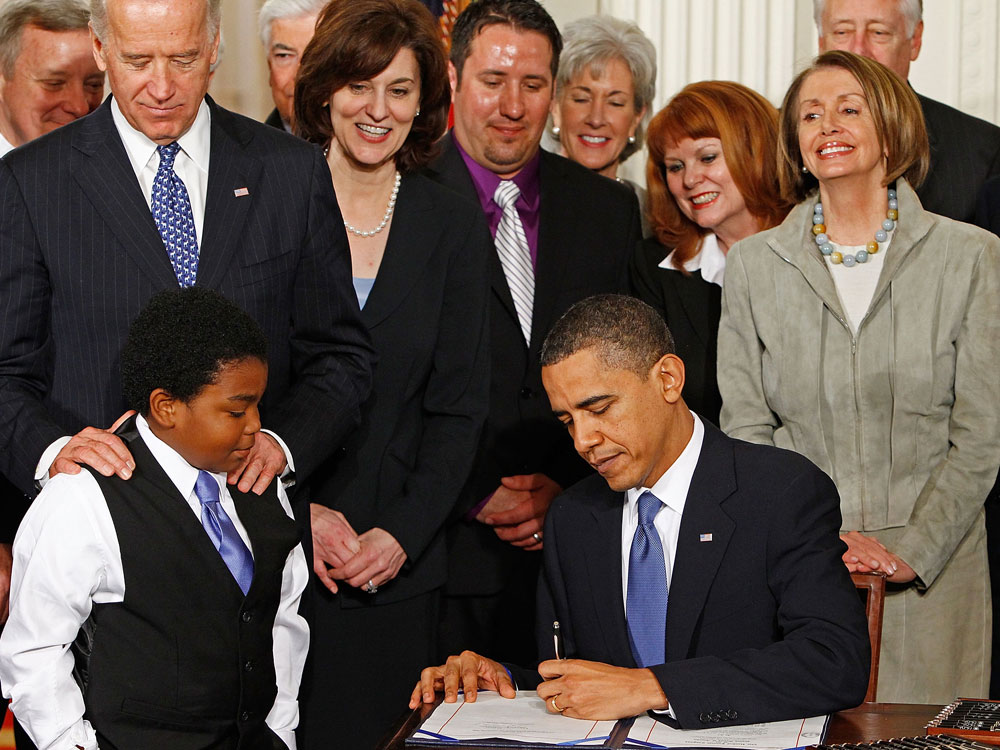 President Obama signed his sweeping health care overhaul into law Tuesday, marking the culmination of a yearlong struggle with Congress to make good on the central issue of his administration's domestic policy agenda.

"Today, after almost a century of trying. Today, after over a year of debate. Today, after all the votes have been tallied, health insurance reform becomes law in the United States of America," Obama told the group of House and Senate Democrats and guests assembled in the East Room of the White House.

"I am signing this bill for all the leaders who took up this cause through the generations — from Teddy Roosevelt to Franklin Roosevelt, from Harry Truman, to Lyndon Johnson, from Bill and Hillary Clinton," Obama said, as he used 20 pens to sign the Affordable Health Care for America Act. He also thanked Hillary Clinton and the late Sen. Edward Kennedy, whose widow, Victoria, was in the audience.

'It Is The Law Of The Land'

The president called the legislation's passage "a testament to the historic leadership -– and uncommon courage -– of the men and women of the United States Congress" and thanked congressional Democrats, who he acknowledged had "taken their lumps during this difficult debate."

"Yes we did!" someone yelled, to laughs from the crowd.

Obama and party leaders lobbied hard to win over enough wavering Democrats to push the measure through the House. It passed late Sunday on a 219-212 vote with no Republican support. The legislation, estimated to cost $938 billion over the first decade, extends coverage to 32 million uninsured Americans and bans insurance company practices such as denying coverage to people with pre-existing medical conditions.

The president now must sell it to the American people. On Thursday, Obama planned to visit Iowa City, Iowa, where as a presidential candidate he announced his health care plan in May 2007, to talk about how it will help lower health care costs for small businesses and families.

The White House has characterized the trip as a victory lap, but it is more likely aimed at shoring up public opinion. Popular support for the measure has waned amid a withering months-long attack from conservative groups and the health insurance industry, which have collectively spent tens of millions of dollars on advertising aimed at killing the legislation.

Underscoring the acrimony, more than a dozen states sued the federal government Tuesday over the constitutionality of the new law.

For Democrats, passing the bill was necessary to show they have the clout to deliver on big legislation. Republicans, who stood in lockstep against the health overhaul, are banking on a backlash in November among moderate Americans — many of whom voted for Obama — who opposed it. 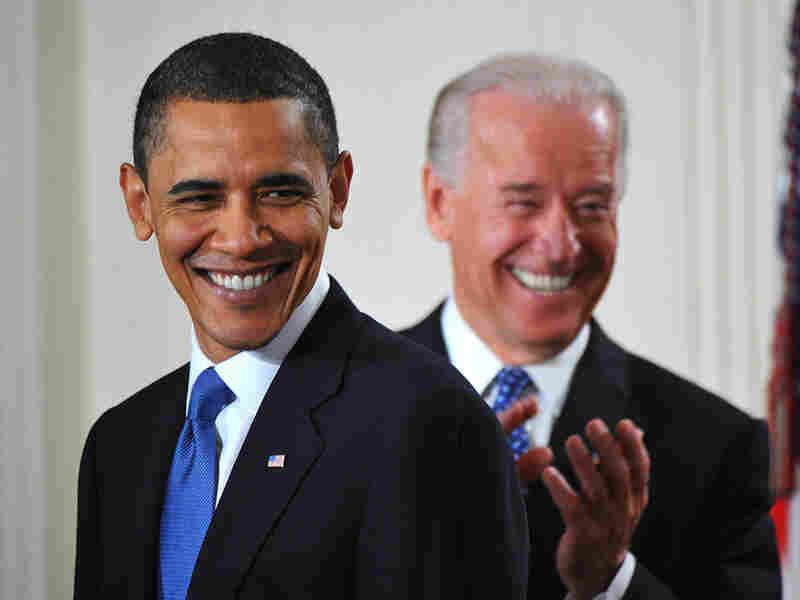 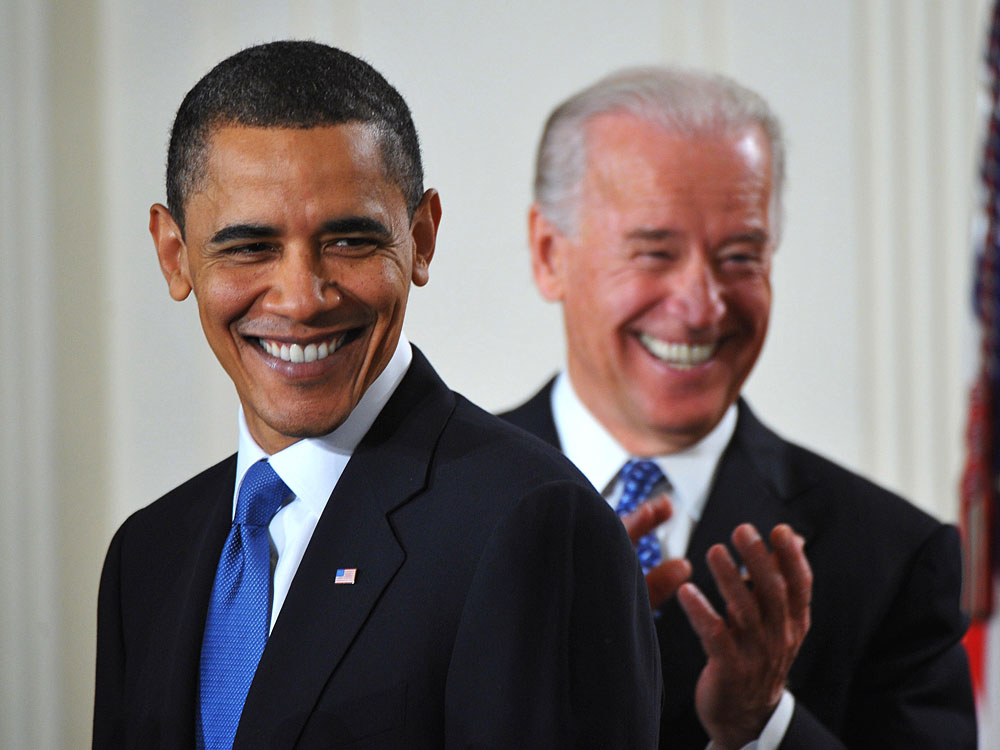 President Obama smiles before signing the health insurance reform bill Tuesday in the East Room of the White House.

White House aide David Axelrod said in an interview Tuesday that Obama administration officials need to explain the benefits of the new plan to the American public. Republican Party Chairman Michael Steele, also making the rounds on TV news shows, accused Axelrod of offering the public a lollipop before rendering a needle.

A separate bill, containing amendments to the overhaul, now goes to the Senate, where it needs a simple majority to become law. If Republicans manage to change anything in the reconciliation bill, it would have to go back for another vote in the House.

Sen. Judd Gregg, the ranking Republican on the Senate Budget Committee, told NPR Tuesday that the reconciliation bill "should be adjusted."

Gregg said Republican senators would try to eliminate key provisions, such as mandating that uninsured Americans get coverage, as well as its funding mechanism: new taxes on the wealthiest Americans' so-called Cadillac health plans.

"We'll offer amendments to try to improve things like eliminating the individual mandate or addressing the issue of tax policy or getting proposals, which cause us to look at delivery of quality and value ration than quantity and repetition," Gregg said.

In other words — as Rep. John Boehner (R-OH) said last week ahead of the House vote — Republicans are "going to do everything we can to make it difficult for them, if not impossible, to pass the bill."

Within minutes of Tuesday's signing ceremony, the attorneys general of 13 states filed suit in a Florida federal court to block specific provisions in the new health care law as unconstitutional. They argue that Congress has no authority to force people to buy insurance. The lawsuit names the U.S. departments of Health and Human Service, Treasury and Labor as defendants.

Some states, such as Virginia and Idaho, have enacted specific laws to rebuff the federal mandate that everyone buy insurance beginning in 2014 or face a fine.

"We believe clearly that the United States government does not have the authority to mandate that everyone buy health insurance," Virginia Attorney General Ken Cuccinelli told CNN.