Accessibility links
How Republicans Learned To Reject Climate Change There's always been more skepticism about global warming among Republicans than Democrats, but there have also been many bipartisan efforts to address the issue. That may no longer be the case. 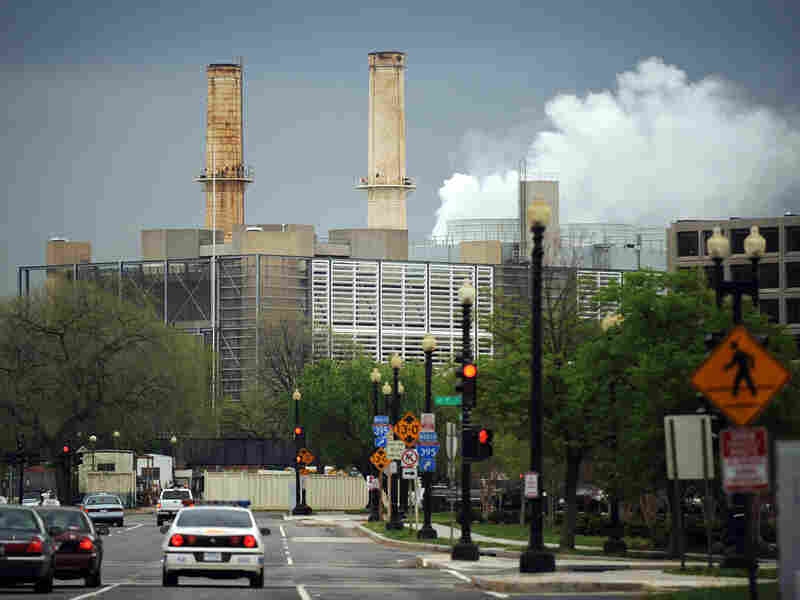 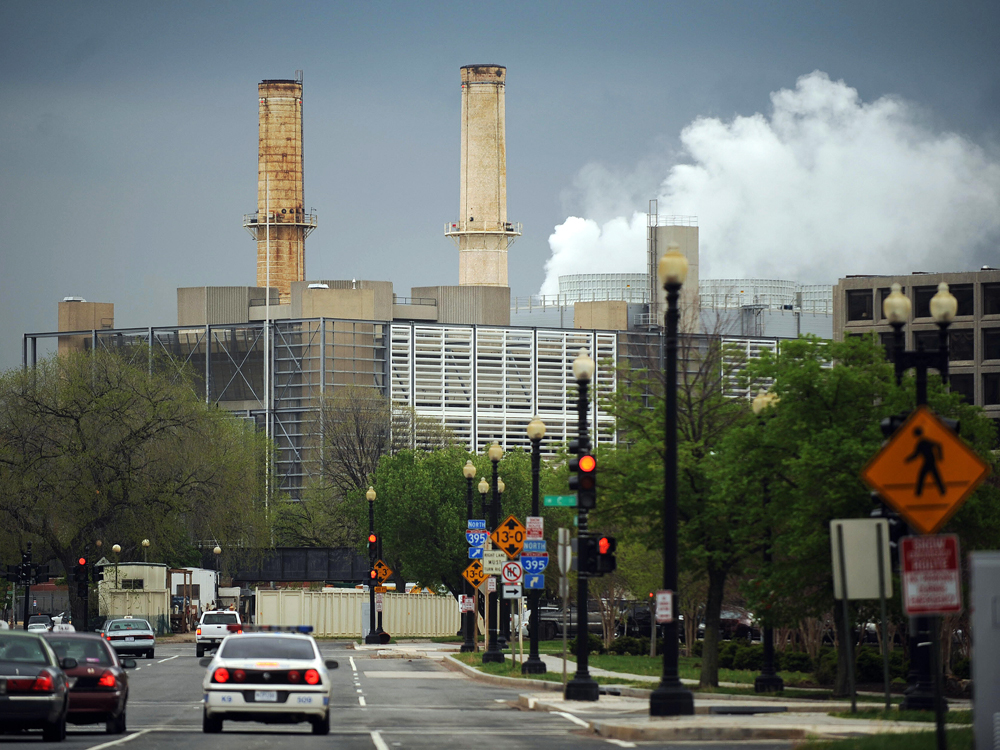 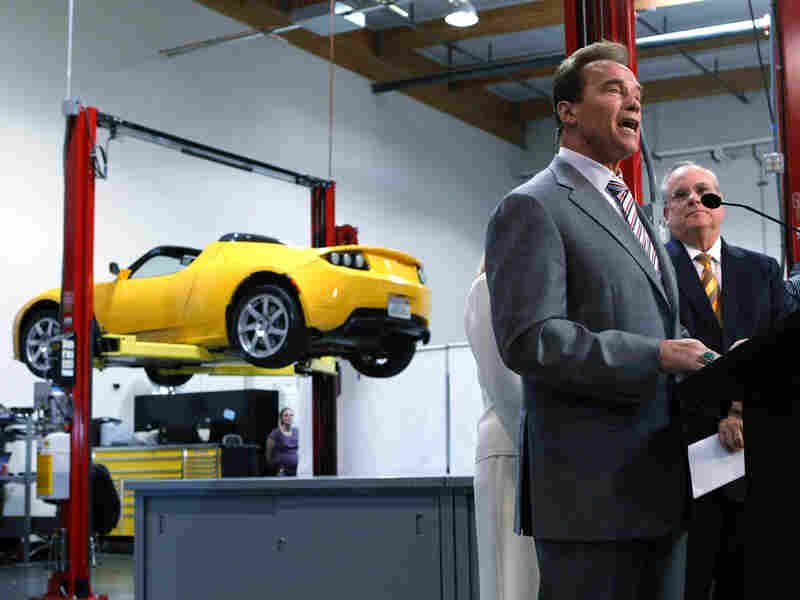 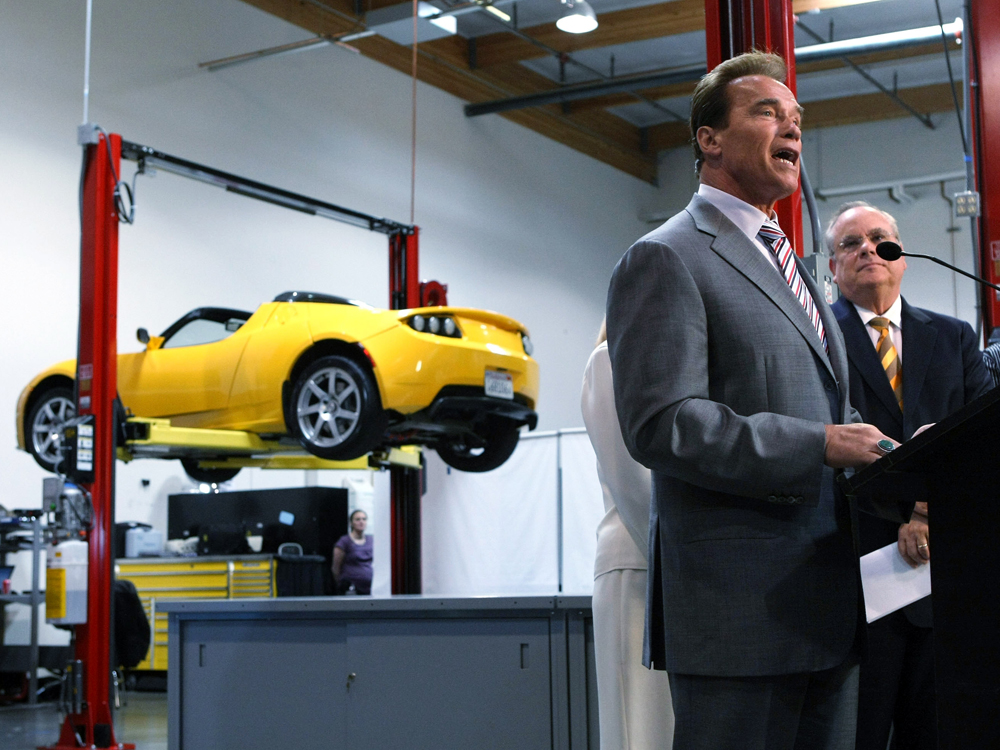 California Gov. Arnold Schwarzenegger — seen here at the San Carlos, Calif., offices of electric sports car manufacturer Tesla Motors — has been a vocal advocate of a robust regulatory response to climate change. But nowadays, such Republican support for climate regulation is rare.

As climate change emerged as a top issue on the national scene a few years ago, it had one unusual quality: The response to it showed surprising signs of bipartisan support.

Two or three years ago, Republicans such as Sen. John McCain and Govs. Arnold Schwarzenegger and Charlie Crist played nearly as prominent a role as Al Gore in advocating a robust regulatory response.

No more. Climate hasn't yet become as partisan an issue as, say, health care and taxes. But it's getting there.

Some Republicans who advocated tough environmental measures are leaving the scene, such as Schwarzenegger, who signed a landmark California law capping carbon emissions in 2006 but is term-limited out of office as governor this year.

Others have switched their positions, advocating more of a market response and shying away from strict governmental controls. That's especially true of Republicans reaching for higher office — including the presidency.

No state has done more to address climate change than California, but Republicans there are working to reverse course.

Republican Gov. Arnold Schwarzenegger in 2006 signed into law AB 32, which sought to reduce California's emissions to 1990 levels by 2020. The legislation has been widely imitated by other governments but now is under attack at home.

Republican politicians and conservative groups are collecting signatures to put an initiative on the November ballot to suspend the law.

Steve Poizner, one of the two leading Republican candidates seeking to succeed Schwarzenegger, has endorsed the initiative, while his main rival, Meg Whitman, promises a one-year suspension of the law upon taking office.

Climate legislation has also been pushed in Congress by California Democrats. Henry Waxman was lead sponsor of the climate bill passed by the House last year, while Barbara Boxer has been pushing similar legislation from her perch as chair of the Senate Environment and Public Works Committee.

Those bills, too, are now under attack in the Golden State. Carly Fiorina, the former Hewlett-Packard chief executive, who is seeking the GOP nomination for Senate, "opposes Sen. Boxer's bill in its current form," says Julie Soderlund, a spokeswoman for Fiorina's campaign. "Study after study has shown that it will kill jobs."

Environmentalists have accused Fiorina of hypocrisy. At the 2008 Republican National Convention, she praised Sen. John McCain (R-AZ) for pledging to create a cap-and-trade system and develop alternative energy sources. "All of this will both create jobs and lower the cost of energy," she said.

"Most Californians would agree that protecting the environment is a priority," Soderlund says, "but creating more jobs is also a priority."

Insisting on caps on energy usage has become something of a nonstarter for GOP candidates. The public in general is growing more skeptical about climate change, but a recent Gallup poll showed that more than twice as many Republicans as Democrats say the seriousness of global warming is "greatly exaggerated."

"You see growing sentiment that climate change has been exaggerated," says Karlyn Bowman, a polling expert at the American Enterprise Institute.

Still, she adds, she is struck by the growing partisan divide on the issue.

"The Republican-Democrat and conservative-liberal differences are quite large," Bowman says.

"Republicans tend to be the party of limited government," says James M. Taylor, a senior fellow at the Heartland Institute, a conservative think tank in Chicago. That makes them more skeptical of energy policies that he says will cost average households a good deal of money.

Opposition to cap-and-trade legislation nearly became official Republican Party dogma. It was one of 10 items on a list some members of the Republican National Committee wanted candidates to be required to take a stand on. They would only receive party backing if they agreed to at least eight.

The RNC rejected the idea of a purity test in January. But party candidates have needed no such official sanction to express their disapproval to cap-and-trade.

Sarah Palin has always expressed skepticism that climate change was man-made, but as governor of Alaska, she thought her state should prepare for its effects.

"The point is, it's real, we need to do something about it," she said in an interview during her vice presidential run in 2008.

Last December, she tweeted that climate science was "bogus."

Two years ago, Minnesota Republican Gov. Tim Pawlenty appeared with Janet Napolitano, then the Democratic governor of Arizona, in a nationwide radio ad criticizing Congress for not addressing climate change. On NBC's Meet the Press last month, Pawlenty, considered a likely presidential hopeful in 2012, said, "Cap-and-trade ... would be a disaster."

"With Tim Pawlenty, I guess he sees that there's a need to talk about climate change in a more skeptical frame to make himself more appealing in a Republican primary," says Jim DiPeso, vice president for policy and communications at Republicans for Environmental Protection.

Climate change has turned into a point of attack in several GOP Senate primary races this year. In Arizona, former Rep. J.D. Hayworth has frequently castigated McCain for his past climate-change efforts. McCain has been keeping mum on the issue of late, both at home and in Washington.

Other GOP politicians seem to have experienced their own changes of heart. As a state senator, Scott Brown voted two years ago in support of Massachusetts participating in the Regional Greenhouse Gas Initiative, the Northeast's regional cap-and-trade program.

During his successful campaign for the U.S. Senate this winter, however, Brown expressed doubts about the science underpinning global warming theories. He explained his new position by saying that RGGI hadn't worked.

Similarly, Marco Rubio, as speaker of the Florida House, declared in 2007 that "this nation — and ultimately the world — is headed toward emission caps." He backed the idea of creating a state cap-and-trade program the following year.

In his current campaign for the U.S. Senate, though, Rubio has blasted Crist, his primary opponent, for having pushed the cap-and-trade idea. Last month, Rubio said that he doesn't believe the scientific evidence for human-influenced climate change.

It's true that Republican Sen. Lindsey Graham continues negotiating with Massachusetts Democrat John Kerry and independent Joseph Lieberman of Connecticut in hopes of crafting a climate change bill, which will very likely be released next month. But Graham has attracted no other Republicans who support the effort publicly and has been widely castigated back home in South Carolina. The Charleston County GOP passed a resolution condemning Graham for undermining "Republican leadership and party solidarity for his own benefit."

This leads straight to the chicken and egg question. Are many Republican leaders growing more skeptical about climate legislation owing to concerns raised by their political base? Or are GOP voters following a shift among top officials and conservative media?

"Many ordinary citizens take their cues on complex political issues from leaders of the political party that they identify with," says DiPeso, from the GOP environmental group.

But Daniel J. Weiss, senior fellow and director of climate strategy at the Center for American Progress Action Fund, which is a Democratic organization, says that it's public opinion that is leading the leaders in this case.

He cites the frequent attacks against global warming efforts launched by Rush Limbaugh and commentators on Fox News Channel. "That has really riled up their highly conservative base," Weiss says.

He also notes that elected officials are well aware of the opposition to congressional climate change legislation led by energy companies and the U.S. Chamber of Commerce — a group that has already announced it will spend $50 million seeking to influence this year's elections.

"If you're a Republican, would you really stand up to them and risk getting on their wrong side," Weiss says, "when they have so much money to spend?"