Accessibility links
Republicans On Health Care Fight: 'It's Not Over' One prominent Republican drew the ire of his fellow party members this week by calling the passage of the health care bill the GOP's Waterloo. But Republicans say the issue has lost none of its power to motivate the opposition in the midterm elections and beyond. 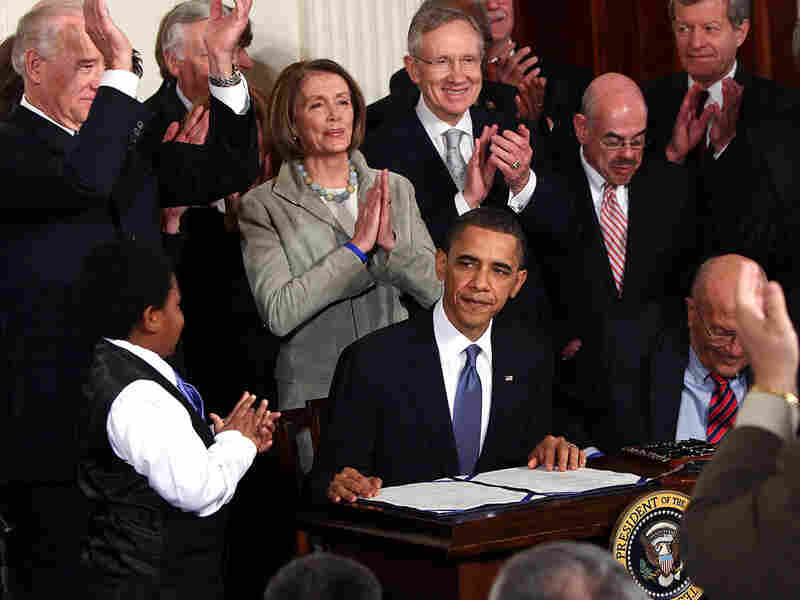 Democrats applaud President Obama's signing Tuesday of the health care overhaul into law, but senior Republicans warn that the fight over health care is not over. Win McNamee/Getty Images hide caption 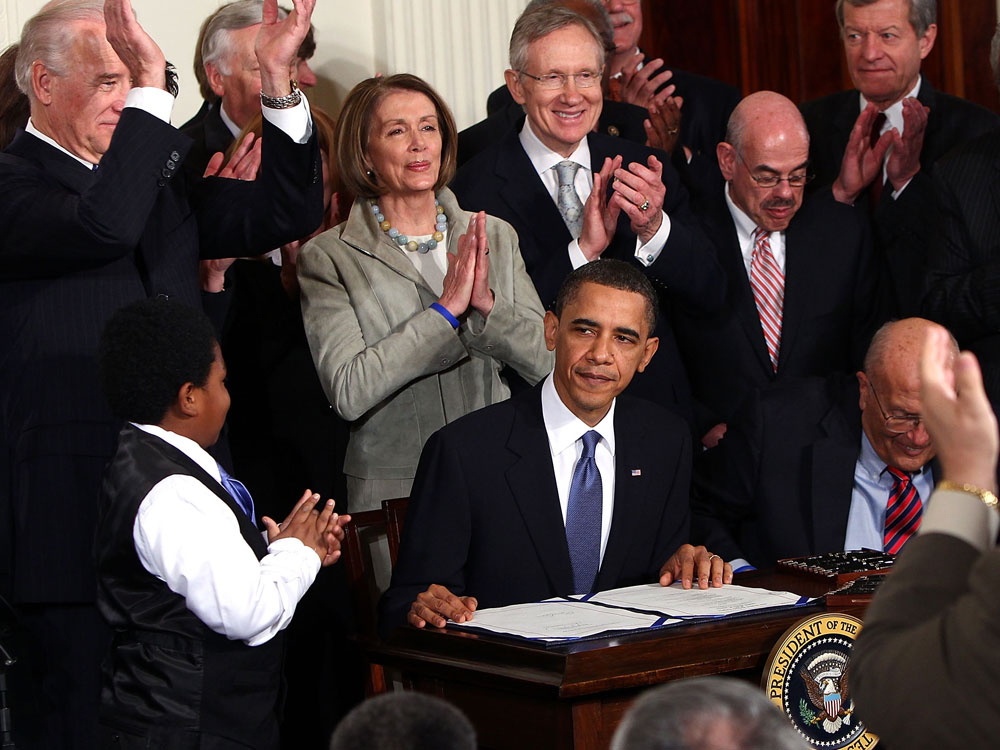 Democrats applaud President Obama's signing Tuesday of the health care overhaul into law, but senior Republicans warn that the fight over health care is not over.

Over the past six months, Republicans used the White House push for a health care overhaul as a way to build grass-roots energy and rebuild enthusiasm among activists demoralized by the Democratic sweep back in 2008.

While the effort to kill the health care bill ended in defeat for the GOP, conservatives say the issue has lost none of its power to motivate the opposition to the White House in this midterm election year and beyond.

Republicans were aggressive in their rhetoric opposing the bill before the vote, and nothing has changed since. Republican National Committee Chairman Michael Steele echoed other members of his party in calling it "Armageddon." Arizona Sen. John McCain is promising to work to repeal the bill, and says it will be a dominant issue in coming midterm elections.

"We're going to have a very spirited campaign coming up between now and November," McCain told ABC's Good Morning America.

The View From The States

While inside-the-Beltway analysts were parsing how the health care vote would play in the November midterm elections, many state Republican leaders are convinced the issue will be a boon to their candidates.

"We'd rather the legislation hadn't passed, but I promise you, it's going to be tremendous for us," says Jim Stelling, who has served on the Florida Republican Party's board of directors since 1984.

"We've been talking about health care for a year and a half," he says,"and believe this is going to be devastating to Democrats here."

"If this was something good," Smith said, "the Democrats wouldn't have had to work overtime to browbeat people to get it passed."

She predicted that it will further complicate Senate Majority Leader Harry Reid's uphill battle for re-election this fall.

Dissatisfaction with the health care legislation, Smith says, will be on display Saturday in Reid's hometown of Searchlight, Nev., where a Tea Party-movement rally, headlined by Sarah Palin, is planned.

In Florida's Orange County, GOP chairman Lew Oliver outlined a blueprint that he believes ensures that the health care issue will resonate through the fall midterm elections.

"This works on three levels for us," he says. "Democrats turned upside down a system that 86 percent of people are happy with, they did it during a terrible economic time, and a lot of games were played in accomplishing the task," he said. "The tool in the arsenal is that Washington just doesn't care."

Indiana Rep. Mike Pence said Tuesday that Republicans will use every possible approach to derail the bill, adding defiantly, "This fight is not over."

Waterloo For The GOP?

Earlier this week, David Frum, a former speechwriter for President George W. Bush, angered many of his fellow conservatives when he wrote a blog post criticizing Republicans for putting all of their effort into killing the bill, rather than working with the White House to make it more palatable to the GOP. That miscalculation, Frum wrote, turned the health care bill into "Waterloo" for Republicans.

Frum's view is very unpopular in conservative circles. Erick Erickson, who runs the Web site RedState.com, says Frum is wrong. He says Republicans stuck by their core principles and should be applauded. In defeat, he says, there is a way forward.

"I've been telling people not to get mad, get even," Erickson says. "We need to replace the Democrats who voted for this with Republicans."

Sights Set On Control Of The House

The Republican Party has sent out a new fundraising e-mail featuring a bold headline against a backdrop of flames; it reads, "Fire Nancy Pelosi." The e-mail urges people to send money so that the GOP can win the 40 House seats it needs to take the speakership away from Pelosi.

Already, polls had predicted potentially big GOP gains in Congress this November. But repealing the bill and starting over, as McCain suggests, would require not just a GOP majority, but a veto-proof majority. That's something that not even the most optimistic Republican predicts could happen.

Erickson says that if Republicans do win the House, they'll be able to affect how the health care law is implemented. "They can obstruct it legislatively through the appropriations process," he says.

But Republican political consultant Mike Murphy offers caution. "My thinking is more gridlock is probably not the answer that people want to hear about," he says.

Murphy says that if Republicans were to take the House and maybe the Senate, it would be incumbent upon them to offer positive and plausible alternatives.

More immediately, Murphy says, Republicans can go after Democrats even for things that the majority party considered but didn't actually implement — such as floating the idea of approving the health care bill without a full vote (the so-called "deem and pass" procedure).

"They get a little credit for not doing it," Murphy says. "But it's like the guy who sticks a gun in your ribs and says, 'Give me your wallet.' You take out your wallet and he puts the gun away. The Republicans definitely have a bloody shirt to wave about process."

Conservatives are also putting a great deal of hope in the idea that the courts could kill the health care legislation. More than a dozen state attorneys general have filed lawsuits challenging the bill.

One focus will be the requirement that nearly all Americans purchase health insurance. Andrew Langer, president of the Institute for Liberty, says that's unconstitutional.

"Congress does not have the power to force an individual to buy a particular product in the marketplace," Langer says. "They cannot do that."

But the Justice Department and many legal scholars say the law would likely survive such challenges.

Ultimately, the biggest opportunity this health care battle gives conservatives may be in the way that it has helped to unify their oftentimes divided coalition — social conservatives with one agenda, fiscal conservatives another. Michael Franc of the Heritage Foundation says that's no small thing.

"Anyone running for federal office — and even most people running for state office — are going to be asked, 'Are you for or against repeal?' " Franc says.

And repeal, Franc says, will refer not just to the health care bill, but to the entire Democratic agenda.

A new Gallup poll, however, also shows that Republicans have a very big challenge ahead of them. The poll found that by a 49 percent to 40 percent split, Americans now see the health care overhaul as a good thing.