Accessibility links
A Taxing Question: DIY Or Hire An Accountant? NPR asked Facebook users whether they prefer to do their own taxes or hire a professional. Hundreds of people — including actors, musicians and entrepreneurs — responded with tales of tax anxiety. One couple even said they set aside a romantic holiday to do their taxes. 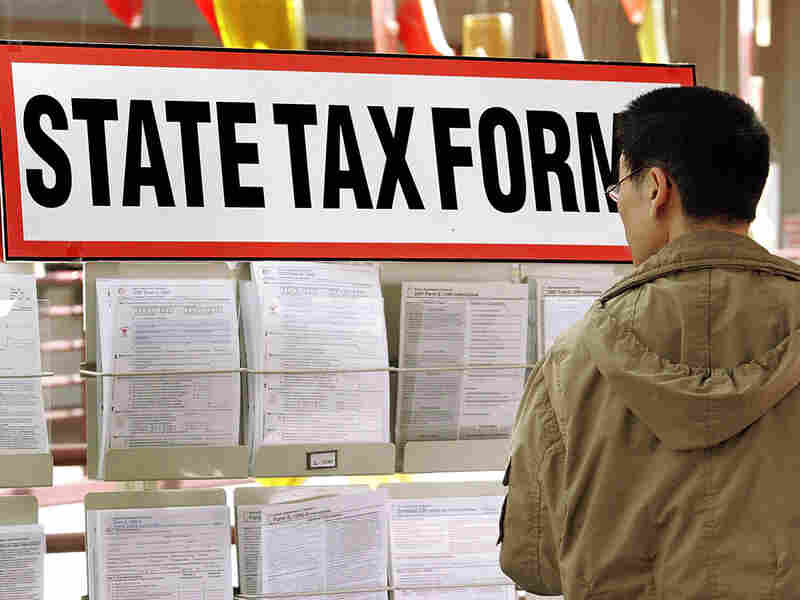 In April 2008, Qiao Ming picks out 2007 tax forms at the Illinois Department of Revenue in Springfield. Some people prefer to do their own taxes, while others take comfort in using a professional. Seth Perlman/AP hide caption 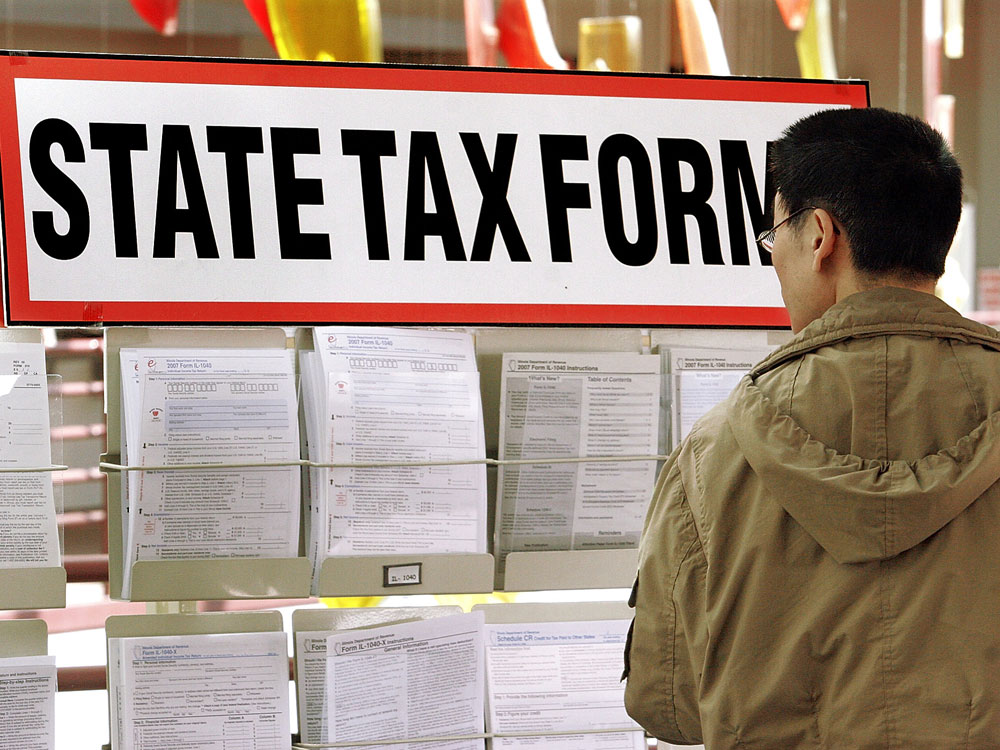 In April 2008, Qiao Ming picks out 2007 tax forms at the Illinois Department of Revenue in Springfield. Some people prefer to do their own taxes, while others take comfort in using a professional.

It's the time of year when tax preparers work 18-hour days and taxpayers wonder if they might not be better off hiring a professional.

NPR put out a query on our Facebook page asking how people decide whether to do taxes on their own or get professional help. The response was overwhelming: There were more than 50 comments in the first two minutes and 850 responses overall.

For Jane Anstett, turning to an accountant was all about peace of mind.

"I hate taxes," Anstett says. "They give me anxiety and I call it 'tax anxiety.' "

When she says anxiety, she means it. It all started when Anstett tried using tax software back in 1998: "Sweat, panic attack, my heart was beating — wondering, you know, 'Oh my gosh! What is that number going to be?' " Anstett recalls. "And it goes on for hours."

The funny thing is, Anstett has a degree in accounting and even passed the Certified Public Accountant exam. But calculating her financial fate is just too much to handle. So, Anstett has an accountant friend do her taxes for her.

NPR To Facebook:
How Do You Handle Your Taxes?

I have always had the nagging suspicion that I'm missing out on some big, hidden deductions by not getting professional help. So I took my return to a professional for a 'second look' this time. The good news/bad news was that there were no such hidden bonanzas! — Subash Sundaresan
Fremont, Calif.

This year, I think I really got over the hump and it took me less time than I thought it was going to take. — David Falchek
Scranton, Pa.

Until this year I had always done my own. But with a new child born last year, losing my job, and starting my own business, I hired a CPA for the first time. I'm glad I did. It was money well spent. — Ed Jones
Worthington, Ohio

I hate taxes. They give me anxiety and I call it 'tax anxiety.' Sweat, panic attack, my heart was beating, wondering, you know, 'Oh my gosh! What is that number going to be?' — Jane Anstett
Grandville, Mich.

My husband and I do our taxes every year together on Valentine's Day. And then we go to dinner. It’s a great way to get them done early. — Jody Boyce
Lincoln, Neb.

David Falchek, a writer from Scranton, Pa., gets great satisfaction from doing them himself.

"This year I think I really got over the hump and it took me less time than I thought it was going to take," says Falchek.

But there was a time when Falchek decided his taxes had gotten too complicated to handle on his own.

"I did pay a CPA to do them," Falchek recalls. "Then, the next tax season came around and I looked at them and I thought, 'You know what, I already have the blueprint here. I am going to be doing the same forms. All that's really changing is the numbers that are going on them.' "

His financial life hasn't changed much, so he's been doing them himself ever since. But Falchek is a numbers person. So is Subash Sundaresan, who works for a start-up tech firm in the San Francisco Bay area. For the past several years he's used TurboTax. And he's had this lingering fear that he was leaving money on the table. So, Sundaresan got a second look.

"I took it in to a professional this time and the good news and the bad news is there wasn't any such hidden either gold mine or land mine, so it was pretty much as it was," Sundaresan says.

In Lincoln, Neb., Jody Boyce and her husband do their taxes together on the same date every year. The tradition started several years ago.

"I was like, 'OK, we can do them on Saturday,' not even thinking about what the date was, until a friend of mine asked me, 'What are you doing for Valentine's Day, on Saturday?' And I'm like, 'Oh, I'm doing my taxes,' " Boyce recalls.

After they finish with their 1040EZ, they go out for a nice dinner.

But taxes don't spell romance for everyone. One person who commented said she and her husband turned to an accountant after doing their own taxes caused the ugliest argument in their eight-year relationship.

For Ed Jones, 2009 was the tax year when his life got significantly more complicated. His wife gave birth to their son last January. Then, Jones lost his job. He went on unemployment, sold some stock to help pay the bills and ultimately started his own business, which started bringing in income.

He says he could probably go back to doing his own taxes but plans to continue using an accountant.

"At some point, especially when you have a baby, time is a precious commodity," Jones says. "To sit down and have four to five hours of uninterrupted time to do your taxes, you know there's more important things to do in life."

If you think Jones has a complicated tax life, try being a stage performer. NPR heard from actors and musicians who have to file returns in every state their tours takes them — not to mention trying to figure out whether makeup is an acceptable write-off.

A bad experience with a tax preparer prompted Ylan Mui to try and do her own taxes this year.

"I'm a confident, capable woman of the 21st century and I'm going to do this myself," Mui says, describing her mind-set when she headed into the project.

Mui is a business reporter at The Washington Post and wrote up her experience for the paper. Let's just say when it comes to doing her taxes, confident and capable go only so far.

"Five hours after messing with TurboTax ... I realized that I actually was not capable of doing this myself and I needed help," Mui says.

Her taxes are pretty complicated. Mui and her husband have two rental properties and own their home. After answering all of the program's questions, it said she owed more than $5,000 to the IRS.

"I said to myself, 'If I really owe this much money, I want to hear it from a person, not a computer,'" Mui says.

Mui had forgotten to enter the mortgage interest on her home.

What's Right For You?

So, should you hire a professional? It all depends on how complicated your financial life is and whether you trust yourself to get it right.

About 60 percent of taxpayers hire someone to prepare their taxes, according to the IRS.