Accessibility links
Fossilized Pinky May Point To New Human Relative After finding a fossil in the mountains of Siberia, scientists were able to decode its DNA. But what they found was surprising: It was neither human nor Neanderthal. This seemingly new species of early human suggests that our family tree may be bigger than we previously thought. 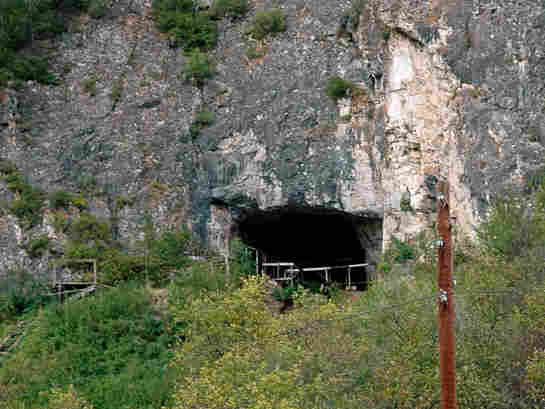 The fossil finger was found in a cave in the Altai Mountains of Siberia. Whoever that finger belonged to was neither human, like us, nor Neanderthal, the only other member of the human line known to be living in Europe at the time. Courtesy of Bence Viola hide caption 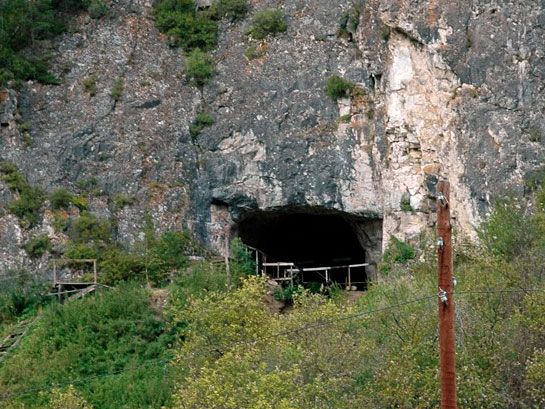 The fossil finger was found in a cave in the Altai Mountains of Siberia. Whoever that finger belonged to was neither human, like us, nor Neanderthal, the only other member of the human line known to be living in Europe at the time.

Anthropologists didn't have much to work with on this paleontological puzzle — just a piece of a pinky finger discovered in a cave in the Altai Mountains of Siberia.

But what most surprised scientists at the Max Planck Institute in Germany was the DNA inside that finger — specifically, mitochondrial DNA, which is found in every human cell.

It's rare to be able to isolate DNA that's 40,000 years old, so when researcher Johannes Krause finally did, he called his boss, anthropologist Svante Paabo.

"Johannes called me when I was in the U.S. and told me about this, and it was absolutely amazing," Paabo says. "At first I didn't believe him, and I thought he was pulling my leg."

What the DNA showed was that whoever that finger belonged to was not a human like us. Nor was it a Neanderthal, the only other member of the human line known to be living in Europe at the time, according to research described in the journal Nature.

A Mystery In Our Family Tree

The bone came from a cave called Denisova. Paabo calls the individual who owned the finger "the X-woman" — the X stands for mystery. But to determine whether this was a previously unknown species of human, researchers needed DNA from the nuclei of the bone cells. They're working on it, Paabo says.

Scientists know generally when this new hominid — as human ancestors are known — appeared on the scene by comparing the number of mutations in the DNA of humans, Neanderthals and the X-woman. Mutations occur in a population at a certain rate that can indicate how long they've evolved separately from a common ancestor.

Though Paabo can't say if this was an unknown species on the human line, he can say the X-woman's ancestors probably migrated from Africa a million years ago, well before modern humans evolved.

Terry Brown, a geneticist at the University of Manchester in England, says the discovery at least suggests that our African ancestors were pretty restless.

"I think that probably hominids were leaving Africa much more frequently than we imagined. There's no real reason a hominid should stay in Africa if its populations grow and it needs more space, and obviously it's logical to move into Eurasia."

Brown notes that there's plenty more DNA to be found in fossils, especially from colder climates where they're better preserved. "I suspect there's going to be some more surprises around the corner, as well," he says. "If there are other bones we can get DNA from, I think it's possible we can find greater variation among our ancestors than we previously realized."

Krause says one thing about the X-woman is clear: She would have lived a rough life. "In the cave, we also find things like woolly mammoth or woolly rhino," he says. "Also that region was, of course, affected by the ice age. So it was probably colder than it is today."