Accessibility links
A Turning Point For Tea Party ... And The GOP? Tea Party activists are expected to descend on Senate Majority Leader Harry Reid's Nevada hometown Saturday for an anti-Washington rally. Amid a growing number of reported threats against Hill lawmakers and recent racist episodes involving the activists, the gathering has taken on a larger significance.

A Turning Point For Tea Party ... And The GOP?

A Turning Point For Tea Party ... And The GOP? 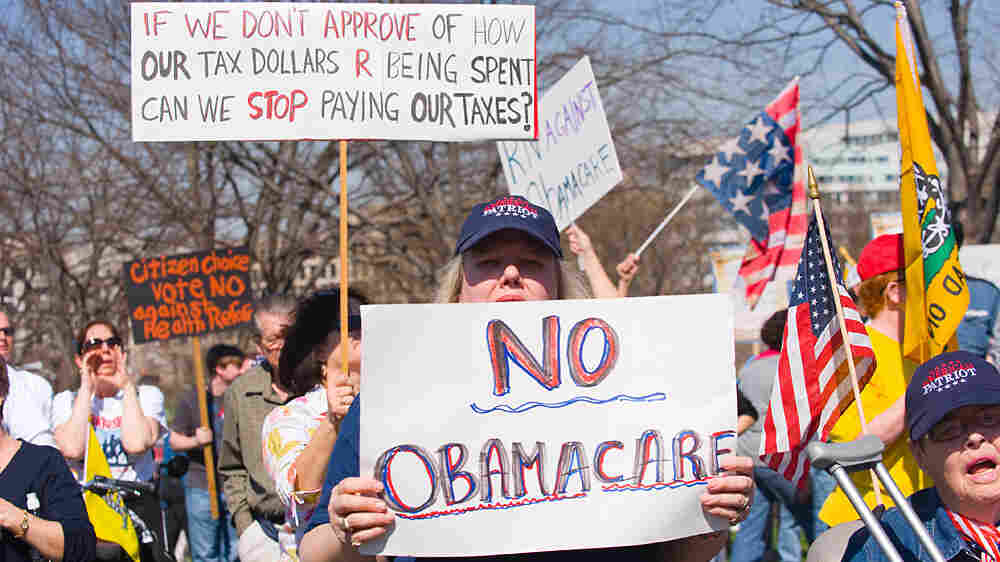 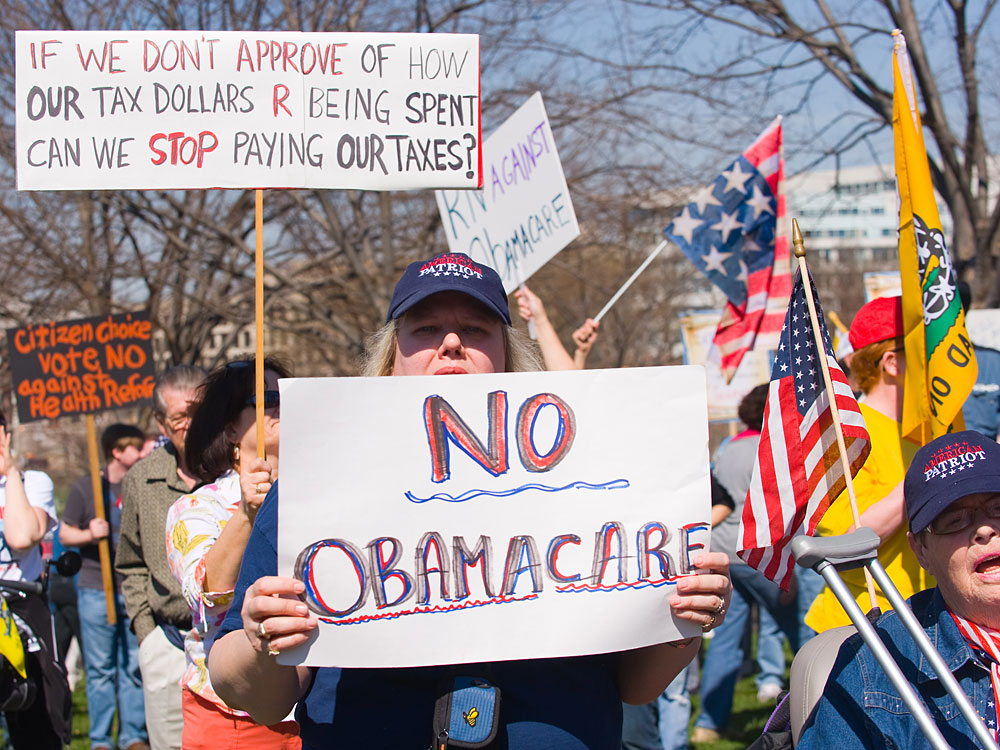 Supporters of the Tea Party movement demonstrate against the health care bill Saturday outside the U.S. Capitol in Washington.

A clarification: The assertion that some Tea Party activists subjected some Democrats to racial epithets should have been attributed in an earlier version of this story to the congressmen making the claims.

Scores of Republican candidates and elected officials -- including Nevada Gov. Jim Gibbons and those angling to challenge four-term Democrat Reid in the fall -- plan to be on hand to work the crowd at the so-called "Showdown in Searchlight."

But amid growing reports of threats against House members and last weekend's Tea Party ugliness in Washington, D.C. -- where some Democrats said some activists lobbed racist and anti-gay epithets at them on their way to vote on health care legislation -- the gathering has taken on a larger significance.

It promises to be an important moment not only for the Tea Party movement, which has been showing signs of turmoil over its future direction, but also for a national Republican Party yearning to harness the energy of Tea Partiers but wary of being linked with its more extreme adherents.

Members have reported receiving threatening phone calls, and home-district offices in at least three states have been vandalized.

"In our democracy," Hoyer said, "we resolve things — not through violence, not at the point of a gun."

Such ugly, extremist incidents do not represent "the true Tea Party participants," says Sharron Angle, a former Nevada assemblywoman who is among Republican candidates lining up for the chance to take on Senate Majority Leader Harry Reid in the fall.

"Agitators outside the Tea Party movement are trying to give it a black eye," says Angle, who will attend Saturday's Tea Party rally in Searchlight, Nev., Reid's hometown.

"This weekend will be critical for the Tea Party and conservatives," says David Yepsen of Southern Illinois University's Paul Simon Public Policy Institute.

"If the television images that come out of this gathering are of a bunch of nuts, the American people are going to say that these people aren't fit to lead the government," Yepsen says. "Republicans have to be mindful of what they're walking into."

The rally comes at a time of heightened emotion and anger over the passage Sunday of national health care legislation, and new questions about whether Tea Party adherents have encouraged the harassment of congressional Democrats.

House Majority Leader Steny Hoyer, a Maryland Democrat, has said threats have been made against more than 10 House members since the health care vote. He and Republican leaders are examining ways to respond to the surge in threats reported by House Democrats.

Home-district offices of House Democrats have been targeted by vandals in states that include New York, Kansas and Arizona. In Virginia, the FBI was called in to help county officials investigate a severed gas line leading to the home of Democratic Rep. Tom Perriello's brother. A blogger and Tea Party activist posted the address online, mistakenly listing it as Perriello's. The blogger encouraged activists to "drop by" the house for a "good face-to-face chat."

In a statement Wednesday, Perriello called on House and Senate leaders to "state unequivocally tonight that it is never OK to harm or threaten elected officials and their families with anything more than political retribution."

"Here in America," he said, "we settle our political differences at the ballot box."

It's no surprise that Republican candidates and officials will head to Searchlight this weekend, given the size of the crowd and the potential for vote prospecting, says GOP strategist John Feehery.

"Republican leaders have a right to go anywhere to talk to people who want to oppose President Obama," he said. "And it doesn't make sense to go to war with Tea Party people, because they are mostly Republicans who want elected officials to live up to Republican Party ideals."

Feehery's assessment of Tea Partiers' political leanings was buttressed this week by a new national poll that found that 74 percent of voters who identify with the movement consider themselves Republicans or Republican-leaning independents.

War Of Words On Capitol Hill

A Capitol Hill war of words broke out Thursday over threats reportedly made to House Democrats who voted for the health care bill.

Democratic Party Chairman Tim Kaine touched off the rhetorical fracas with a statement that said Republican leaders can no longer blame "outsiders" for threats and vandalism. He called on Republican leaders not only to repudiate the threats, but also to "tone down their own tactics and rhetoric to set a better example for their supporters and the country."

Kaine pointed his finger directly at House Minority Leader John Boehner for claiming that the health overhaul was "Armageddon" and that Democratic Rep. Steve Driehaus of Ohio was a "dead man" politically.

GOP reaction was swift and fierce.

House Minority Whip Eric Cantor, in a terse appearance before reporters, accused Kaine and Maryland Democrat Chris Van Hollen, chairman of the Democratic Congressional Campaign Committee, of attempting to make political hay out of the spike in threats.

"Reprehensible," said Cantor, who reported that he, too, has been threatened because of his position and his Jewish faith. A bullet was shot through his campaign office in Richmond, Va., this week, he said, and he has also received threatening e-mails.

Boehner, in an equally brief appearance before reporters in the Capitol, said the national health care debate has been no angrier than others the country has weathered in the past — including those over the wars in Iraq. But, he added, "violence and threats are unacceptable, and they have no place in a political debate."

He ended his appearance abruptly after being asked about his comments about Driehaus, noting that no one saw his quote — which he said referred to the congressman's political future — until Driehaus "pointed it out."

Democratic leaders have argued that Hill Republicans also fanned the flames of extreme behavior during last weekend's deliberations and vote on the health care bill in a number of ways: by applauding from the House floor disruptive members of the public who had to be removed from the chamber by security; by taking to the Capitol balcony and waving "Kill the Bill" signs, and symbolically slapping a poster of House Speaker Nancy Pelosi while Tea Party protesters gathered below; and by a general lack of decorum that included Texas Republican Rep. Randy Neugebauer shouting "baby killer" on the House floor.

Boehner defended his caucus, saying there was a lot of activity "I would describe as unacceptable" on both sides of the aisle.

The Quinnipiac University survey also found that 88 percent of the movement's adherents are white, 77 of them voted for GOP candidate Sen. John McCain in the 2008 presidential contest, and 15 percent voted for future President Obama.

The numbers underscore what many Republican leaders say they already know: A majority of Tea Party members are, indeed, mainstream but disaffected, fiscally conservative Republicans who felt abandoned by the Bush administration and are alarmed by government spending and deficits during the Obama administration. The fringe elements in the movement, they believe, are not reflective of the whole.

"They're not a wing of the Republican Party," Feehery says, "but a group of Republicans who are just plain pissed off at everybody."

But an ideological split is becoming increasingly clear within the diffuse and essentially leaderless national Tea Party movement. Some activists are receptive to Republicans who want to bring them into the fold, while others want to move forward as a separate third-party movement.

Perhaps nowhere is that playing out more publicly than in Nevada.

In recent weeks, more than a dozen Tea Party-affiliated activist groups have turned on businessman Scott Ashjian, who registered the "Tea Party of Nevada" with the state and filed to run for Senate against Reid in the fall.

"Scott Ashjian has nothing to do with the Tea Party movement," says former state Assemblywoman Sharron Angle, who will compete for the GOP Senate nomination in a June 8 primary. "I've been at Tea Parties all over the state -- 14 of them -- and I never saw Scott at any of them."

Ashjian has pushed back, calling the groups paranoid and accusing movement members of being in the thrall of Republicans. His assertions echo national Tea Party concerns about the role of prominent GOP lobbyist Dick Armey in the movement.

"We've reached out to the Tea Party here, but it is being led around on a leash by the Republican Party here in Las Vegas," says Ashjian, who plans to attend Saturday's rally but is not on the speaking schedule. "We are the only independent representation of the Tea Party here, and they are bitter."

Angle and other Nevada Republicans have suggested that Ashjian is a Reid plant -- on the ballot to siphon votes away from the Republican senate candidate in a state where polls suggest that a generic Tea Party candidate could grab more than 15 percent of the vote. That's potentially enough, Angle says, to give Reid a fifth term -- a state-level example of the national Republican Party's nightmare scenario this fall.

"It looks like a ruse is being perpetuated here," she says.

Self-described big-tent Republican Cameron Lynch, a Washington-based political consultant, is among party members who caution against a full embrace of Tea Party adherents.

"We welcome the enthusiasm, but I personally, and hopefully the Republican Party, don't condone the racist and ethnic epithets," says Lynch, who previously worked for Republican senators Bob Dole, John Ashcroft and McCain.

Lynch says the GOP should court the Tea Party with a "side hug," not a full embrace. And he advises that Republican leaders issue a blanket statement affirming First Amendment rights to free speech but repudiating spitting on opponents, or yelling racist or misogynistic slurs.

"This is tough stuff, politics, but it doesn't mean we need to forego dignity," Lynch says.

Cautions Yepsen: "You can't go into a roomful of gas, light a match and say you're not responsible."

In the ramp-up to Saturday's Searchlight "showdown," Palin on her Facebook page announced the 20 Democrats she has targeted for defeat in November. She used a graphic depiction of a gun's cross hairs to pinpoint their districts.