Accessibility links
A Bumpy Test Ride With Google's Bike Map Many drivers rely on Google Maps to give them good driving directions. Bicyclists who've been asking Google to map out the best biking route to a destination recently got their wish, too. Using the service, two test riders recently met some unmapped obstacles. 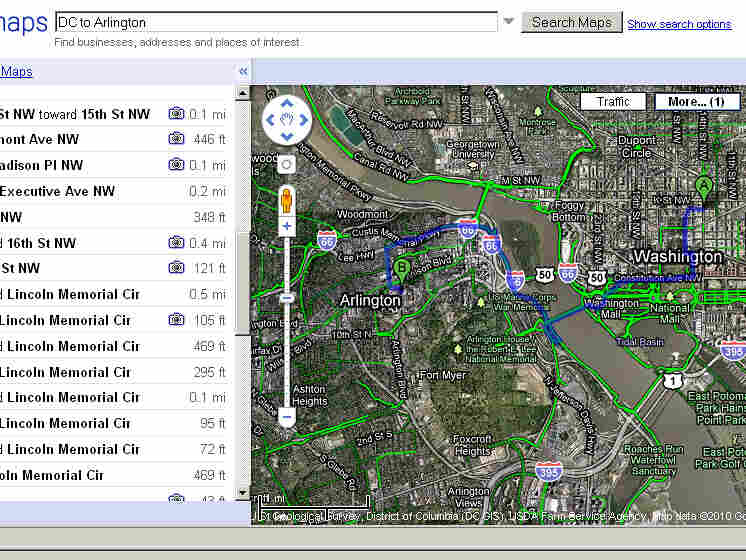 A screengrab of Google's map service for bicyclists shows a cycling route similar to the one the author used — complete with a ride through the White House grounds and multiple turns near the Lincoln Memorial. Screengrab (NPR) hide caption 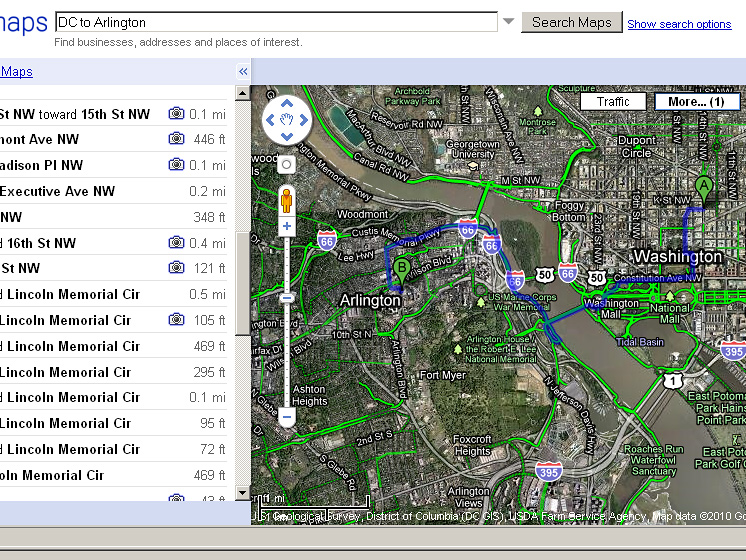 A screengrab of Google's map service for bicyclists shows a cycling route similar to the one the author used — complete with a ride through the White House grounds and multiple turns near the Lincoln Memorial.

Google Maps has long been one of the most popular Web sites for driving directions. Bicyclists who have been asking for directions that show the best biking path to a destination recently got their wish, too.

Peter Smith is a big fan of Google Maps. "I love Google Maps," he said. "I use it daily; I've used it for years."

When Smith started riding a bike to save money two years ago, it didn't work out so well. He looked up his route on Google — a quick trip from his house in Austin, Texas, to the bookstore.

"When I got out on the road, it felt terrifying, like death-defying," Smith said. "There were these big Ford F150s passing me by like really close, and I thought, man, there's gotta be a better way."

Google had shown him the fastest route for cars, which happened to also be the scariest way for bikes.

To test it out, a friend, Mike Brown, and I printed out directions from downtown Washington, D.C., to Arlington, Va., where Mike lives. The site gave us an estimate: 34 minutes to cover 5.4 miles.

We started pedaling, south toward the White House. But the street we were supposed to ride on was blocked by a spiky iron gate and a not-too-friendly guard.

"Is this East Executive Avenue?" we asked.

"And can we bike through here?"

So getting around the White House was a bit of a challenge for Google.

But that was nothing compared with what came next: eight instructions consisting of turning left and right toward Lincoln Memorial Circle. Over and over. Google was trying to help us stay off busy streets by sending us through a maze of unmarked paths on the National Mall.

We made it across the river into Virginia, but there was more trouble ahead. Another guard — this one at Arlington National Cemetery.

OK. So, I took my microphone and stuff, and we biked around the cemetery. Then we got lost.

An hour and 15 minutes after we started, we pulled up to Mike's house — about twice as long as Google had projected. Obviously, the company is still perfecting the bike directions. And it's taking user feedback.

So I went to the Google Maps Web site, clicked "Report a problem," and wrote, "You can't bike through the Arlington cemetery."