Accessibility links
A Tent-City Economy Grows In Haiti A nine-hole golf course in Port-au-Prince is now home to 50,000 people — and an economy that includes a makeshift movie theater and a lot of beauty salons. 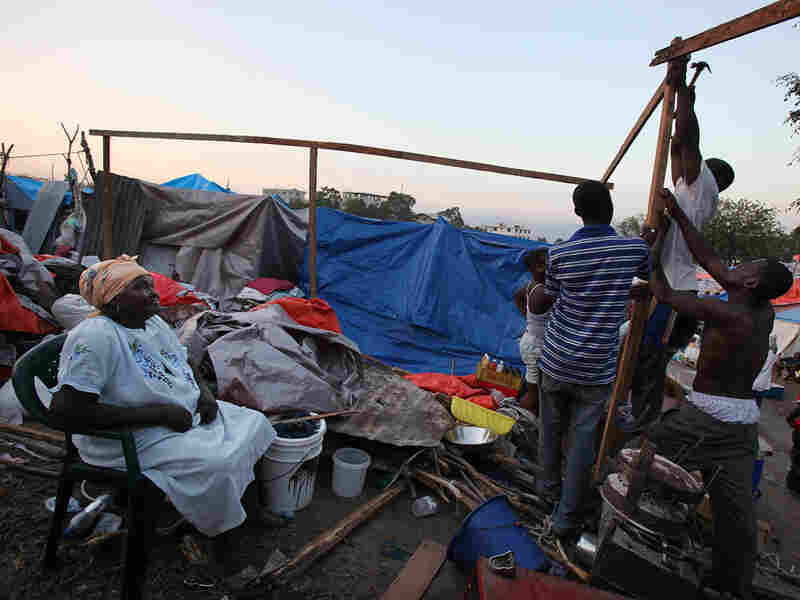 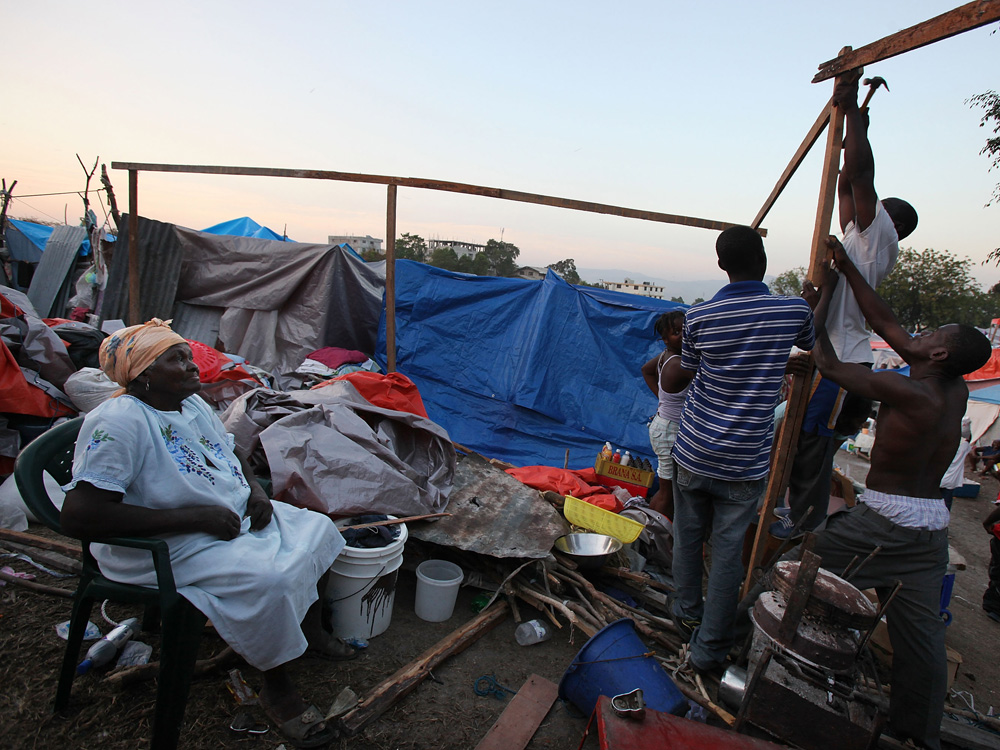 Earthquake survivors construct a makeshift encampment on a golf course in Port-au-Prince on Feb. 13.

"It don't matter which condition your life is in, you still have to keep yourself clean and look good," Yolene Samard, the proprietor, says while working on a customer's toenails.

Samard's big square tent is made out of tarps and bedsheets. She and her husband sleep in one half; the other half is the salon. It's clean and bright, with a shelf stacked with beauty supplies and a bench where customers wait.

She has tried to make it look like the salon she used to have, which was destroyed.

Most people in the camp have only whatever money they had in their pockets the day of the January earthquake, so few people can afford what used to be her most profitable service: hair treatments.

Instead, she mostly does pedicures. They're cheap. And, Samard says, the camp is so dirty that more women want pedicures now.

The pedicures are good for business. But Samard has to compete against a lot of other salons in the tent city — in fact, she has more competition than she had before the earthquake.

The tent city, a former nine-hole golf course, is now home to 50,000 people. There is no way to make money except by selling goods or services right here. So a schoolteacher might open a candy stand. A government accountant might sell spices or batteries.

This is mixed news for Samard. She has more competition for her business, but also more choices as a consumer. Every day, she goes shopping, tent to tent.

"We buy all kinds of food, because up there all they give is ... wheat grain and oil. One cannot live on this wheat alone."

Makeshift stores sell everything from rice and beans to fake hair and fake nails, Samard says.

Amilkar Gabriel saw a chance for business synergy. He noticed parents complaining about their cell phones running out of juice and kids with nothing to do. So he bought a generator and a small TV and turned his 6-by-10-foot tent into a movie theater and cell phone charging station. He was hoping to get the equivalent of 25 cents to charge a phone and another 25 cents for each kid to watch a movie.

"I know it's slow, because not everybody can afford to pay 10 gourdes to come watch movies," he says. So sometimes he cuts a deal with customers: Pay to charge your phone, and your kids can watch a movie for free.

He's losing money so far. Most nights he doesn't make enough to pay for the gas the generator uses. But he's going to keep at it, he says. After all, he's pretty sure he'll be living in a tent city for a long time.

This report is part of a special series on Haiti produced in partnership with PBS Frontline. You can watch a video version of this story online at pbs.org/frontline.