Accessibility links
Holland Taylor: A Class Act's Next Tough Dame She's played many a mom, but her real trademark is playing strong, gutsy women on screen. In an upcoming one-woman stage show, she takes on one of the gutsiest: former Texas Gov. Ann Richards. Susan Stamberg sits down for a conversation with the actress, who says Richards "has captured my imagination." 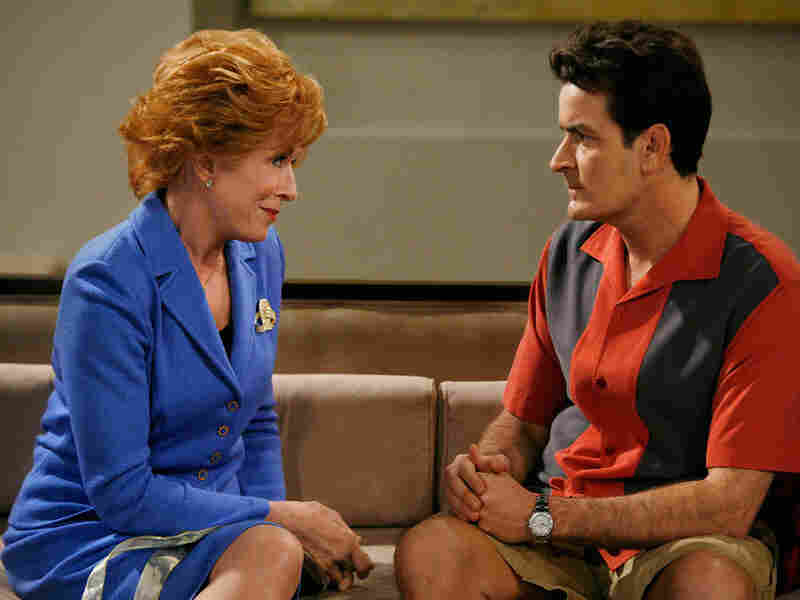 Holland Taylor has received three Emmy Award nominations for the comedy series Two and a Half Men, playing the acerbic, well-heeled mother of Charlie Sheen's self-involved bachelor — who keeps her listed on his speed dial at position 666. Warner Bros. hide caption 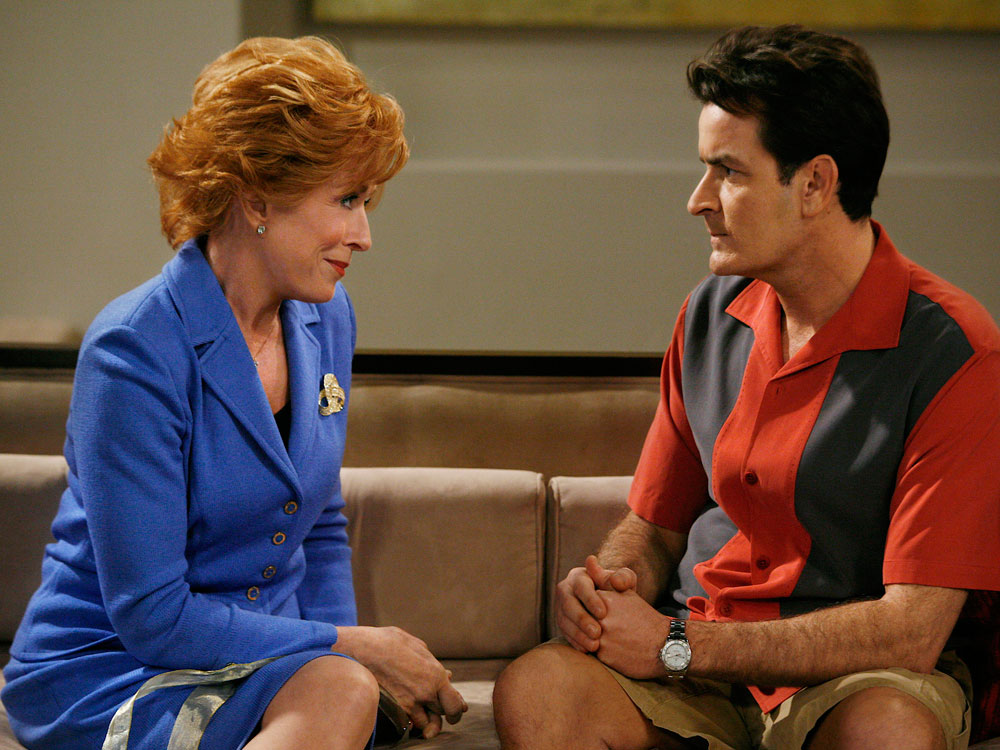 Holland Taylor has received three Emmy Award nominations for the comedy series Two and a Half Men, playing the acerbic, well-heeled mother of Charlie Sheen's self-involved bachelor — who keeps her listed on his speed dial at position 666.

'The Day Reagan Was Shot'

The name Holland Taylor may not be familiar, but you've probably seen her a lot. Among other intimidating ladies, she played the tough Harvard law professor in Legally Blonde — though often as not you'll find her playing someone's mother: Michelle Pfeiffer's in One Fine Day, Tina Fey's in Baby Mama, Debra Messing's in The Wedding Date, and Leslie's Mann's in George of the Jungle.

For a change of pace a few years back, she played Jim Carrey's pretend mother in The Truman Show. These days she's back in the maternal groove, playing the mother of Charlie Sheen and Jon Cryer on TV's Two and A Half Men. Nurturing, however, this latest mom is not — not with lines like, "I think God gave us children so death doesn't come as such a disappointment."

'She Had To Be Unshakable'

Taylor has intentionally lightened her workload in the past few years so she could spend every extra hour working on a project that means a lot to her personally: She's been researching and writing a solo show about Ann Richards, the colorful former Texas governor who died in 2006 at the age of 73. Taylor met the rowdy political icon only once, but she couldn't shake the impression Richards made.

"I don't even know how to say the words without sounding sappy, but she has captured my imagination," Taylor says.

The actress keeps a framed photograph of her subject on her night table; Richards wears a dark suit, her oval face and white, snowy hair almost jumping out of the photo. The lady had a way of making a connection in person, too, Taylor reports.

"She didn't blink; she didn't look away from people," Taylor says. 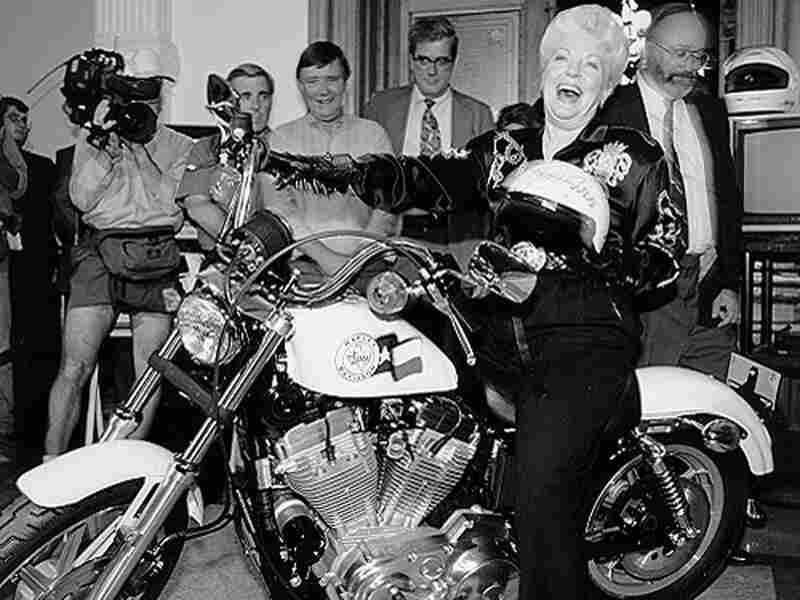 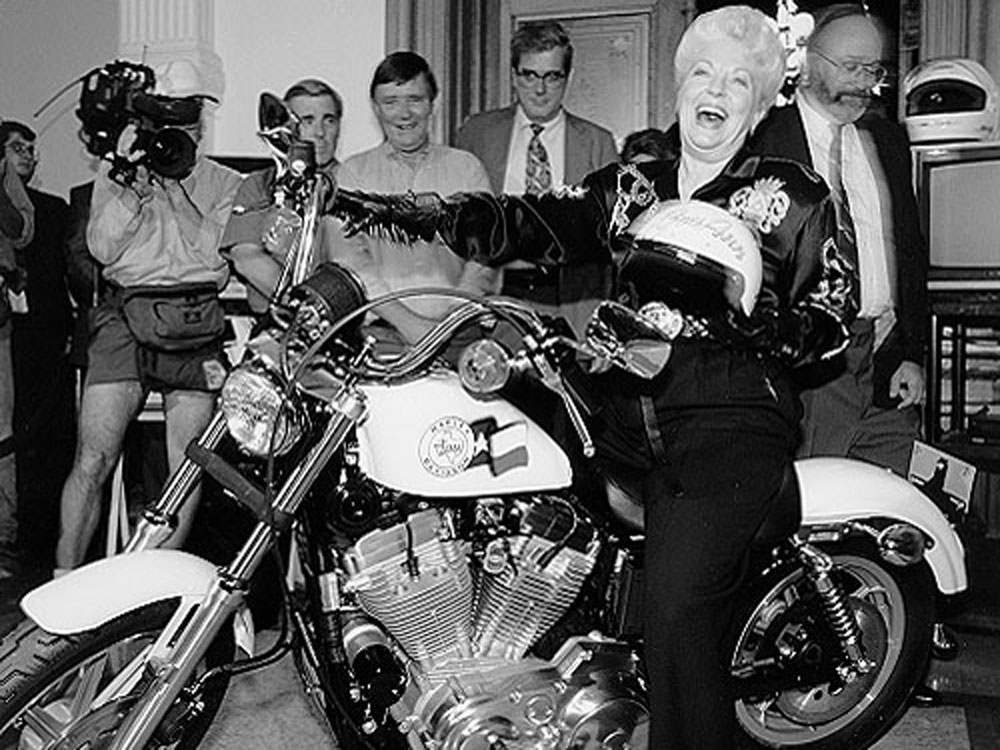 The late Texas Gov. Ann Richards was known for her flamboyant, tell-it-like-it-is speaking style — and for championing an array of progressive causes. 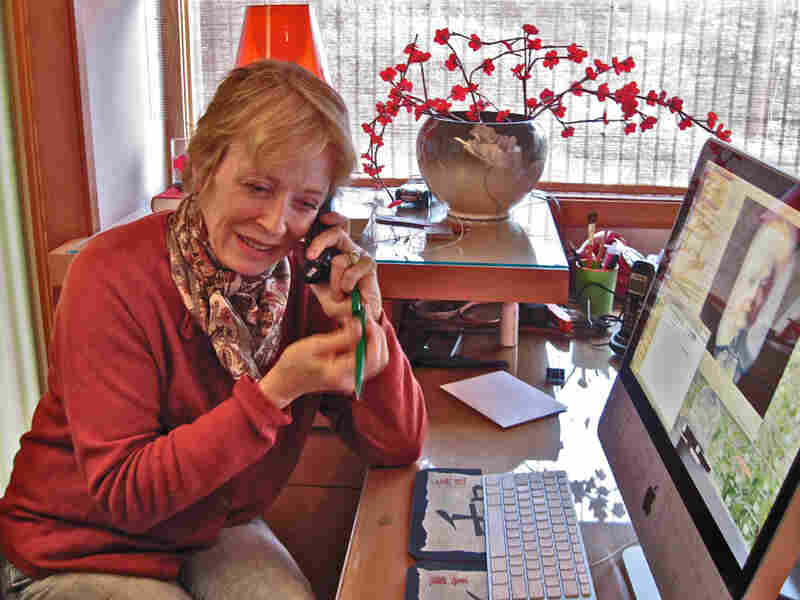 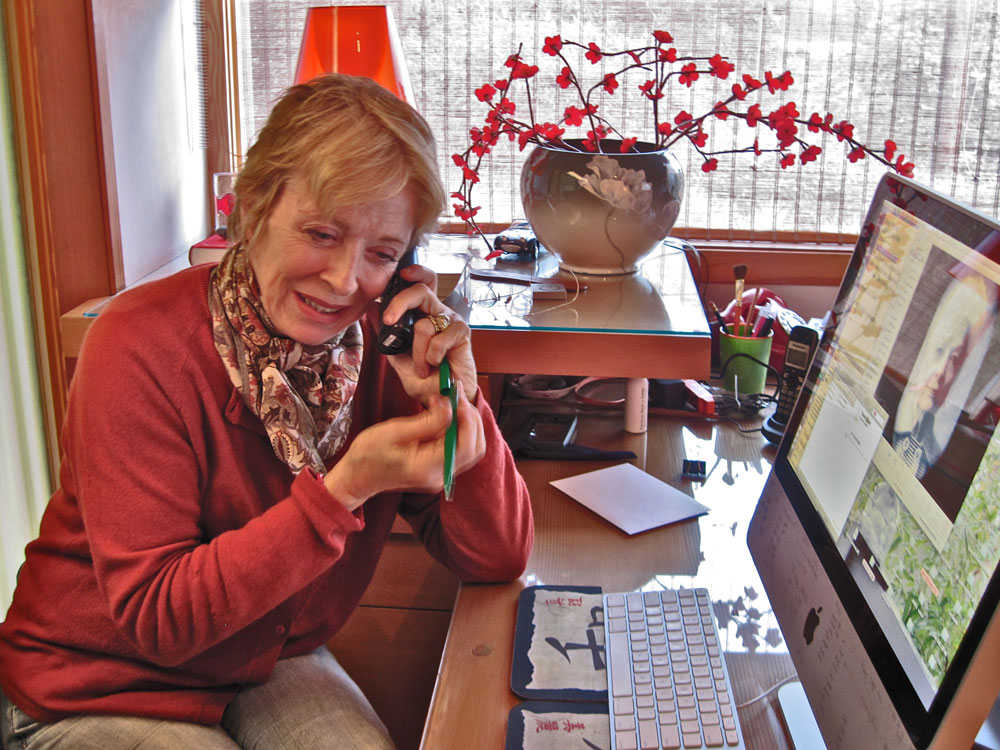 Taylor spent three years researching Richards for her one-woman show Money, Marbles, and Chalk, turning a spare bedroom into a trove of mementos and documentation.

Richards served just one term as Texas governor, from 1991 to 1995. (She lost her bid for a second term to George W. Bush.) She first came to national attention as Texas state treasurer, when she was chosen to give the keynote address at the 1988 Democratic National Convention in Atlanta. The line she's best remembered for? A dig at gaffe-prone candidate George Herbert Walker Bush, then running for the presidency against Michael Dukakis.

"He can't help it," Richards cracked about the elder Bush. "He was born with a silver foot in his mouth." Two years later, she was elected governor.

"To become governor of Texas — which was the ninth largest economy in the world, and it's a macho state, and it's a Republican state — and [later] when she became governor, she had to affect a stance of strength even more than what was her own," Taylor says. "She had to be unshakable."

Taylor began her research by reading everything she could about Richards. She gathered audio of her speeches and had them transcribed. She's created binders of transcripts, articles, everything. And she keeps it all in her modest guest room in her Hollywood home, which she now affectionately calls "Ann's Room."

To re-create Richard's crown of white hair — not a small part of the governor's persona — Taylor hired a show-business wigmaker.

"As her hairdresser and others would say in Texas," Taylor explains, "your hair has to match your rear end."

To help nail Richards' accent, she turned to an old colleague — Tom Hanks, with whom Taylor worked on the '80s sitcom Bosom Buddies. He recommended dialect coach Jessica Drake, who trained him for his role as Forrest Gump.

"I've been taught all the sounds and where they happen in the mouth and how they differ from mine," says Taylor, who's from Philadelphia. "'I just say 'Whether'; she goes 'Hwhether' or 'Hwhat.' It's a very key sound. My mouth and my body are going to have to be in the habit of saying 'Hwhy, Hwen, Hwaht.' "

Still, Taylor says she's not trying to full-on imitate Ann Richards. She wants to evoke her, this woman who stood up for the rights of women, African-Americans and Hispanics. Taylor said what really drew her to the Texas progressive was her profound sense of fairness. The actress says her image of Richards is that of the sort of mom whose kids "put out their hands for a cookie, and they don't even look because they know their piece is gonna be the same size."

"That was her essence," Taylor says. "She said, 'I know that life isn't fair. I know that. We all know that. But government should be.' "

Not Her First Political Role

In 2001, Taylor portrayed Nancy Reagan in the made-for-TV movie The Day Reagan Was Shot, starring Richard Crenna as Ronald Reagan.

"I enacted a loving wife," Taylor says, describing the choices she made about the character. "I went for that, because by God, Nancy Reagan was that. And you have to admire that aspect of who she was."

In one hospital scene, Taylor's Reagan becomes momentarily flustered as advisers pressure her to help her husband look happy and healthy for photographs, when he's clearly dazed and confused from the assassination attempt and subsequent surgery. But she pulls herself together and manages the situation.

"She knows that the nation needs to see it. On the other hand, she can't stand her husband being manhandled when he's in pain," Taylor says.

Strong, gutsy women are Taylor's trademark. In 1999, she won an Emmy as the sexy, provocative judge on The Practice. Accepting her Best Supporting Actress trophy, she thanked creator David Kelley "for giving me the chariot to ride up here on: a woman who can put a flag on the moon for women over 40, who can think, who are successes, who can cook — and who can cook!"

Taylor's solo show about Richards is called Money, Marbles and Chalk. It's an old Texas expression for going all-out — and Holland Taylor thinks that defines Ann Richards. The show premieres May 14 at The Grand 1894 Opera House in Galveston.

Note From A Holland Taylor Look-Alike