Accessibility links
For Community Colleges, A Hard Lesson In Politics President Obama hoped to use community colleges to create 5 million more graduates over the next 10 years. But an initiative to provide $12 billion in funding for this goal was dropped from the health care reconciliation bill — a victim of the usual horse-trading that creates winners and losers in Washington.

For Community Colleges, A Hard Lesson In Politics

For Community Colleges, A Hard Lesson In Politics 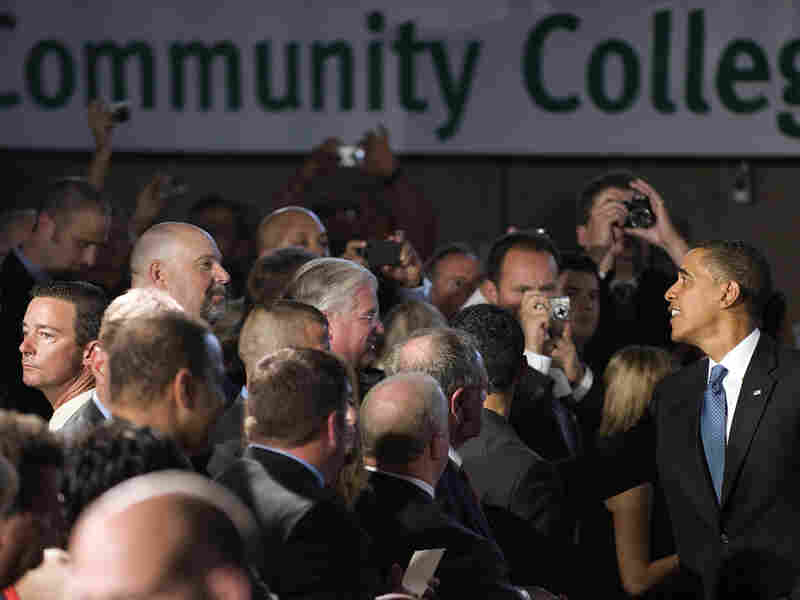 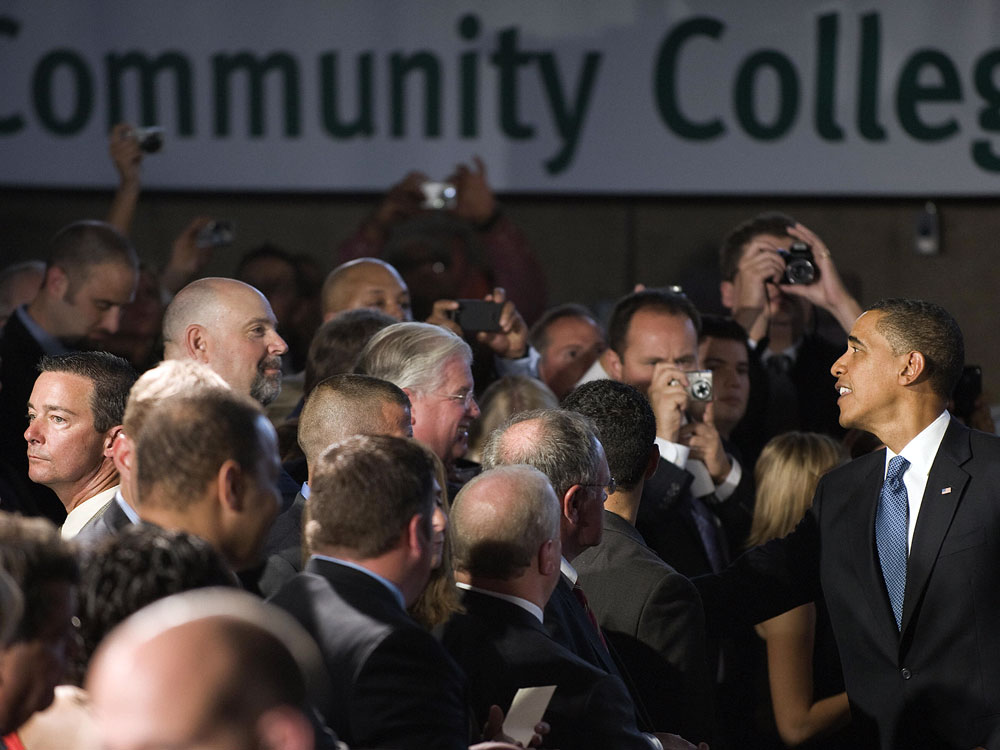 President Obama shakes hands at an event at Hudson Valley Community College in Troy, N.Y., last September. An Obama initiative would have provided $12 billion to boost community college funding and increase graduation rates, but it got dropped from the health reconciliation bill.

The federal government has traditionally ignored community colleges. But last summer, when President Obama unveiled his $12 billion American Graduation Initiative to boost community college funding and increase graduation rates, he described them as integral to the nation's economic success. His aim was to produce 5 million more graduates by 2020.

The House quickly approved the initiative, but it was dropped from the higher education measure attached to the reconciliation bill.

"It was the best chance — really since the GI Bill — for a game-changing federal initiative in higher education generally, and community colleges specifically," says Christopher Cabaldon, who runs a community college project at the New America Foundation.

Its failure is about more than a missed policy change, however. The story of a White House initiative that had the support of key members of Congress but couldn't make it into law offers an object lesson in how Washington really works.

Community colleges lack the glamour of celebrated research institutions and other four-year state universities, but they are the workhorses of the higher education system. Two-year colleges educate 45 percent of the nation's undergraduates. Forty percent of all public college graduates started at community colleges or have taken courses there.

Community colleges attract students for whom higher education represents an enormous opportunity — and, often, a struggle. The institutions disproportionately serve people who are poor, belong to ethnic and racial minorities, or who are working. Sixty percent of community college students start out by taking remedial courses.

It's not a coincidence that graduation rates are abysmal. Less than a third of their students complete a two-year degree within three years. The completion rate for part-time students is far worse than that.

This is the problem President Obama sought to address through his American Graduation Initiative. Federal higher education policy has centered on access — helping students get into and pay for college. He wanted to start putting some emphasis on completion.

Not only would the federal government have gotten into the community college game in a much bigger way, but its money would have prompted states and colleges to pursue their own innovations.

Advocates for community colleges hoped that the initiative would have an influence akin to Race to the Top, a $4 billion pot of federal money that has led numerous states to change laws regarding K-12 education; funds for that program are just now being released.

"There was some hope that the American Graduation Initiative could have had the same kind of catalytic effect on higher education," says Stan Jones, president of Complete College America, a nonprofit that works with states on completion strategies. "It's a missed opportunity."

But community colleges had gained the attention not only of the president, but officials sprinkled throughout the administration — including Jill Biden, wife of the vice president, who teaches at the nation's second-largest community college. Obama's initiative also enjoyed the backing of the Senate and House education committee chairs and had no real enemies.

Still, it couldn't get past the finish line. There were too many other demands on the higher education dollars that were included in the reconciliation bill.

The shift to direct student lending generated less savings than sponsors had hoped, meaning fewer dollars were available for other programs. And there were many claims on the money that remained. Demand for Pell Grants for low-income students far exceeded initial projections, while billions more were devoted to deficit reduction and the cost of the health bill.

That left a scramble for the relatively few dollars left for higher ed institutions. It was a race that community colleges couldn't win.

"There must have been some political work they had to do to keep everybody on board," says Richard Kazis, senior vice president of Jobs for the Future, a Boston-based think tank that studies workforce and education issues.

"Then you get to the question of how powerful is the constituency to preserve the community college funds," Kazis says. "Well, not enough."

Don't Get No Respect

Everyone knows that it's nearly impossible to kill any federal program, because each has a constituency that will fight tooth and nail for its survival. But groups such as community colleges that don't get much federal help face a Catch-22 situation.

Because they aren't already entrenched as recipients of federal dollars, they don't have the relationships and presence in Washington that would help them collect more federal dollars.

"The American Association of Community Colleges is not a major player, especially in relationship to the other interest groups involved here," she says.

"I know the colleges are grateful for the money that's in there, but it's for the status quo," says Goldrick-Rab. "The money for focusing on college completion might have been transformative."

Martha Kanter, the undersecretary of the Department of Education, says, "It's not as much [money] as would have come to us with the graduation initiative, but it's enough to get going."

She says the Department of Education hopes to have some leeway in how the new funds are spent, but admit she's "pretty sure we won't" have as much discretion as the department would like.

That leaves supporters of the American Graduation Initiative disappointed not only because they lost this round, but because they recognize that multibillion-dollar pots of new money for higher education don't come along every year.

Still, they vow to do better next time. "We do not have a strong voice in Washington to lobby for us," says Gail Mellow, the president of LaGuardia Community College in New York. "This was a wake-up call."