Accessibility links
The Prius Rules Hybrids — but Is Interest Falling? Toyota has sold 1 million Prius hybrids worldwide. But while Prius sales in the United States are strong, sales of many other hybrids are not. One recent survey suggested that the number of people interested in buying a hybrid has actually dropped in the past year.

Listen
The Prius Rules Hybrids — but Is Interest Falling? 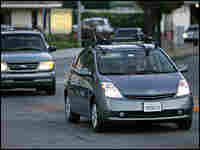 Myself, My Car: A Toyota Prius hybrid is seen driving down the street in San Anselmo, Calif. Justin Sullivan/Getty Images/Getty Images hide caption

Toyota has sold 1 million Prius hybrids worldwide, making it the most popular hybrid vehicle on the market.

But even though Prius sales are strong in the United States, sales of many other hybrids are not.

A recent survey suggests the number of people interested in buying a hybrid has actually dropped in the past year.

Those buying the Prius cite its technology, its environmental benefits — and of course the fuel efficiency. The 4-cylinder, 5-passenger car consistently gets more than 50 miles to the gallon in combined city and highway driving.

But While the Prius has become mainstream — it was the sixth-best-selling car in May — many of the other hybrids on the market have fallen short.

Rusty Hefner, director of market analysts at Hybridcars.com, says that part of the blame for that may lie with dealers.

Hefner mentions the Saturn Aura hybrid as an example. The car's conventional version was named North American Car of the Year by a panel of journalists.

"But the hybrid version," Hefner said, "I haven't seen any ads for it. It doesn't seem to have been marketed very heavily, dealers don't seem to be pushing it and as a result, not that many are going out the door."

Other factors may be work too, buyers may lack confidence in an automaker's hybrid technology, or fear that the company won't support hybrids over the long term — or in some cases, that the fuel economy isn't all that great.

While overall hybrid sales are up substantially over last year, a recent survey by JD Power suggested that the number of people interested in hybrids actually decreased, from 57 percent to 50 percent.

Consumers understand that the fuel economy they're likely to get will be less than what's on the window sticker. And as Micheal Omotoso of JD Power points out, the hybrid price premium is often thousands of dollars.

"So if you do the math, you see its not necessarily a good deal," Omotoso said.

At the same time, some gas-only models have become very fuel efficient. And as more clean diesels enter the U.S. market, consumers are showing an increased interest in those, as well.

Still, Prius sales continue to mount, getting a boost from something a bit intangible: image, and what the car says about those who buy them

"The first reason I bought my car, was because, 10 years from now, I didn't want to be embarrassed," said Prius owner George Sulluck, a software programmer.

"I kind of looked at Prius as redefining cars. I was looking for something on the edge."

Sulluck is not alone. According to another recent survey by JDPower, image was the No. 1 reason for buying a Prius.

JD Power's Michael Omotoso said, "Alot of people buy hybrids because of what it says about them, just like people buy sports cars to project a certain image. And with a hybrid, it's like, 'Look at me, I'm environmentally conscious.'"

The Prius, Omotoso said, does that best. While many other hybrids, including the Honda Civic and Ford Escape, look almost identical to their conventionally powered counterparts, the Prius was designed from the ground up as hybrid-only car.

But lest hybrid owners get too cocky about their individual contribution to a cleaner environment, consider this sobering observation. The U.S. Department of Energy says in the seven years that hybrids have been available here, the total amount of gasoline saved adds up to less than the amount the United States imports every day.