Accessibility links
The New Republic: Palin, Queen Tea Sooner rather than later, Tea Partiers will need to decide whether to continue as a pure protest movement or evolve into a serious political party. Michelle Cottle hopes for the latter and knows they'll have to choose a leader. It could be Sarah Palin's true calling. 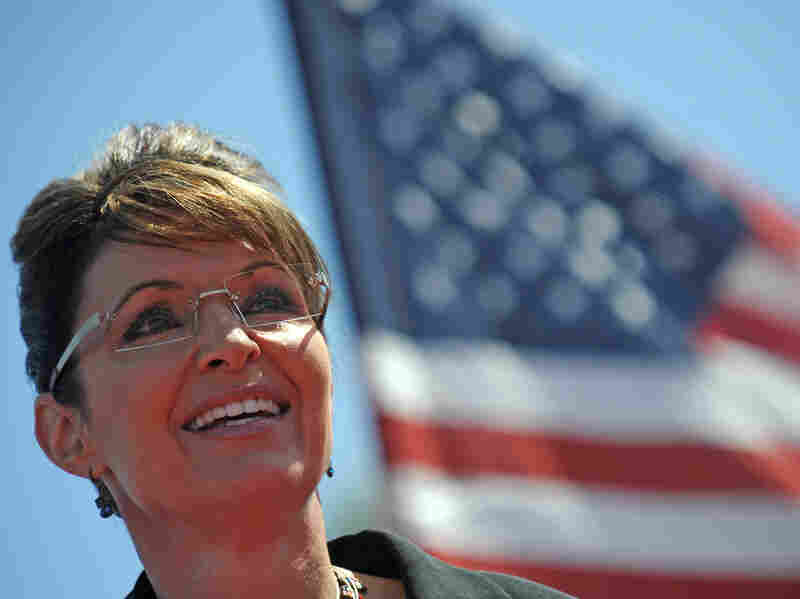 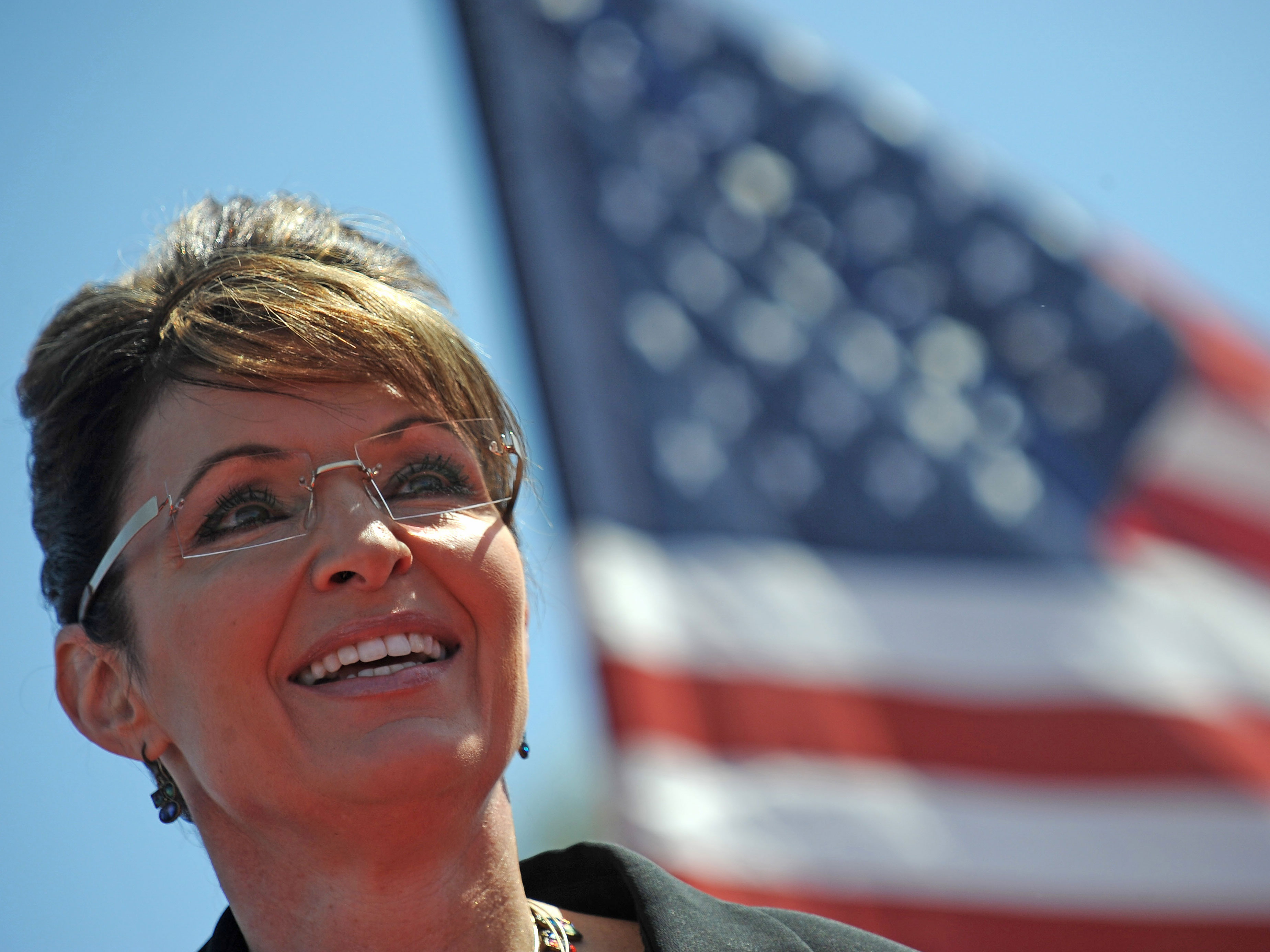 Note to Sarah Palin: Screw the reality show. Taking Americans on televisual tours of Alaska's natural wonders would I'm sure be fun and lucrative, but the gig cannot possibly take maximum advantage of your special talents. (As a general rule, nature shows don't traffic in high-octane demagoguery.) Instead, allow me to suggest a better, more meaningful way to serve your country: Step up and save the Tea Party from itself.

After an electrifying start and some tantalizing victories (remember when Scott Brown was the new conservative Superman poised to derail Obamacare?), the Tea Partiers have suffered serious p.r. setbacks of late. The ugliness of the health-care protests at the Capitol and the subsequent threats and vandalism against congressional Dems who voted for the bill (whether perpetrated by actual Tea Partiers or simply by their spiritual brethren) spurred some Republican leaders and Tea Party organizers to denounce and distance themselves from the movement's more noxious antics.

But even before this, the Tea Party had been plagued by infighting — there were internal lamentations about the movement becoming a tool of the GOP, and there was even a lawsuit filed against an ex-leader of the Tea Party Patriots who had dared to take up with the Tea Party Express. More broadly, the movement's anarchic, bottom-up structure may give its gatherings tons of snap, crackle, and pop, but it is lousy for formulating and delivering a coherent message. This becomes ever trickier as the Tea Party struggles to cope with some of the wackier elements that have glommed onto its energy (e.g., birthers, 9-11 truthers, and white supremacists). Pretty much everyone gets that Tea Partiers are mad as hell, it's just increasingly hard to tell about what.

With the health care meltdown, the situation threatens to come to a head. Sooner rather than later, Tea Partiers will need to decide whether to continue as a pure protest movement or evolve into a serious political party. And while Option A may seem more exhilarating — I mean, who doesn't enjoy flouncing around in tricorner hats and brandishing teabags? — I'm rooting for Option B, in the (admittedly faint) hope that the movement could wind up having a constructive rather than destructive impact on our political system.

As the economy recovers, the level of public anger and panic will fall. That's just the way things work. But even in fat economic times, there remain plenty of angry, scared, even paranoid people around, and these people need a place to come together and be heard. For a while now, the Republican Party has tended to be that place. While the Democratic Party has been shifting to the middle in recent years, the GOP has been drawn steadily toward the angry fringe. If the Tea Party remains just some mouthy, disruptive, vaguely threatening force with no real structure or accountability, this trend is likely to continue, steadily poisoning the GOP.

As an actual third party, however, the Tea Party could play a different role in American politics: providing a haven and platform for the disgruntled and disillusioned, while freeing the GOP to try and regain some broad-based appeal. Yes, in the short term, Republicans would likely suffer even greater losses as TP candidates siphoned off some of the GOP's far-right supporters. (A new Quinnipiac poll found that 74 percent of Tea Partiers consider themselves Republicans or Republican-leaning Independents.) But, faced with possible extinction, Republicans would have strong incentive to retool into a party that could once again speak to independents and conservative Dems. This development would benefit the entire republic. A vibrant two-party (or multi-party) system is a good thing. What we have right now is scary.

For this to happen, however, a leader will need to rise up — soon — and bring order to the swelling Tea Party chaos. This is no small task considering the inherent quirkiness of this grassroots phenomenon. Despite all the talk of ideological purity, Tea Partiers aren't defined by their ideology so much as their attitude, meaning that any aspiring leader would not only need to toe a strict (very strict) conservative line but also display a handful of characterological attributes:

1. Anger. The more the better.

2. Paranoia that the other side is out to get you.

3. A self-righteous conviction that the other side is not merely wrong but irretrievably evil. (To be fair, this is pretty much a requisite for leadership in any political party these days.)

4. Sympathy (or, better still, empathy) for the victim mentality, ideally coupled with burning resentment that the other side looks down on you.

There are plenty of figures on today's political stage who display some combination of these traits, but few seem to possess the potent blend that Palin does. Florida's Tea Party-championed Senate candidate Marco Rubio talks a good conservative game and is quite the charmer, but he doesn't seem convincingly angry and paranoid enough to actually lead the movement. South Carolina Senator Jim DeMint seems plenty disaffected, self-righteous, and paranoid, but he doesn't exactly ooze star power. The tough-talking Liz Cheney, fast establishing herself as Dick in a dress, is arguably angry, self-righteous, and paranoid enough, but her star shine is more reflected than inate, and she seems to lack the proper victim mentality (although she is clearly plenty aggrieved at how dear ol' dad has been mistreated). Glenn Beck is an intriguing possibility. Arguably no one is more outraged, paranoid, self-righteous, famous, and convinced of his enduring victimhood than Fox's weepy circus clown. That said, guiding Tea Partiers into the land of serious electoral politics calls for a leader who seems less crazy than the fringiest elements now causing the movement such grief. Glenn Beck—like his congressional soulmate Michele Bachmann—may simply be too nuts to qualify.

Palin, on the other hand, may be exactly nuts enough. As Noam Scheiber so deftly detailed in 2008, the former governor is in large part defined and driven by her bitterness toward and resentment of those she suspects are looking down on her. During the White House race we certainly saw ample evidence of Palin's paranoia, self-righteousness, anger, and penchant for playing the victim. And there is no shinier star in the conservative firmament. Period. With this kind of cred, it's unsurprising that Quinnipiac found that 72 percent of Tea Partiers view Palin favorably (versus 33 percent of overall voters).

Is Palin a perfect fit? No. She's still out there stumping for Tea Party-despised John McCain. And, to be fully embraced, she'd likely need to leave the GOP and issue a variety of disparaging remarks about its establishment. But many in this establishment didn't exactly cheer her addition to the '08 ticket, so she shouldn't have much trouble mustering the necessary bile. My guess is that Palin could emerge as a unifying Tea Party leader with very little effort. Actually whipping the movement into shape would require some heavy lifting, but she could always bring in aides and advisers to help with that. Admittedly, the experience wouldn't be all fun and games. But as far as patriotic pursuits go, it beats the hell out of teaching TLC viewers how to field dress a moose.