Accessibility links
Easy Writer: Bikers Risk Texting On Vietnam's Roads Everyone knows that texting while driving isn't smart. Now consider this: texting while driving a motorcycle, in heavy traffic. It's not uncommon in Vietnam, where motorcycles are the primary source of transportation. And it's got public health officials worried. 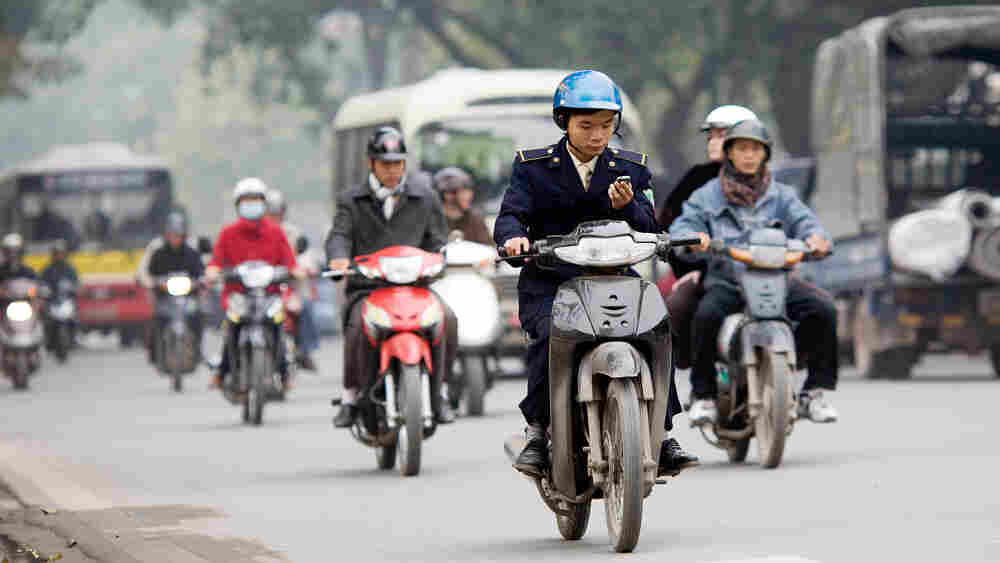 Motorcycles are the primary form of transportation in Vietnam, and public health officials are raising the alarm about a new road hazard: texting while driving. Here, a man checks his cell phone while driving in downtown Hanoi, Vietnam, in January. Jeff Holt/Bloomberg via Getty Images hide caption 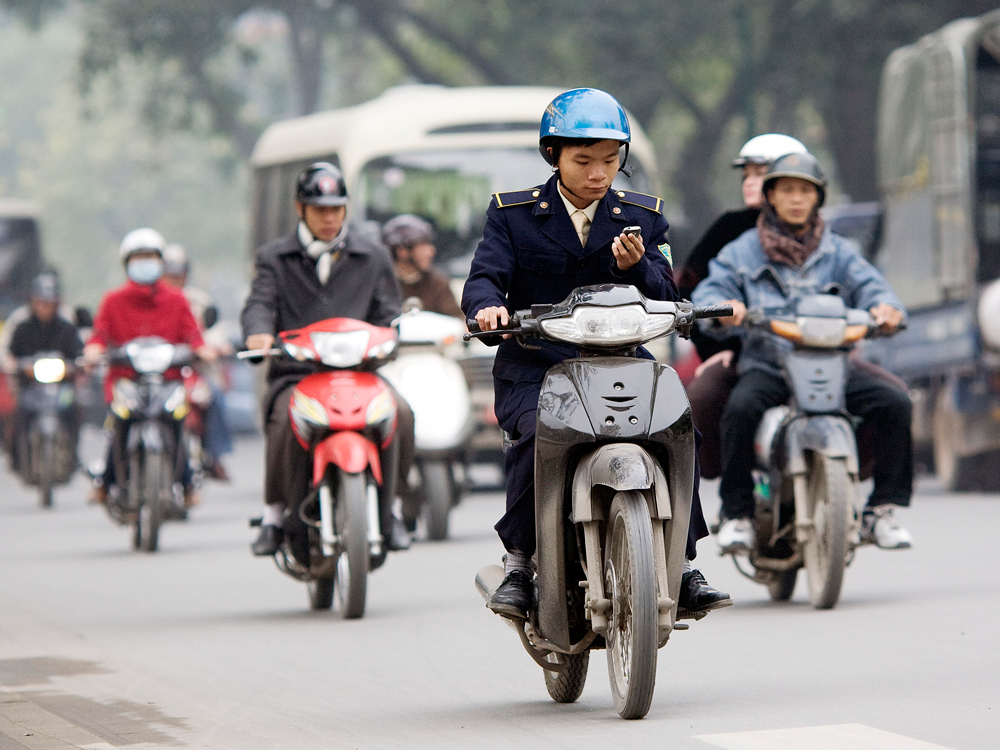 Motorcycles are the primary form of transportation in Vietnam, and public health officials are raising the alarm about a new road hazard: texting while driving. Here, a man checks his cell phone while driving in downtown Hanoi, Vietnam, in January.

And it's got public health officials worried.

Pham Thi Thuy Linh is 21, a college student and — according to a recent contest sponsored by a mobile phone company — has the fastest fingers in Vietnam.

She says she can text 160 characters in 25 seconds, though she says she is a little slower texting with her eyes closed — or when driving her motorcycle.

"I think I'm about 20 or 30 percent slower texting on my bike. And it's easier to make mistakes because I'm trying to watch the road in front of me," Pham says.

She doesn't much care that texting while driving is both illegal and not too smart. And she isn't alone.

Vietnam may be a one-party state where political dissent isn't tolerated. But forget about traffic laws in this country where 29 million motorcycles, bad roads and a lot of people in a hurry make for a dangerous ride.

On a recent day, the floor of the emergency room at Hanoi's Viet Duc hospital is littered, literally, with patients. By early evening, there are more than 100 — the vast majority of them victims of traffic accidents.

Dr. Doan Quoc Hung, chief of the emergency room, calls traffic accidents a "national calamity." He says it is a public health emergency that's getting worse every day. And incidents involving people talking or texting while driving are becoming more common, he says.

I think I'm about 20 or 30 percent slower texting on my bike. And it's easier to make mistakes because I'm trying to watch the road in front of me.

It's dangerous not just for them, but for the drivers around them, too. Hung says the hospital performed 14 operations on this day, and all but three were the result of traffic accidents.

Most of these accidents simply don't need to happen, Hung says. And caring and paying for the injured and the dead puts a burden on both their families and society, he says. The hospital should be treating people with real illnesses, he says, and not spending so much time dealing with this.

Tran Van Thanh is a senior official in the government's office of traffic safety. He understands the concerns about texting while driving, but says people's bad habits will take time to change.

He says that with limited resources, it's impossible to crack down on everyone for everything. Drunk drivers and reckless drivers are the priority now, he says, adding that the rest will come later.

At Viet Duc hospital, neurosurgeon Nguyen Duc Hiep is worried that later won't be soon enough. His head trauma unit is full of accident victims. And while he knows driving under the influence is still the chief cause of traffic injuries, he worries what will happen next month when local phone companies roll out cheaper packages for 3G phones. He predicts that those packages will lead to more people surfing the Web while on their motorcycles.

It's crazy, Nguyen says, the way people want to be on their phones, talking and texting all the time.

Meanwhile, the texting contest winner, Pham, says she can't wait to get one of the new iPhone packages.

She says it will enable her to text even faster than she does now, from everywhere — including her bike.