Accessibility links
American Led Double Life With Ties To Pakistan-based Islamist Group Suspected Of Ties To Al-Qaida The Chicago man who admitted to a role in the 2008 Mumbai attacks is like a character from a spy novel: straddling two worlds. David Coleman Headley's case raises questions about the ambitions the Pakistan-based Islamist group Lashkar-e-Taiba may have on American soil. 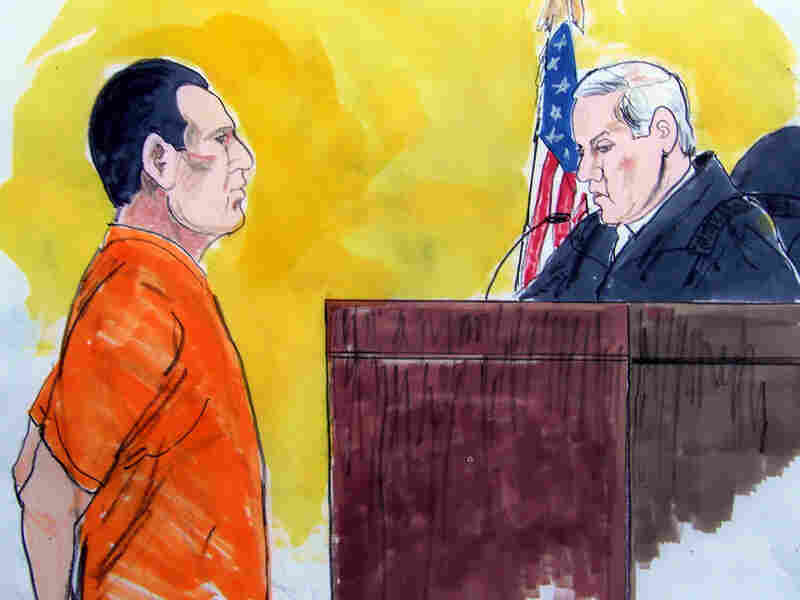 In this courtroom drawing, David Coleman Headley faces U.S. District Court Judge Harry Leinenweber on March 18 in Chicago. Headley pleaded guilty to using his Western appearance as a cover while scoping out sites for the deadly 2008 Mumbai siege and plotting to kill a Danish cartoonist. Carol Renaud/AFP/Getty Images hide caption 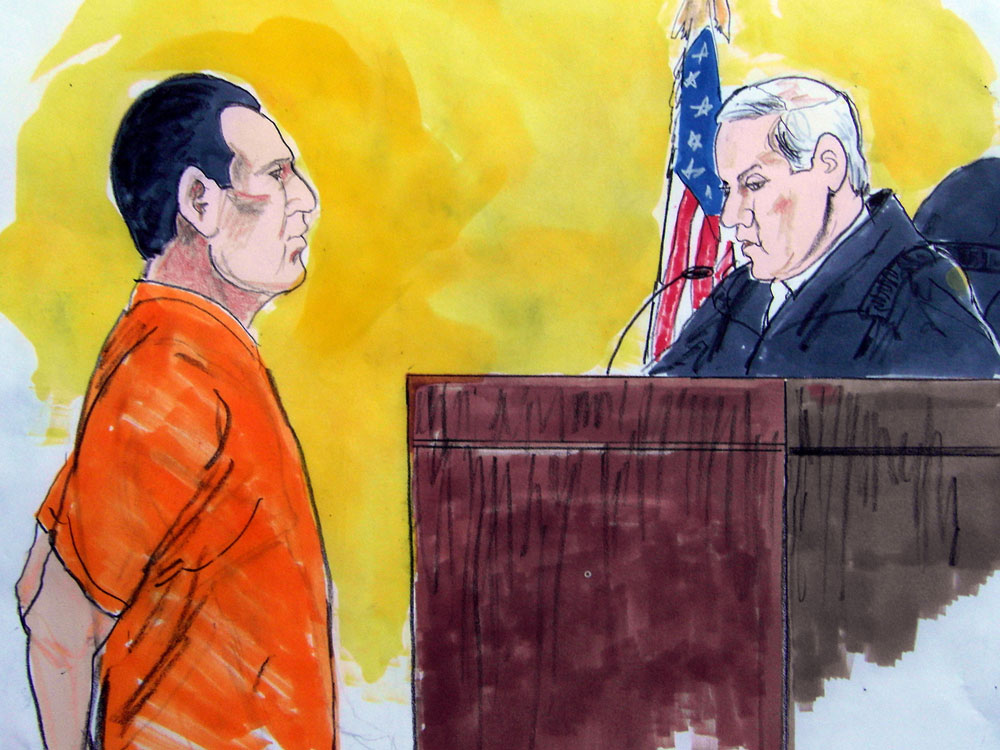 In this courtroom drawing, David Coleman Headley faces U.S. District Court Judge Harry Leinenweber on March 18 in Chicago. Headley pleaded guilty to using his Western appearance as a cover while scoping out sites for the deadly 2008 Mumbai siege and plotting to kill a Danish cartoonist.

The bio of David Coleman Headley reads like a spy novel. The Chicago man who pleaded guilty this month to a role in the 2008 Mumbai attacks is the character who straddles two worlds, and leads a double life.

Headley's mother was an American, a Philadelphia socialite. His father was a Pakistani diplomat. Headley enjoyed all the benefits that such a life can provide. As a young man, he attended elite schools in Pakistan and the United States, traveled often to South Asia and, with his American passport, attracted little attention.

In fact, he drew so little notice that U.S. officials were unaware until relatively recently that he was building ties with militant groups in Pakistan.

Among other things, he attended training camps run by a Pakistan-based Islamist group called Lashkar-e-Taiba and met with operatives from al-Qaida. While Lashkar claims to be focused on the tensions between Pakistan and India, U.S. officials say Headley is just another example of how the group's aspirations are growing.

Now the chief concern of those officials is that Lashkar has recruited other Americans and intends to eventually send them back to attack the U.S.

I think LeT is very sophisticated and will continue to try to recruit individuals like the David Headleys of the world that can help them conduct attacks in India and elsewhere.

Rick "Ozzie" Nelson of the Center for Strategic and International Studies

"The issue with David Headley was very serious," says Rick "Ozzie" Nelson, who tracks counterterrorism at the Center for Strategic and International Studies. "Not only was he recruited but he actually went overseas and conducted some very technical operations vis-a-vis surveillance and mapping of targets. And that's a higher level of support than we've seen. I think LeT is very sophisticated and will continue to try to recruit individuals like the David Headleys of the world that can help them conduct attacks in India and elsewhere."

Headley is considered so important because of what his ties reveal about Lashkar's ambitions. While India remains the group's principal target, experts say Lashkar has been waging a low-grade holy war against the United States for at least a decade.

Consider the Virginia Paintball case from 10 years ago. In 2000 and 2001, the FBI arrested a group of men playing paintball in the woods of Virginia. The men were using paintball games to do their own form of military training. Court papers revealed they had a Lashkar connection.

"Two of those people trained with Lashkar-e-Taiba before 9/11, and four of them trained with them after 9/11," says Stephen Tankel, a visiting scholar at the Carnegie Endowment for International Peace, who has a book on the group coming out in June.

"This is again a very good example of how LeT not only trains Westerners but how it then used them. There are rumors that one of them might have asked to do reconnaissance in the U.S., but nothing ever came of it. Again, this was a way for LeT to grow its network."

The group's network is already vast. While it is based in Pakistan, it has people in the Persian Gulf, Europe and North America, and operatives as far away as Australia. "This is a group with transnational networks that they are not necessarily going to use for attacks outside of South Asia — but that they could," Tankel says.

U.S. officials haven't been able to do much about Lashkar-e-Taiba for political reasons. While Lashkar was supposed to be outlawed in Pakistan in 2002, court papers in the Headley case show it still has ties to former Pakistani military officials. And that makes it difficult to short-circuit the group.

"We have been very reluctant, even after Mumbai, to put pressure on the Pakistanis because we understand very well that Lashkar-e-Taiba is the preferred organization of the army, the Pakistan army, and their intelligence agency, the ISI," says Christine Fair, a fellow at West Point's Combating Terrorism Center and a professor at Georgetown University. She says Lashkar will continue to be protected as long as it is seen as a hedge against what Pakistan sees as its No. 1 enemy: India.

But the development that most worries U.S. intelligence officials is that Lashkar is running training camps specifically for Westerners, who then can find their way to al-Qaida and the Taliban.

That's the route David Headley took. It turns out Lashkar-e-Taiba actually introduced him to an al-Qaida operative in Pakistan. U.S. officials uncovered Headley's connection to the Mumbai plot because they were watching the man from al-Qaida.