Accessibility links
Palin: The Next Oprah, Or Next Oval Office Occupant? Despite stubbornly high national unfavorable ratings, Sarah Palin's public profile continues to climb. Republican politicos in Iowa and New Hampshire say the former Alaska governor could be the top GOP contender in those key early primary states in 2012. That is, if she wants it.

Palin: The Next Oprah, Or Next Oval Office Occupant?

Palin: The Next Oprah, Or Next Oval Office Occupant? 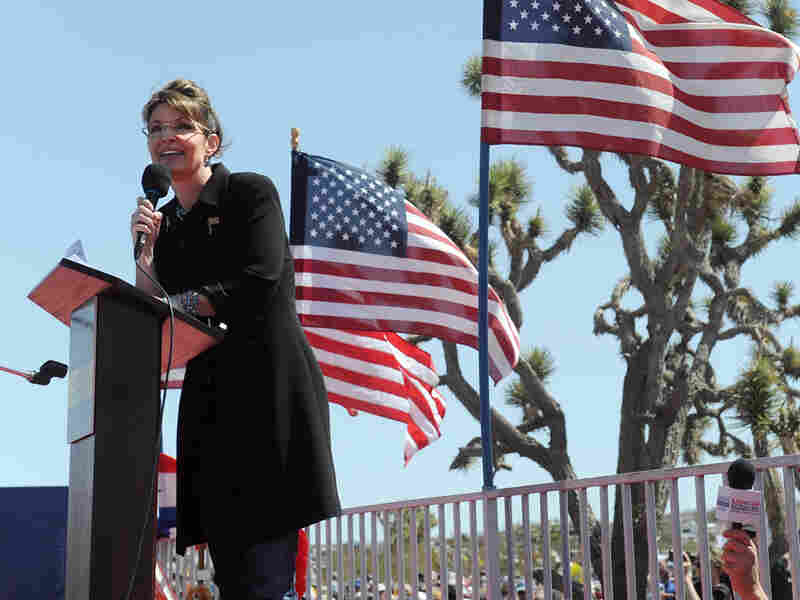 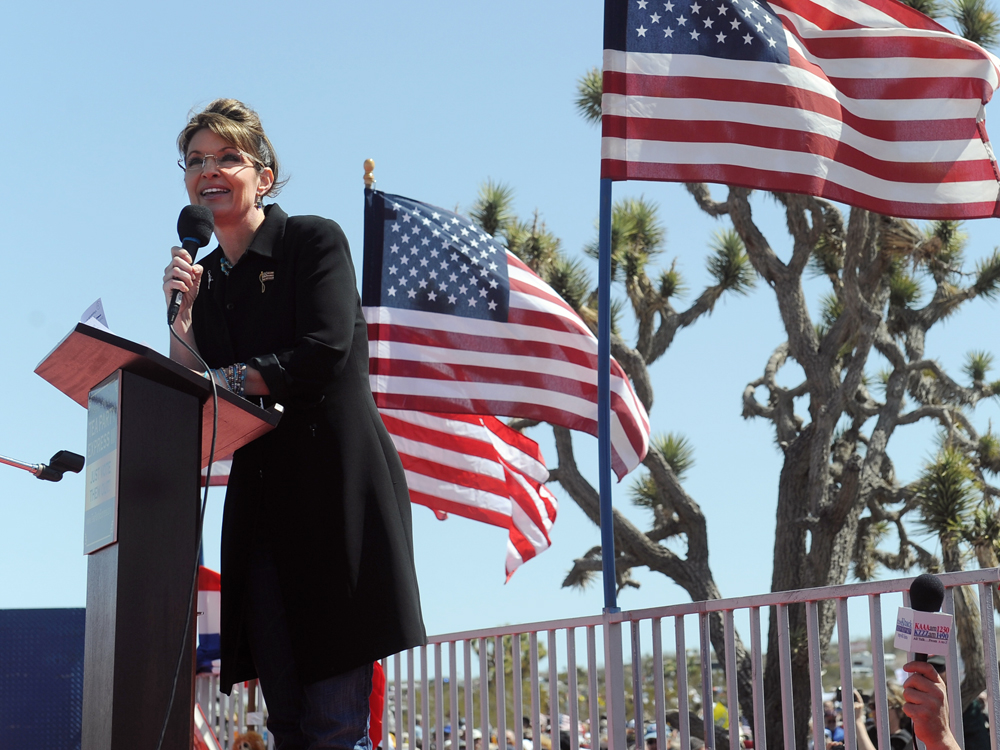 Sarah Palin speaks at a Tea Party rally in Searchlight, Nev., on Saturday. Thousands of Tea Party activists were in attendance.

Former Alaska Gov. Sarah Palin may still be a reliable butt of late-night comedians' jokes, but her public profile continues to climb.

And though Palin's national unfavorable ratings remain stubbornly high, her "SarahPAC" political action committee has raked in more than $2.2 million, and her 2009 autobiography was a best-seller.

Republican politicos in Iowa and New Hampshire say that Palin could be the top GOP contender in those key early primary states in 2012.

That is, if she wants it.

'It Doesn't Hurt To Be A Celebrity In Politics'

"Currently, Sarah Palin can raise more money and generate more excitement among likely Republican primary voters than any other politician," says Sarah Crawford, a New Hampshire-based consultant who was a senior McCain adviser during his 2008 presidential run.

Palin's favorability ratings were at their highest — approaching 55 percent — just after GOP presidential nominee Sen. John McCain chose her as his running mate in August 2008, according to data at Pollster.com.

Now, the percentage of those who view her unfavorably exceeds 50 percent, with 36.8 percent saying they view her favorably. (President Obama can relate: His approval rating has sunk from a post-election high of close to 70 percent to just under 50 percent.)

But while other GOP presidential wannabes have started collecting frequent-flier miles traveling to Iowa and New Hampshire (2008 candidate Mitt Romney was back in Iowa on Monday), Palin is keeping her party guessing.

Will she remain a conservative lifestyle celebrity a la Oprah, satisfied with raking in millions as a television pundit, speech giver and reality television star?

Or is she, as her hard-core fans insist, a Ronald Reagan-style presidential candidate in the making?

The two paths, as many have noted, are not mutually exclusive.

"She's a political celebrity — and it doesn't hurt to be a celebrity in politics," says Douglas Gross, a lawyer and top Republican in Iowa who chaired Romney's state effort in 2008. (But don't suggest that to McCain, whose presidential campaign repeatedly attacked candidate and future President Barack Obama as a celebrity.)

Palin, says Gross, who has not gotten behind a candidate yet, could win in Iowa if she wants it.

Star Of The Tea Party

It was Palin who popularized, if incorrectly, the term "death panels" during the tumultuous health care debate that gripped the nation over the past year. And she has recently been criticized for using her Facebook page to urge supporters to "reload" in their fight against Democrats — using cross hairs to "target" members of Congress on an election map.

But Palin invariably draws crowds and media attention that other politicians envy. And she is unapologetic, rhetorically speaking.

Her "reload" comment was "not inciting violence," she said during her appearance Saturday at the cold, windy Tea Party rally in Nevada, which drew 8,000 anti-Washington demonstrators to Senate Majority Leader Harry Reid's hometown of Searchlight.

"What that is doing is trying to inspire people to get involved in their local elections and these upcoming federal elections," she said. "It's telling people that their arms are their vote."

A day earlier, many in the throngs who showed up at her appearances in Arizona said they had come to see her and not McCain, who faces a tough primary challenge from conservative radio host and former Rep. J.D. Hayworth.

The Tea Party, she told the crowd at the McCain event, is a "beautiful movement."

"We are all that Tea Party movement," she said, as McCain smiled and applauded behind her.

But some movement members let Palin know that they weren't happy with her support of McCain. Many commenting on her Facebook page encouraged her to stop stumping for the man who made her famous.

"Please drop your endorsement of him," wrote Michael Monascalso in a post on Friday. "You will only tarnish your political career."

Celebrity Or The Presidency — Mutually Exclusive?

Palin resigned her governorship with 17 months remaining in her first term; she has been positioning herself as a national figure since. Her latest headline-grabbing move was signing on for an eight-part documentary that Discovery Communications acquired for its TLC channel.

Where many see her as a made-for-television phenomenon, others are not so quick to discount her power and the influence she holds with Republican primary voters — and especially Republican women.

GOP strategist Cameron Lynch, however, says that he views her future path as a "combination of Rush Limbaugh and Oprah Winfrey, with maybe a tad bit of [former Republican House Speaker] Newt Gingrich mixed in."

At the recent national Conservative Political Action Committee conference in Washington, Palin was a distant third in a presidential preference poll, trailing both Texas Rep. Ron Paul and Romney.

But conservative Norman Podhoretz warns that Republicans would be wise not to underestimate Palin politically. In a Wall Street Journal column published Monday and titled "In Defense of Sarah," Podhoretz asserts that "Sarah Palin is no Ronald Reagan."

But he says that derogatory things said about Palin are similar to criticisms lobbed at the "B-movie star" presidential candidate Reagan, who was derided by some conservatives as "not only stupid but incompetent."

Ordinary conservatives, Podhoretz argues, "rightly see her as one of them."

And though the prospect of a Palin presidential run may make many Republicans wince — and Democrats rejoice — it remains well in the realm of possibility.

"During the health care debate, she wasn't an intellectual leader," said Gross, the Iowa Republican. "But she crystallized a message."

"She tends to give voice to what a lot of Republicans are thinking about," he says.

But can Palin can translate excitement and ability to raise money into a legitimate presidential run? Former McCain adviser Crawford says that remains unclear.

"Of all the top-tier potential 2012 candidates, I think that Sarah Palin has done the least to start organizing in New Hampshire," says Crawford. "That's problematic if she is serious about running for president."

In Iowa, however, where former Arkansas Gov. Mike Huckabee beat the wealthy Romney in 2008 with a shoestring organization and little money, politicos know that stranger things have happened.

"If she wants to run for president," Gross predicted, "the door's wide open."