Accessibility links
For Right, Health Care Renews A Familiar Rage The ugly rhetoric and threats surrounding the health care law have been intense — but they're nothing new. Some politicos see echoes of past populist movements from the right, such as the recent militia movement. Others note that quite a bit of abuse was also hurled against President Bush. 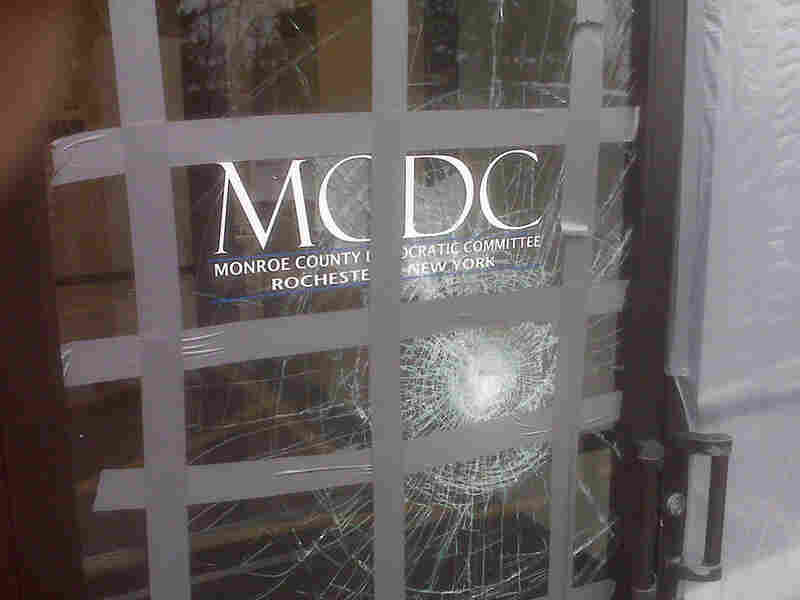 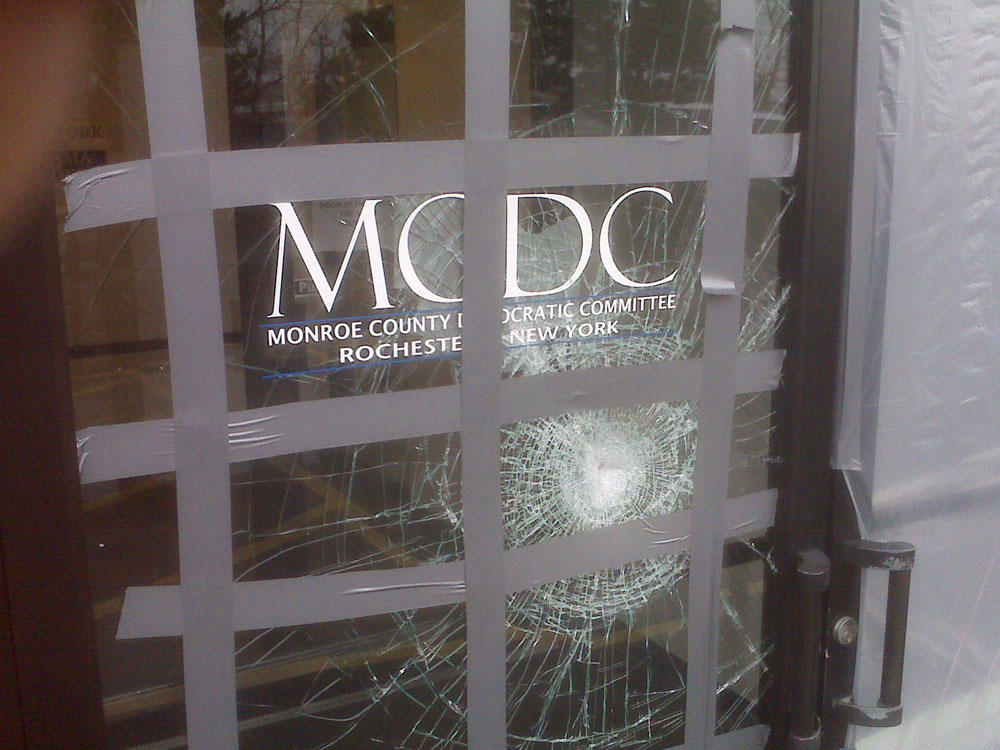 This March 24 picture shows damage to the Monroe County Democratic Committee in Rochester, N.Y., after a glass door was struck with a brick, with a note reading "Exremism [sic] in Defense of Liberty Is no Vice" sometime between late Saturday, March 20, and Sunday, March 21.

The ugly rhetoric and threats surrounding the health care law have been intense, but they're not new.

Though conservative anger with Washington over the newly signed bill has been particularly hot, some longtime political observers see a revival of previous populist movements from the right.

We've Seen This Type Of Anger Before

The day before the health care vote, protesters on the Capitol lawn chanted that lawmakers should "kill the bill," but that had been a theme for the bill's opponents since last summer — back when those confrontational town hall meetings caught many Democratic members of Congress off guard.

And it's only gotten louder in recent weeks.

"Everything the government touches goes bankrupt!" a woman shouted at a Columbus, Ohio, rally earlier this month.

Since then, the rhetoric has gone further, including calls to take up arms, and threatening phone calls to the offices of Democrats who voted for the bill. Add these to all the other common topics for placards held aloft at anti-Obama protests: signs featuring images of President Obama as Hitler, accusing him of being a Marxist, claims that he's a Muslim, and that he is not an American citizen.

Chip Berlet with Political Research Associates, a liberal group that tracks populist anti-government movements, says this is nothing new.

"It happens periodically throughout U.S. history, and it happens when people are very angry, but they sort of focus that anger on conspiracy stories in which their political opponents are portrayed not as having ideological or political differences, but in fact are out to destroy America," Berlet says.

Berlet cites the militia movement of the '90s as the most recent incarnation of such anger. But there are plenty of other examples. In the early 1800s, people said the Freemasons were out to destroy America. Later that century, he says, people feared that the Pope was digging a very long tunnel indeed as part of an elaborate plot against the United States.

"The tunnel from the Vatican to the United States was going to allow all the papists from Europe to just rush over and take over America," Berlet says.

With this past week's threats of violence, Berlet says he worries that the current state of rhetoric will lead to actual violence.

"I don't see people stepping back from the abyss, and that's what leaves me very worried," Berlet says.

But Michael Cromartie of the Washington-based Ethics and Public Policy Center makes another point. He says it's not unlike the storm of abuse hurled at President Bush, his staff and other Republicans during debates on Iraq and the Patriot Act, and other issues.

And as for Democrats and others who openly speak of their concerns about potential violence? "Well, I don't want to be one to say that it can't happen," Cromartie says. "But at the same time, people's emotions are running high, and people are in the street.

"But people's emotions have been running high on disagreements in American public policy" quite frequently in the past few decades, he says.

Cromartie adds that the rhetoric today is alarming.

"Civility needs to be practiced on all sides, conservative and liberal. But the fact of the matter is, I think we can do this without people getting out of control," he says.

Both Cromartie and Berlet agree that political leaders in both parties should seek to channel these emotions and restrain them, in part by moderating their own language — even if they can't find ways to work together when it comes to policy.