Accessibility links
Young Imam Serves as Islam's Face to Community Sheikh Rashid Lamptey, the new imam at the Dar Al Noor mosque in Virginia, plays a dual role: He's the face of Islam to his congregation and to Americans who might be wary of Muslims. 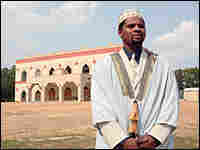 Sheikh Rashid Lamptey, the new imam at Dar Al Noor, says, "Muslims have to be careful, because they have a picture that is not nicely painted of them." David Kidd for NPR hide caption 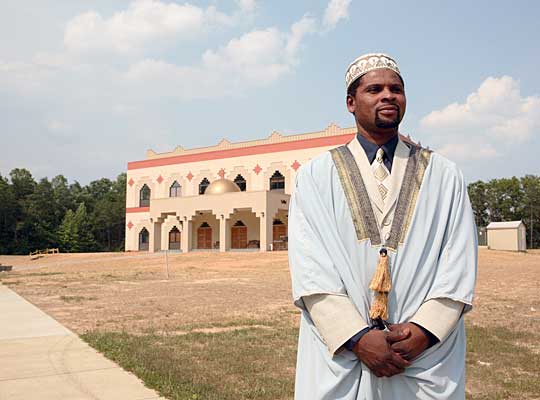 Sheikh Rashid Lamptey, the new imam at Dar Al Noor, says, "Muslims have to be careful, because they have a picture that is not nicely painted of them." 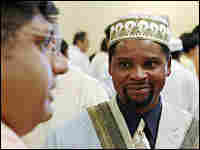 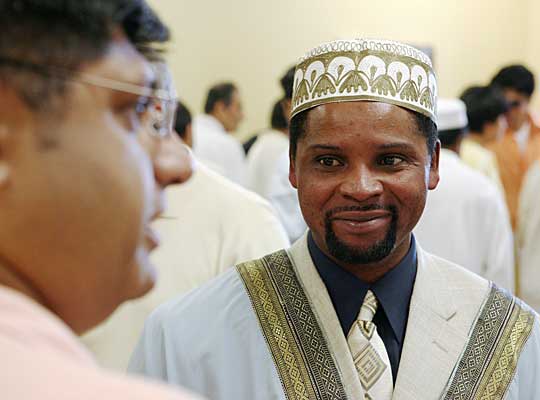 In a yearlong series, NPR follows the new generation of spiritual leaders. 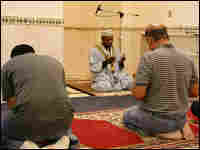 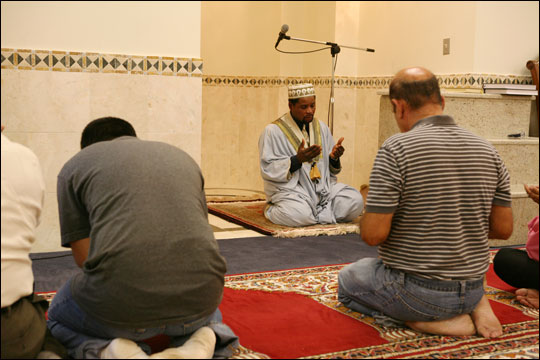 The day is sunny and hot, the hamburgers are on the grill, the kids are jumping on the moon bounce and about 400 people are milling around the brand new Dar Al Noor mosque in Manassas, Va.

Neighbors and members of the congregation are here — even Virginia Gov. Tim Kaine is coming. James Dade, a non-Muslim who lives nearby, is manning the grill. As he hands a burger to a Muslim friend, he turns and gives this assessment of his new neighbors.

"They're very friendly, very helpful, very community-oriented," he says, noting that his best friend attends Dar Al Noor. "If there were more Christians like my friend, we wouldn't have any problems in this world."

It is a happy appraisal on this happy Sunday afternoon in July — the ribbon-cutting ceremony for the new mosque. Sheikh Rashid Lamptey, the new imam, can barely contain his excitement as he waits for the governor to arrive.

Lamptey is serving a growing mosque in one of America's fastest-rising religions — with more than 2 million faithful to date. The imam plays a dual role: He's the face of Islam to his congregation and to Americans who might be wary of Muslims.

"Look!" says Lamptey, who is slim with dark skin, in contrast to his white robes and a perpetual grin on his face. "Everyone is here: the politicians, the security men, the people who protect us. We have their trust, they have our trust. This is what we want to establish — the trust, so we can work together towards a more peaceful community."

A few moments later, the imam introduces Kaine. The governor greets the crowd in Arabic, eliciting applause from his Muslim onlookers, then speaks about America as the bastion of religious freedom.

"We like the way he is," Lamptey remarks, satisfied. "He is an outreach person — reaching out and bridging the gap, building bridges and getting closer to us. That is what we want. We want to be included."

But drive a half-mile and the reception is chillier. People outside of the Safeway grocery store in Manassas are not clear what goes on at the mosque down the road. One person asked if they sacrifice cows. (The answer is no.) Seventeen-year-old Amanda Weeks said all she knows is what she learned in high school.

"I know that the men and women are separated when they pray," she said. "And they take off their shoes and they wash before they go in. That's about it."

Others were a bit more suspicious.

"I wouldn't say that it's the Muslims who are the terrorists," said nearby resident Johnny Wilson. "But they do some things that cause some concerns for me."

Such as? A 10-second pause ensued while he considered the question.

"You know, off the top of my tongue I can't name any," he said, laughing, "but they do some things that cause some concerns."

Brianna Altman, who works for local government, has more specifics. She worries that Muslims present a peaceful front to the outside, but may have a political or religious agenda.

"And after 9/11 — and we had over 20 people in this community who lost their lives that day — it makes you think," she said. "It's very difficult. It takes a leap of faith, really, to believe that they are here peacefully."

Imam Sheik Lamptey has his work cut out for him, and he knows it.

"Muslims have to be careful, because they have a picture that is not nicely painted of them," he said in his office one muggy July day, as a ceiling fan whirred on high speed. He wore a blue prayer cap, a navy suit and a royal blue shirt that billowed a bit over his slim frame.

Hearing the Call to Service

Lamptey was born in Ghana, the fifth of eight children. Ghana is predominately Christian, but Lamptey's father was an imam, a very religious man. The kids were less devout.

"Growing up, the kids prayed when it was time to pray, but we didn't care so much about it," he recalled. He paused. "Until I had this epiphany about doing something about my religion."

When he was 16, Lamptey "did something" — in the form of intense investigation. He says he started with the premise that all religions were equal, "a clean sheet," as he put it. He studied Christianity, Judaism and Islam. After many years of studying the sacred texts of each faith, Lamptey came to believe that religions were at root the same, and he eventually settled on the faith of his childhood.

Lamptey won a scholarship to university in Sudan. He earned two masters' degrees, in Arabic and Islamic studies, which qualified him to become an imam. But Lamptey had no intention of doing so. He became fluent in Chinese and moved to Beijing to teach at a university. And that's where he was when he was called to be a spiritual leader — not by God, but by his friends in Ghana.

"I received letters from Ghana saying, 'Look, you went and studied. Now you need to come back home and help the people,'" he recalled. "So I immediately packed my stuff and went back home."

Soon, Lamptey was appointed Ghana's deputy national imam, becoming the No. 2 cleric in Ghana. He was 23. He served a large mosque and appeared frequently on national television and radio. It was on radio that he caught the attention of a Fulbright scholar from Connecticut named Jerusha, a young woman who had converted to Islam.

"She used to give me a ride to the radio programs," he said. "She would say, 'I'll come and pick you up and give you a ride, because I like to hear you speak on the programs.'" He smiled at the memory. "That's where we got acquainted with each other."

Eventually, Jerusha returned to the United States. She left a gaping hole in Lamptey's heart — and in the practice of his faith. In Islam, he says, duty to God is only half of the religion.

"The other half is duty to your spouse, because in that half, that is where you get tested a lot," he observed. "And so I decided this is the time for me to go into marriage. And I looked around and I realized, well, she sounded very religious, and at the same time, very attractive. So I said, 'OK, let me settle down with this beautiful lady.'"

The imam visited Jerusha's family in the fall of 2002, courtesy of the U.S. government, which had invited young foreign imams to tour the United States. On that trip, Lamptey traveled to New York to see the wreckage of the Twin Towers himself. He could scarcely believe what had been done in the name of his faith.

"I stood at Ground Zero, camera in hand," he recalled, his voice going deadly quiet with anger. "I tried to find a reason for people to do that. No reason appeared. I tried my very best. I couldn't find one simple reason that says we can throw a bomb or put an airplane into a building. I felt the melancholy, the weight of it, and I said, the time has come for us to stop using religion for ulterior motives, and teach people what religion stands for."

Now Lamptey has his chance — as the new imam at Dar Al Noor. And while Lamptey must always contend with hovering suspicions about Islam from the outside, he spends most of his time tending to the spiritual needs of his own congregants. When he arrived in the United States, he found himself smack in the center of a debate on how half of his congregants should be treated.

"This may sound controversial to a lot of people," he said, "but that is the fact that men and women can pray in the same room. Though the women are delayed behind the men, they should be in the same setting. The women should not be taken far away and hidden from the public. Because that was not what the prophet did. And it's more of a cultural issue than a religious issue."

At noon prayers one day, when Lamptey told the women to move forward and participate in the service, visitors in the room looked around, surprised, before moving forward. Lamptey said in Dar Al Noor, it would be an outrage to treat women with little respect. Many of them sold jewelry and other valuables to raise money for the $14 million mosque.

"After the women did all this, I do not believe we can relegate them to the footnote."

The imam's duties range from spiritual guide to resident psychologist, sorting through the never-ending details of his people's lives. The work begins with 5 a.m. prayers and ends when Lamptey drags himself home, often after midnight. In between prayers, he teaches the Koran and youth class. He preaches at funerals and weddings. He counsels parents and children, couples in love and those in distress.

"It's a very huge responsibility to be an imam," he said. "Being an imam, you are exposed to everything in a community. You hear stories from families. Secret deals. Things that you don't expect to hear on people's private issues."

Almost as he uttered these words, Lamptey glanced out his door to see a woman and her mother outside his office. They had been waiting for two hours. He rushed out and ushered them in.

The woman, Sophia, had been abandoned by the man she married in Pakistan — a situation fairly common to U.S. imams, as most of their congregants are first-generation immigrants. Sophia wanted the imam to sign her divorce papers, to give the divorce religious as well as legal legitimacy. Lamptey granted her request and then looked at her across the desk.

"To tell you the truth, this is a blessing in disguise," he said gently. "At least he has not stained your life. He has just run away like a chicken." She laughed. "And tomorrow you'll find a real man, and you'll be happy then. You'll forget about this man."

Lamptey promised to find a match for Sophia — indeed, he is compiling a computer database of eligible singles. He told her he will help her reshape her future. It's the same message he is delivering to his congregation as they negotiate their spiritual lives in a post-Sept. 11 America.

Lamptey rose to leave. It was time for evening prayer — a reminder for the imam that, even in a new country, he can take comfort in the ancient rhythms of faith.