Accessibility links
After Quake In Haiti, Who's The Boss? Governments and international aid agencies pledging to help Haiti say they want to take their lead from the Haitian government. But the government in Haiti remains extremely weak, and in the everyday life of many Haitians, it seems to be missing in action.

After Quake In Haiti, Who's The Boss? 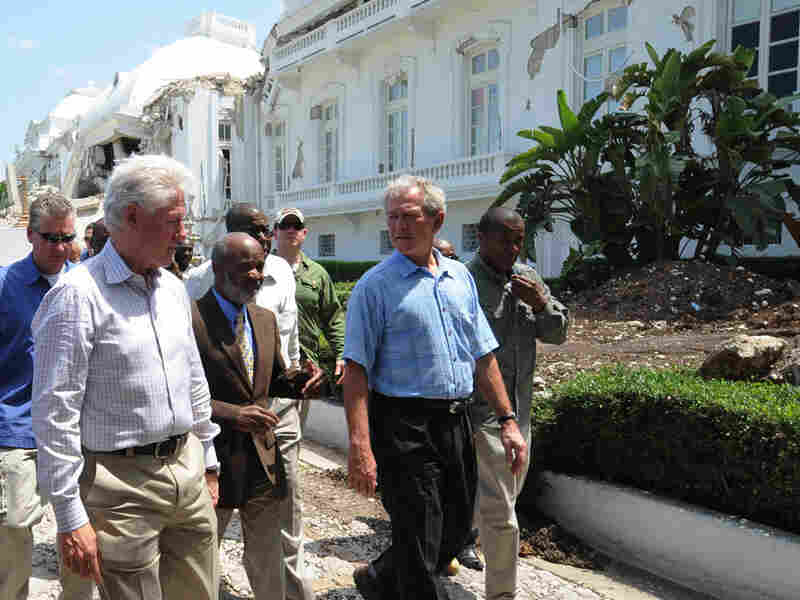 The Haitian government was hit hard by the Jan. 12 earthquake. Not only did key buildings such as the presidential palace collapse, but the quake also claimed the lives of many civil servants.

In fact, some in Haiti say the time when the quake hit — 4:53 p.m. — meant that it killed a disproportionate number of the government's most diligent officials, those who were still at their desks after the usual closing time for government offices.

Now, almost three months later, the Haitian government has a plan for rebuilding itself and the country with billions of dollars from foreign donors. Officials from the United States and other donor nations will meet at a U.N. conference in New York on Wednesday to discuss repairing Haiti's economy and infrastructure.

But some Haitian politicians do not like what they are hearing.

The president of the Haitian Senate, Kelly Bastien, is especially worried about the plan's creation of a new "interim commission" to manage projects funded by other countries. The commission threatens to become a parallel parliament, he says, and the worst part is that it will include representatives from foreign governments — such as the United States and Brazil — as well as international banks.

"I know they have their own priorities, because they're the ones donating the money," Bastien says. "But we Haitians should manage it, because we're the ones who'll be rebuilding the country."

In one version of the Haitian government's plan, foreigners would have most of the votes on the interim commission, a foreign legislative majority subject only to the Haitian president's veto.

'We Make The Law'

Lionel Edouard, who covers politics for the Haitian newspaper Le Matin, is worried about what he regards as increasing foreign control of his country.

"If we are an independent state, we have to make decisions. We know what is good for us," Edouard says. "If other nations take decisions in our place, that will be not good for ... Haitian people."

At the same time, Edouard acknowledges that the country's government is missing in action.

Edouard is one of the hundreds of thousands of people left homeless by the earthquake. He now lives in an encampment on the grounds of a Catholic monastery. He says 5,000 people live there now, and they have yet to see any representative of the government, the mayor's office or even the police.

So, as in most of the homeless camps in Haiti, the residents have formed their own camp government.

"We make the law to control activities in the camp," Edouard says. "We try to find help."

As weak as the Haitian government is, the foreign aid community says it wants Haitians to take the lead in the reconstruction of the country.

The United Nations' special envoy to Haiti, former President Bill Clinton, recently organized a meeting between camp leaders like Edouard and United Nations officials, to make sure the U.N. was in touch with this new form of local governance.

"It's a constant struggle," Clinton says of the effort to keep Haitians running things. Historically, he says, foreign aid has created dependency in Haiti. This time, he wants it be different.

"I've had two meetings with the nongovernmental groups, and I've said, 'We have to tell everybody that the new mission here is to work ourselves out of a job. Is everybody on board with that?' And they said yes."

But Clinton also needs to convince foreign donors that their billions will not be lost to corruption in the Haitian government. It makes for a delicate balancing act.

"I want it to be more accountable and transparent to the outside world, but I also want it to be something that builds the capacity of the Haitian government," Clinton says.

Last week, when Haitian Prime Minister Jean-Max Bellerive presented the government's recovery plan to the Senate, members complained that it gave foreigners too much power, and that the document sounded too "dependent."

"I hope you sense the dependency in this document" was Bellerive's response. "If you don't sense it, you should tear it up!"

In a moment of frankness that is rare in politics, the prime minister said the humility in the government's recovery plan is intentional — but also temporary.

"I am optimistic that in 18 months, yes, we will be autonomous in our decisions," Bellerive said. "But right now I have to assume, as prime minister, that we are not."