Accessibility links
For Hoarders, The Mess Begins In The Mind Researchers now believe that compulsive hoarding is an anxiety disorder that first emerges early in life and gets worse with time. For many, therapy that focuses on decision-making skills and reducing anxiety is much more successful than simply cleaning out the home. 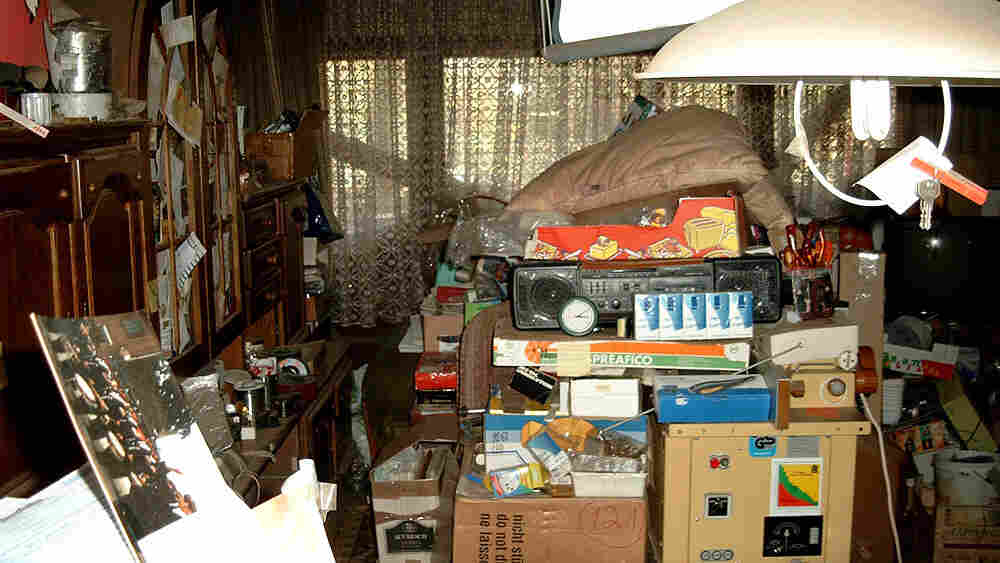 Many people with a hoarding anxiety disorder need to take baby steps in order to cope with organization — like cleaning a bit at a time, rather than getting rid of everything at once. Grap/Wikimedia Commons hide caption

We've all seen the TV shows and heard the stories: people who collect so much stuff they can hardly move in their own home. Some even sleep in the car or yard because their homes are so crammed.

Researchers now believe these people have always been hoarders, and that compulsive hoarding is an anxiety disorder that gets worse with time. Frequently, the problem first emerges in childhood or adolescence. But people often aren't "found out" until they're older, often when their homes present fire hazards or neighbors complain. Unfortunately, there aren't any proven treatments to help them.

Ayers says classic cognitive behavior therapy (CBT) — therapy based on the idea that our thoughts cause our feelings and behaviors — doesn't work well with older adults who hoard. In large part, that's because CBT relies on abstract thinking, which can be difficult for seniors, especially those with certain mental deficits. So in therapy, Ayers focuses on concrete skill building. "We're teaching people how to plan, how to prioritize, how to do basic to-do lists, how to use a calendar, do problem solving," she says.

Armed with these new organizational skills, Ayers hopes her patients will be better able to tackle treatment for their hoarding disorder, which, of course, requires an ability to prioritize, problem solve and, ultimately, make decisions about whether to discard an item.

Ayers practices these organizational skills with patients in therapy over and over again. She helps her patients ask appropriate questions about the practical value and utility of various items. By repeatedly discussing how to sort through items, Ayers says, patients not only learn decision-making skills about items they hoard, they also learn how to tolerate the distress of getting rid of them.

One of Ayers' patients, Cheryl Sherrell, 65, says one of her biggest challenges was a white, fake fur jacket. It was way too small, and she hadn't worn it for maybe 30 years.

Through the process of questioning why she values it and keeps it, Sherrell realized it was not the coat itself, but the memory of being a young mother with babies and toddlers. "I loved being a mom," she says. "I loved having kids home."

But with her children grown, Sherrell learned how to keep memories without keeping the coat. "I did realize that I can keep those memories with pictures," she says, and the coat was therefore relegated to the discard box. Sherrell is proud of her decision, in large part because it was "her choice."

And "choice" is the operative word here. Sherrell says she couldn't just let someone else organize for her and throw out her stuff. "One of the things that I knew intuitively but didn't really understand until it was taught to me here, is that I have to be in control. I can't just let people come in and take over. My anxiety just goes off the wall," Sherrell says.

Emily Saltz is a geriatric social worker in Boston who had a client who was cited by the health department because her condo was dangerously packed with stuff. The condo cleaned out under legal supervision, but within six months, the condo was filled up again.

"And now, a year later, I've been called in because again the health department is involved," says Saltz. "Condemnation is near, and the apartment is absolutely floor-to-ceiling bags, belongings, clutter, junk, bottles and food. And the client herself is actually sleeping in her car somewhere because she can no longer fit into her unit."

When patients are resistant to treatment, Saltz says there are things that can be done to help. She describes harm reduction techniques, where patients agree to some minor changes such as putting all of their stuff in one room and closing the door, or clearing narrow pathways through the clutter to allow access to the kitchen or the living room couch. "Baby steps," says Saltz, "as opposed to we're getting rid of everything! We're gonna make this place safe again!" Drastic overhauls, she says, just don't work.

Sherrell, for one, says her home now looks "normal." But most importantly, Sherrell says she has her life back. She now feels comfortable welcoming her children and grandchildren to her home.